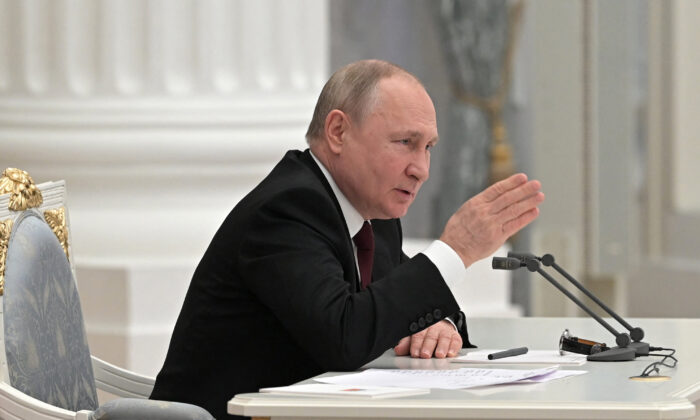 Russian President Vladimir Putin chairs a meeting with members of the Security Council in Moscow on Feb. 21, 2022. (Alexey Nikolsky/Sputnik/AFP via Getty Images)
Europe

Russian President Vladimir Putin on Feb. 21 said that Russia recognizes the independence of the separatist Donetsk and Luhansk regions in eastern Ukraine, which some Western officials say will give Moscow the pretext to send in troops.

Putin, in a lengthy speech, said he will “immediately recognize the sovereignty” of the Donetsk and Luhansk republics. On Feb. 21, the leaders of the two areas, which make up much of the Donbas, requested that Putin recognize their independence from Ukraine.

Before, in his speech, Putin suggested that Ukraine isn’t a real country and believes that it’s “ancient Russian lands.” The modern Ukrainian state, he alleged, was created by Soviet founder Vladimir Lenin, who ultimately separated Ukraine from the imperial Russian empire.

“Ukraine is not just a neighboring country for us, Ukraine is a part of our cultural space,” Putin said, suggesting that the 1991 collapse of the Soviet Union caused Russia to be “robbed” of Ukraine. Now Ukraine is a “U.S. colony” with a “puppet regime” in charge, he said.

UK Prime Minister Boris Johnson, in response, said Putin’s declaration that he recognizes the two regions as independent is a breach of international law.

“Plainly what has happened is extremely bad news. … We will be talking to our allies urgently,” Johnson told reporters at a Feb. 21 news conference.

The European Union’s top diplomat, Josep Borrell, called on Moscow not to make the decision and argued that it could be a precursor for Russia to annex the Donetsk and Luhansk regions.

“If there is annexation, there will be sanctions, and if there is recognition, I will put the sanctions on the table and the ministers will decide,” Borrell said.

Hours before his announcement, Putin convened his Security Council to consider whether to approve requests by Russian-backed forces in Donetsk and Luhansk to recognize their sovereignty.

Dmitry Medvedev, the council’s deputy chairman, told the meeting it was “obvious” Ukraine didn’t need the two regions, and that a majority of Russians would support their independence. Russia already offers passports to residents of the two regions, and Medvedev said there were now 800,000 Russian citizens there.

Russia’s Duma passed the appeals from the leaders to Putin earlier this month.

At the time, U.S. Secretary of State Antony Blinken said Kremlin approval of the requests “would amount to the Russian government’s wholesale rejection of its commitments under the Minsk agreements, which outline the process for the full political, social, and economic reintegration of those parts of Ukraine’s Donbas region controlled by Russia-led forces and political proxies since 2014.”

U.S. officials have said for weeks that Russia was on the brink of or had already decided to invade Ukraine, but no invasion has thus far taken place.

Russian officials have said they don’t plan to invade Ukraine as Western officials have accused them of massing more than 100,000 troops near the border with their neighbor. Purported video footage shot near the Ukraine–Russia border areas have shown large columns of tanks, artillery, and troops in recent weeks.

“We have our legitimate right to have our troops where we want on Russian territory,” Anatoly Antonov, the Russian ambassador to the United States, said in a CBS News broadcast. “And I would like to say you that we are not a threaten [sic] to anybody.”

Ukrainian Foreign Minister Dmytro Kuleba on Feb. 21 wrote on Twitter that everyone should “calmly focus on de-escalation efforts” despite emotionally charged rhetoric.

Putin may meet with U.S. President Joe Biden after Blinken convenes with his counterpart on Feb. 24, according to the White House, but Russia has described it as “premature” to discuss the potential meeting.

U.S. officials say the meetings won’t be held if Russia invades Ukraine. Ukrainian officials, meanwhile, said they have to be involved in negotiations.

“No one can resolve our issue without us,” top security official Oleksiy Danilov told a briefing on Feb. 21.

In Washington, Biden summoned his top security advisers. Defense Secretary Lloyd Austin and Gen. Mark Milley, chairman of the U.S. Joint Chiefs of Staff, could be seen entering the White House on the President’s Day holiday, according to Reuters.