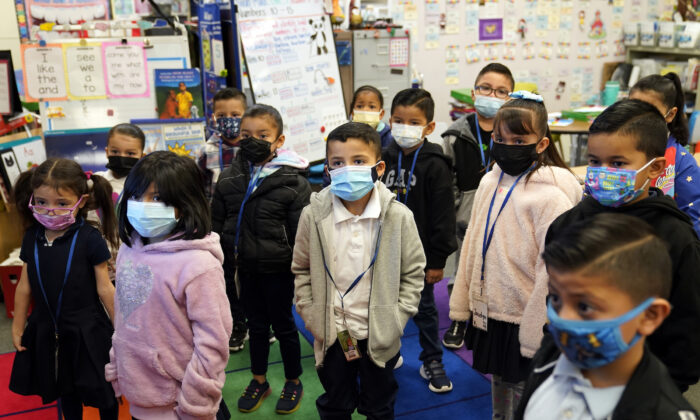 Kindergarteners wear masks while listening to their teacher amid the COVID-19 pandemic at Washington Elementary School in Lynwood, Calif., on Jan. 12, 2022. (Marcio Jose Sanchez/AP Photo)
By Katabella Roberts

Whistleblowers have alleged that the FBI conducted dozens of investigations into American parents who expressed opposition to schools’ COVID-19 mandates, and labeled them with a “threat tag,” House Judiciary Committee Republicans claimed in a letter on Wednesday.

Reps. Jim Jordan (R-Ohio) and Mike Johnson (R-La.) wrote in a letter to the Justice Department (pdf) that the “brave whistleblowers” from the FBI had informed them that the agency had reportedly created an internal threat tag called “EDUOFFICIALS” in October 2021 to track alleged threats against school boards, following an Oct. 4 directive from Attorney General Merrick Garland.

That directive came in response to a request from the National School Boards Association asking that the federal government use counterterrorism tools, including the Patriot Act, to target parents at school board meetings, the representatives wrote.

Such investigations allegedly involved parents who were “upset about mask mandates and state elected officials who publicly voiced opposition to vaccine mandates,” the lawmakers said.

“In sworn testimony before this Committee, you denied that the Department of Justice or its components were using counterterrorism statutes and resources to target parents at school board meetings,” the lawmakers wrote. “We now have evidence that [is] contrary to your testimony.”

“We have learned from brave whistleblowers that the FBI has opened investigations with the EDUOFFICIALS threat tag in almost every region of the country and relating to all types of educational settings. The information we have received shows how, as a direct result of your directive, federal law enforcement is using counterterrorism resources to investigate protected First Amendment activity.”

Citing a press release accompanying the October directive to assess such “threats,” Jordan and Johnson said it “highlighted the FBI’s National Threat Operations Center [NTOC] to serve as a snitch-line for tips about parents at school board meetings.”

The congressmen cited multiple examples of incidents in which someone reported a parent, including one case where an FBI field office interviewed a mom for allegedly telling a local school board “we are coming for you.”

That complaint, which came through to the FBI via NTOC, alleged that the mom was a threat because she belonged to a “right-wing mom’s group” known as “Moms for Liberty” and because she “is a gun owner,” they said.

According to its website, Moms for Liberty is a nonprofit organization standing up for parental rights at all levels of government.

When being interviewed by the FBI agent, the parent allegedly said she was upset with the school board’s mask mandates and that “her statement was a warning that her organization would seek to replace the school board with new members through the electoral process.”

Another example of such an investigation cited by the lawmakers involved a father who was opposed to masks.

Again, the complaint came through via NTOC and alleged that the dad “fit the profile of an insurrectionist” because he “rails against the government,” “believes all conspiracy theories,” and “has a lot of guns and threatens to use them,” they said. The complainant later admitted that they had no specific information of any crimes or threats.

In another instance, a Democratic Party official allegedly reported Republican elected officials in an unnamed state over claims that they “incited violence” because they publicly expressed displeasure with school districts’ vaccine mandates.

The FBI later determined that none of the cases were a threat and did not implicate federal criminal statutes.

However, Jordan and Johnson said that FBI agents had “exerted their limited time and resources investigating these complaints” and that such law-enforcement time and resources could have been diverted elsewhere on “real and pressing threats.”

“This whistleblower information is startling,” the congressmen wrote. “You have subjected these moms and dads to the opening of an FBI investigation about them, the establishment of an FBI case file that includes their political views, and the application of a ‘threat tag’ to their names as a direct result of their exercise of their fundamental constitutional right to speak and advocate for their children.”

The congressmen noted that “parents have an undisputed right to direct the upbringing and education of their children, which includes voicing their strong opposition to controversial curricula at local schools,” and said the whistleblower information raises “serious concerns” that Garland’s Oct. 4 memorandum will “chill protected First Amendment activity as parents will rightfully fear that their passionate advocacy for their children could result in a visit from federal law enforcement.”

They instructed the attorney general to present all of the documents and materials identified in their letter immediately and to take “reasonable steps” to preserve all “records responsive” to the matter.

Garland previously said during a Senate Judiciary Committee hearing in October 2021, that real and concrete threats of violence against school officials “are not protected by the First Amendment,” and that officials are “not investigating peaceful protests or parent involvement in school board meetings.”