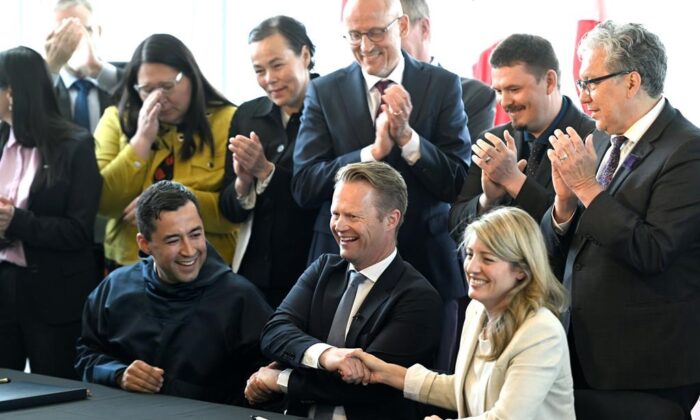 Prime Minister of Greenland Mute Bourup Egede, Minister for Foreign Affairs of the Kingdom of Denmark Jeppe Kofod, centre, and Canada’s Minister of Foreign Affairs Melanie Joly share a three-way handshake after signing an agreement that will establish a land border between Canada and the Kingdom of Denmark on Hans Island, an Arctic island between Nunavut and Greenland, in Ottawa, on June 14, 2022. (The Canadian Press/Justin Tang)
Canada

Foreign Affairs Minister Melanie Joly has struck a historic deal with Denmark, settling a dispute stretching back five decades over a 1.3-square-kilometre island in the Arctic.

The island has been the subject of fifty years of diplomatic disputes between the two nations, as it sits in the territorial waters of both.

Joly hailed the signing as a “historic day,” adding that it ended the “friendliest of all wars” which involved both nations leaving bottles of spirits on the island with little notes for one another while removing each other’s flags.

After the signing of the deal, the foreign ministers symbolically exchanged bottles of spirits, with notes attached, to end the “whisky war.”

Joly said the agreement means that Canada and Denmark could both plant their flags “of the same colour” on the “small but important island in the Arctic.”

She said the dispute had occupied 26 previous Canadian foreign ministers and its peaceful resolution showed that nations can resolve territorial differences in “a peaceful manner.”

In a pointed reference to Vladimir Putin’s invasion of Ukraine, Joly said the deal with Denmark had been struck “at a very important time in our history because we know that authoritarian leaders believe that they can … draw boundaries by force.”

In a further reference to Russia, she said by striking a deal “Canada and Denmark and Greenland are sending a clear message to other Arctic states” that disputes can be resolved through peaceful diplomacy.

The agreement over the sovereignty of Tartupaluk—the island’s Inuit name—followed consultation with Inuit people from both Nunavut and Greenland.

They will maintain hunting rights and freedom of movement on the island which has been part of their hunting grounds for centuries.

The deal, Joly confirmed, has also prompted further negotiations on freedom of movement for Inuit living in Greenland and Nunavut, to make it easier for them to visit friends and family.

The prime minister of Greenland, who also signed the deal, said the “boundary on Tartupaluk … will signal the beginning of a closer partnership and co-operation between us in areas of shared interest and of particular benefit to Inuit.”

“Inuit have long used Hans Island as a staging point for hunting,” she said. “We are pleased that the rights of Inuit have been protected so that they can maintain free movement and their traditional way of life.”

“We have discussed the sovereignty of Tartupaluk for more than 50 years. After intensified negotiations over the past few years, we have now reached a solution,” he said.

“Our efforts demonstrate our firm common commitment to resolve international disputes peacefully. I hope that our negotiation and the spirit of this agreement may inspire others.”

The deal means that Canada, for the first time, shares a land border with Denmark.

Asked if this could mean that Canada may now qualify to enter the Eurovision song contest, Joly joked that because Canada now has “a border” with the EU, Canada may apply to join the European singing competition.

The dispute over the small island has led to good-natured jostling since the 1980s between Canada and Denmark over which country rightfully owns it.

In 1984, Canada planted a flag on the island and left a bottle of Canadian whisky.

Later that year, Denmark’s minister of Greenland affairs visited by helicopter, planting a Danish flag. He also left a bottle of aquavit, a Danish spirit, at the base of the flagpole and is reported to have left a note saying “welcome to the Danish Island.”

In 1988, a Danish Arctic Ocean patrol ship arrived and built a cairn with a flagpole and Danish flag on the island.

Then in 2001, Canadian geologists mapping northern Ellesmere Island flew there by helicopter.

In 2005, defence minister Bill Graham went for a walk on Hans Island in a symbolic move. A week before he set foot there, Canadian Forces placed a Canadian flag and plaque on the island, prompting a protest from Denmark, which called in the Canadian ambassador.

Both countries then agreed to reopen negotiations about the island, with former Danish prime minister Anders Fogh Rasmussen saying it was “time to stop the flag war.”

The countries agreed to refer the dispute to the International Court of Justice in The Hague for resolution if they couldn’t reach a deal.

Northern Affairs Minister Dan Vandal said Canada and Denmark share a rich and co-operative history, and “it is fitting, and only a matter of time, that an equitable solution like this was reached, based on both practicality and compromise.”

The deal also resolved a disagreement between the two countries on maritime boundaries on the continental shelf.

Conservative foreign affairs critic Michael Chong said the deal was “a demonstration of how countries who are upstanding members of our international system can work together to settle disputes around international boundaries.”

“Few things are more sacrosanct in maintaining international order than ensuring that we respect each other’s international boundaries,” Chong said.

After the deal was signed, Joly presented her Danish counterpart with a bottle of Sortilege Prestige, a Canadian whisky and maple syrup liquor made in Quebec, while minister Kofod presented Joly with a bottle of Gammel Dansk Bitter Dram.