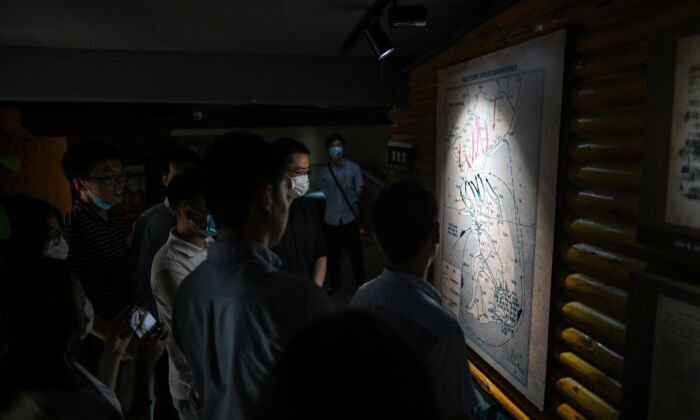 Xi, along with the other six members of the Chinese Communist Party’s (CCP) top decision-making body, the Politburo Standing Committee, and Chinese vice chair Wang Qishan visited an exhibition in Beijing commemorating the 70th anniversary of China’s participation in the Korean War.

A number of key officials also accompanied them, such as Chinese vice premier Liu He, and Chinese supreme court president Zhou Qiang.

State-run media Xinhua reported that Xi praised the CCP’s involvement to “safeguard peace and resist aggression,” and claimed that the Chinese army “won a great victory.”

The Chinese regime refers to the Korean War as the “War to Resist U.S. Aggression and Aid Korea.”

“The great spirit forged during the war… will encourage the Chinese people and the Chinese nation to overcome all difficulties and obstacles, as well as defeat all powerful enemies,” Xi said, according to Xinhua.

Xi did not specifically mention recent escalating tensions with the United States. But he said the regime’s current enemies would ultimately help it to achieve its goals.

The CCP’s version of history is that the United States supported South Korea’s invasion of North Korea, which then forced the Chinese regime to send its troops to assist North Korea.

In fact, the conflict ignited when Pyongyang forces suddenly attacked South Korea in June 1950. Weeks later, the United Nations joined the war on the side of South Korea, with soldiers from 21 countries.

The Chinese army then came to North Korea’s aid. The UN passed resolution 498 on Feb. 1, 1951 to urge the CCP to cease hostilities and withdraw from the peninsula, to no avail.

The war ended in a stalemate, with China and North Korea signing an armistice with the United States in July 1953.

In recent years, amid increased tensions with the United States, the CCP has heavily promoted the Korean War, such as periodically mandating all TV channels to air war-themed movies and TV programs, to foment anti-American sentiment among Chinese people.

It was the theme song of a famous 1956 anti-American propaganda film about the Korean War, titled, “Battle on Shangganling Mountain.”

San Francisco-based China affairs commentator Jiang Feng commented on his online talk show that the CCP likely made this move to create the impression that Taiwanese people want to be unified with the mainland and fight the United States together with China.

The United States supplies Taiwan with arms for its self-defense.

The song was the source of controversy back in January 2011, when Chinese pianist Lang Lang played the tune during a White House state dinner with U.S. President Obama and then-Chinese leader Hu Jintao.

The fact that Wang Qishan joined Xi on the trip was highlighted by overseas Chinese media. Wang was previously Xi’s right-hand man, assisting Xi in taking down many political enemies through carrying out an anti-corruption campaign.

But after Wang lost his key Party positions five years ago, relations between the two appear to have cooled. His current vice chair position is a mostly ceremonial role.

U.S.-based China political affairs commentator Zhong Yuan commented that Xi likely invited Wang “to show that he has no problems with Wang and other members of the Politburo Standing Committee.”

In the photos Xinhua released on Oct. 19 from the trip, Wang is looking away from Xi and facing the opposite direction from most other officials present—further fueling speculation that the two’s relationship has soured.