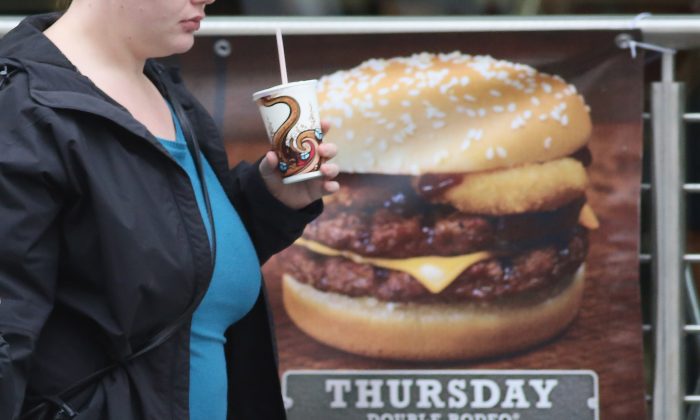 A woman passes an advertisement outside a fastfood outlet in Bristol, England, on Jan. 7, 2013. (Matt Cardy/Getty Images)
Opinion

If society is serious about curbing obesity, especially in children, then it must adopt policies that confront obesity rates, which are a growing public health concern, argues legal ethics scholar Deborah Rhode.

She notes that the United States has the world’s highest per capita obesity rate, and that over the last three decades the percentage of children who are obese has risen to 17 percent.

“A third of children are also overweight,” Rhode says. “The prevalence of obesity among adults has more than doubled; about a third of adults are obese and another third are overweight.”

In her analysis, she examines the track record of government intervention on obesity and evaluates a range of policy options such as caloric disclosure requirements, taxes, sugary drink bans, food stamp modifications, zoning regulations, marketing to children, physical education, litigation, and education.

“In principle, the United States is deeply committed to finding solutions to the rise of obesity and its health consequences. In practice, however, public policy has fallen short,” Rhode says.

Almost 80 percent of Americans consider adult obesity to be a major public health problem, she says, but many policy responses have proven controversial, especially in the courts at the federal, state, and local levels.

“At the same time that obesity rates have been rising sharply, many jurisdictions have resisted, or rolled back, strategies such as soda taxes or regulation of advertising directed at children,” Rhode writes.

Rhode says that the financial and political costs of anti-obesity policies are critical to consider. For example, simply suing people for misleading marketing may not be a solution. “From this perspective, litigation is a dubious investment, given the high price of lawsuits, their evidentiary difficulties, and the likelihood of political backlash.”

And though litigation can help raise public awareness and deter such marketing practices, it is unlikely to play a major role in obesity prevention, she says. Other blunt strategies such as bans on supersized soft drinks are easily evaded and politically unpopular.

By contrast, Rhode argues, strategies such as public education, greater access to parks, and physical education programs are less controversial and likely more effective. Public awareness is paramount, she says. One way to spotlight the obesity issue is through high-profile awareness campaigns subsidized through additional taxes on sugar-sweetened beverages.

These taxes, she says, can both raise revenue and deter the consumption of sugary products. Rhode says that polling data suggests these taxes are politically acceptable if citizens know that the funds raised are used for obesity prevention.

Two-Thirds of US Adults Are Overweight or Obese

5 Shocking Facts About Obesity in America

Another possibility is a creative use of zoning regulations, Rhode says. New zoning could restrict the location of fast-food restaurants near schools while encouraging the location of healthy food retailers in underserved neighborhoods.

She calls for additional rules on food and beverage packaging and marketing practices. For example, calorie disclosure requirements could be expanded to include more establishments. They could also use color-coding systems that are better noticed by people, especially children, she says.

“Restrictions on marketing unhealthy foods to children, through bans on toy promotions and school advertising, are cost-effective ways of changing the environment in which food choices are made,” Rhode writes.

‘We should act on what we know’

“Although we need more evaluation of policy strategies, we know enough about what works to chart a course of reform. We should act now on what we know,” Rhode says.

Fighting Childhood Obesity One Meal at a Time

In addition to physical problems such as heart disease and diabetes, obesity and being overweight are also associated with higher risks of psychological problems, including depression, anxiety, and low self-esteem. Stigmatization and prejudice are other problems, Rhode notes, as discrimination against overweight people is widespread in employment, education, and healthcare.

Rhode’s article appears in the Virginia Journal of Social Policy & the Law, Stanford University. Republished from Futurity.org under CC 4.0.