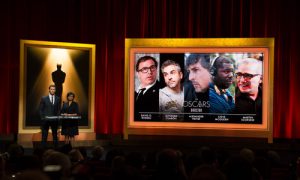 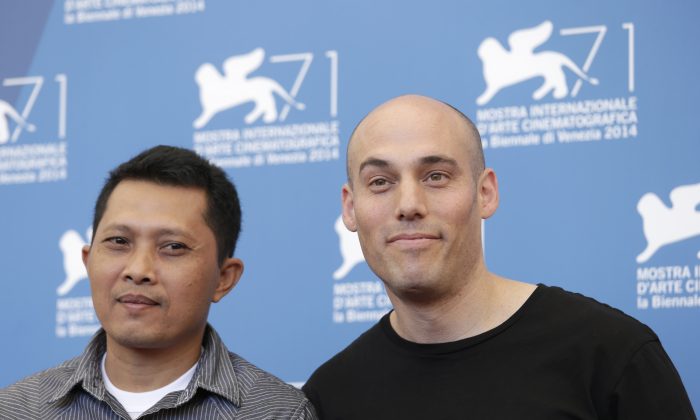 Actor Adi Rukun, left, and director Joshua Oppenheimer pose for photographers at the photo call for the film The Look of Silence the 71st edition of the Venice Film Festival in Venice, Italy, Thursday, Aug. 28, 2014. (AP Photo/David Azia)
Entertainment

When Your Neighbors Are Murderers

WASHINGTON—In Joshua Oppenheimer’s latest documentary, “The Look of Silence,” there is a scene when an elderly mother is asked, “How do you feel living surrounded by your son’s killers?” She answers that she hates them, but is powerless and fearful to say anything. Indeed, the murderers are feared and sometimes treated as heroes.

The movie, completed in 2014, is about the quest of her other son Adi Rukun, to learn how his brother Ramli Rukun was killed, and to confront the killers. (Indonesians traditionally have only one name. Adi’s last name Rukun is just his father’s first name. So, I will refer to the protagonist by his given name, Adi.)

“The Look of Silence” was shown at the U.S. Institute of Peace (USIP) on July 14 with Director Oppenheimer present to comment and answer questions. It has been released in area theaters beginning July 17. It premiered in 2014 at the prestigious Venice Film Festival where it won the Grand Jury Prize, according to Indiewire.com, which says it has acquired over 40 top documentary prizes around the world.

It is a companion to Oppenheimer’s “The Act of Killing (2012),” which in 2013 was nominated by the Academy Awards for Best Documentary. Both films probe into the slaughter of as many as a million people, regarded as communist sympathizers, during the purge in 1965-66 Indonesia when Major General Suharto sidelined President Sukarno.

The army leadership orchestrated the massacres but was careful to remain hidden and had most of the executions done by local death squads of the Komodo Aksi. A general interviewed who ordered some of the killings said they were “spontaneous.” When Adi is incredulous, the man says in a not-so-subtle threat, “Do the victims’ families want it to happen again?” He added, “It will happen again, sooner or later.”

Still more chilling is the commander, according to the Guardian, of a local branch of paramilitary group. He considers Adi’s questions, “subversive,” and asks him where he lives. Adi says, “I won’t tell you.” Unfazed, Adi next asks him, “If I came to you like this during the dictatorship, what would have happened?” The commander pauses, eyeing him carefully, and says, “You can’t imagine what would have happened.”

The credits shown in the film indicate many people who worked on it remain anonymous due to the danger. For safety reasons Adi with his family and mother have moved away from their village. Oppenheimer’s life is also in danger from the first film. He told the Guardian, “Since the film was shown in Indonesia, I have been receiving regular death threats from the paramilitary leader’s henchmen.”

‘Do the victims’ families want [the killings] to happen again?’
— 'The Look of Silence,' 2014 documentary

These films are not historical documentaries about the events in 1965. Oppenheimer said that they are really about Indonesia today, and “the coexistence of perpetrators and survivors.”

“The perpetrators are still in power, and people’s lives are being destroyed by fear,” Oppenheimer said.

Adi was born a couple of years after his brother Ramli was killed, and for that reason may not have been in as much fear as those who lived through the period.

Most everyone that lost a loved one in Adi’s community didn’t see the corpse. From the descriptions given by the killers, they mutilated the victims and pushed them into wells or the river. So, the relatives of each victim had some hope their loved ones would return. The death of Ramli was different. His death was known and his grave visible. It was for this reason that “Ramli’s death became synonymous with the whole genocide,” said Oppenheimer.

Three decades later in 1998, the military dictatorship formally ended. But to this day, 50 years after the massacres, the government has been loath to acknowledge this dark period, and usually prefers to bury the history. Some of the perpetrators have been made into celebrities and the government tries to justify what was done.

One way the government controls the narrative is by “history lessons” to Indonesian children who were born long after the violence. Such a teacher is shown teaching the government’s version of history to Adi’s son. He tells the youngsters that the people killed were communists and didn’t pray as Muslims do, who make up the bulk of the country. In the film Adi explains to his son that the teacher lied.

In the first film, which Oppenheimer devoted seven years to making, a leader of a death squad depicts in a gruesome fashion before Oppenheimer’s camera how he and the others went about killing their victims. He shows no remorse and takes delight in reenacting the killing. It’s a form of boasting, confident that he has impunity. He is not sure whether he did anything wrong. Some critics said the reenactments were grotesque and see no point in showing them.

However, they reveal the impunity enjoyed by the perpetrators.

Oppenheimer said not to mistake the boasting that is in both films as pride in their killing. He said that boasting and insecurity are two sides of the same coin and that they are not really proud of what they did. “The boasting, lies, fantasies, and stories they tell themselves [are] so that they can live with themselves,” he said.

The first film was unique in recording the killers’ version of what happened shown in their fantasies and reenactments of murder. The subject was about the killers rather than the survivors and victims.

“The Look of Silence” continues the story but is more conventional film making and so probably has wider appeal. Only a small part is devoted to reenactments of Adi’s brother’s murder by Amir Hasan and his accomplice Inong, who were local militia. Instead, it focuses on the trauma of the killing of one individual on one family. What is it like to live half a half century afraid?

As we get to know the family, we come to see them less as victims and more as human beings like ourselves, Oppenheimer told the Guardian.

We watch Adi, a friendly, calm, patient, but determined man, who is 44 when the documentary was filmed, seek out the perpetrators, using his profession as an optometrist to gain entry and their trust. As he goes about his eye examinations, asking whether a lens makes their sight better or worse, he slips in some other questions about their participation in the events of 1965-66.

Early in the film and the first image one sees in the trailer is of one of the killers of his brother (Inong) boasting that people are afraid of him. He tells Adi that he and others drank the blood of their victims to keep from going mad. The murderer, speaking behind the mask of the eye apparatus that optometrists use in eye examinations, has become an icon for the film.

Adi worked with Oppenheimer in the first film. He has two children and a wife, who disapproves of him endangering himself. If something happens, what about the children, she asked him.

The murderer, speaking behind the mask of the eye apparatus that optometrists use in eye examinations, has become an icon for the film.

It was Adi’s idea to make the film with him confronting the perpetrators. His hope was that if they see that he has not come in anger or seeking revenge, they will acknowledge that what they did was wrong and want to be forgiven by one of the families and make peace with their neighbors. As we see in the film, it doesn’t work out in the way Adi hoped.

Oppenheimer tried to tell him that they wouldn’t be remorseful, based on his five year experience with the main perpetrator in the “Act of Killing.” Although he is seen retching in the director’s cut version of the film, he still insists that his “conscience told him he had to do it,” said Oppenheimer.

When Adi proposed to Oppenheimer to confront the perpetrators, Oppenheimer said at the USIP that he told Adi, “Absolutely not. It’s too dangerous. There has never been a nonfiction film in history where the survivors confront perpetrators who still hold a monopoly of power.”

Adi told Oppenheimer that he didn’t want his children to inherit a prison of fear from his father and mother and from himself. Adi showed Oppenheimer some footage, later used in the film, he had taken that showed a sad, hopeless scene of his father, disoriented and afraid, unable to recognize his family members. Adi attributed the state of his father who died in 2013 to the psychological fear resulting from Ramli’s death.

Perhaps, if anyone sees the film, they will support truth and reconciliation.
— Joshua Oppenheimer, director, 'The Look of Silence'

Oppenheimer changed his mind, and with certain precautions agreed to make the film with Adi as the central character. He was persuaded too that they had little to fear from people who held regional power but not national power.

Oppenheimer said he hopes the film shows how the fabric of society is torn, and “the fear and guilt that condemns Indonesians to raise their children in a kind of prison.”

“Perhaps, if anyone sees the film, they will support truth and reconciliation, and some form of social justice,” he said.