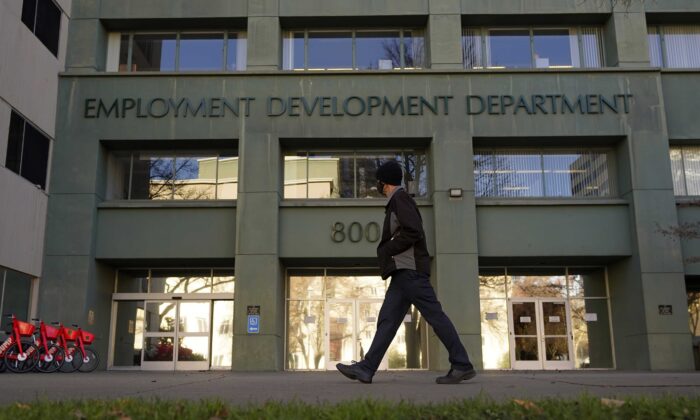 A person walks past the office of the California Employment Development Department in Sacramento, Calif., on Dec. 18, 2020. (Rich Pedroncelli/AP Photo)
Opinion

In an era of inflation, strikes are everywhere, and workers are suffering. Had their wages kept pace with inflation, they would not be grumbling about wanting to be treated better. Academics say wage-price exhibits a spiral, meaning that they reinforce each other. So, why is it that wage growth always seems to be slower than that of prices (inflation)?

Explaining this involves two concepts. One is profit maximization under the market mechanism, so the selling price is set according to market demand. The other is the costs of production, of which labor is just a part.

Profit maximization says firms are maximizing revenue minus costs, the former is the price times output (quantity) whereas the latter includes a few components, with one of them being labor cost or wage times labor employed. At the margin (that is, under the first-order condition by doing a bit of basic calculus), the marginal product of labor (MPL) equals the real wage or wage per price level. Using the other concept, the production function prescribes output made by factors including labor. At the margin again, MPL equals labor share times output per labor.

Under normal circumstances such as a Cobb-Douglas production function, output per labor can be expressed in terms of capital-to-labor ratio. Equating the two MPLs from profits maximization and production function, one would arrive at real wage being proportional to capital-to-labor ratio to the power of capital share. This is important since the dynamic version of this says “real wage growth is proportional to capital growth in excess of labor.” In other words, for wage growth to be faster than inflation capital growth has to be faster than labor cost.

When labor is in short supply relative to capital, high wage growth will drive up labor demand at the onset and so capital will grow slower than labor soon afterwards. This means wages will grow more slowly than inflation according to this relationship.

This usually happens when inflation rises from low levels to high levels. The accompanying chart scatter plots the weekly earnings growth against the overall CPI inflation, monthly from 1965. One can vaguely identify a proportional relationship that is not necessarily linear, although it may not be quadratic (parabolic) either as shown by the fit in the chart. For inflation above eight percent, the earnings growth spans from six percent to ten percent. Should the slowdown case happen, it emerges when inflation is above seven percent, as is shown from the intersection crossing the 45-degree line.

The reason behind this might be due to the phase difference between capital and labor change. Capital growth is by definition investment, which usually goes before labor growth in a cycle.

When the business cycle turns from boom to bust, capital growth shrinks earlier than labor growth, and this often happens when the previously lagging inflation is rising. Thus, when inflation is high or near the brink of recession, capital grows slower than labor, and earnings grow slower than prices. This explains why strikes often begin to happen toward the end of a boom cycle.

Reality will soon confirm this.