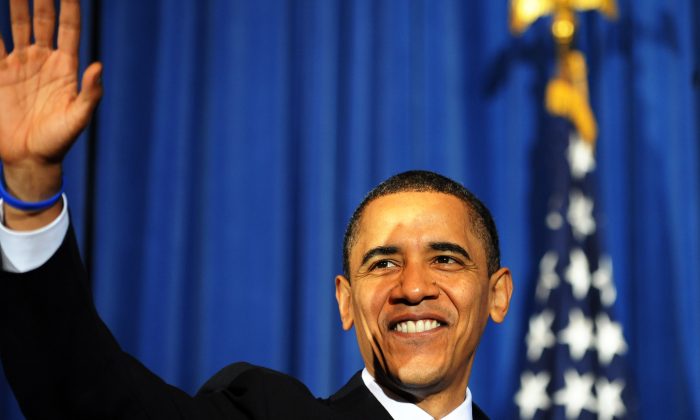 Former U.S. President Barack Obama waves at the audience members during a rally celebrating the passage and signing into law of the Patient Protection and Affordable Care Act health insurance reform bill at the Interior Department in Washington on March 23, 2010.(JEWEL SAMAD/AFP/Getty Images)
Viewpoints

After I wondered aloud on CNN whether, as president, Barack Obama would “lead the country in a socialist direction” (and was instantly accused of “Red-baiting” by the next panelist), I never again resumed regular appearances on Lou Dobbs’s show, and my contract was not renewed.

More importantly, the broader discussion of presidential candidate Obama’s “socialist” politics did not take place before the 2008 election.

Even National Review’s Stanley Kurtz, with his ground-breaking reportage about Obama’s far-left political career, at that time danced around directly calling Obama or his New Party affiliation “socialist.” Kurtz then argued that what was important here was not the label, but rather the fact that Obama and the New Party were clearly far to the left of mainstream liberalism.

I disagree. The label, the clarity, is always of paramount importance. Of course, with Charles Krauthammer at Fox summarily disposing of the label that set off the cry of “Red-baiting” at CNN, little wonder mum remained the word.

I much appreciated the counsel of a British writer named Adam Shaw. Describing the wide range of socialists, so labeled, in British and European politics, and commenting on the contortions of the American media, particularly conservatives in the media, to avoid the “obvious fact [that] President Obama is quite clearly a socialist,” he tried to shine a little wisdom across the water: “To call someone a socialist is not conspiratorial, and it is not fear-mongering; it is simply the truth, and it is time for some in the conservative media to take a deep breath and admit it—America has a socialist leading the country. Welcome to the club: It stinks!”

Of course, I would argue that the use of the term “Alinskyite,” in reference to community organizer Saul Alinsky, is itself a shot of fog. All of these weapons of semantic confusion from the “vaporous arsenal” go straight back, past Alinsky, to Lenin and Marx.

From The New York Times, March 7, 2009, I present Exhibit A: “Obama has always sought to avoid being defined by labels, presenting himself as open to ideas from the left and the right. … Asked to describe his philosophy in a word, he said, ‘No, I’m not going to engage in that.’”

Of course not. “Engaging” might have burned off the fog, which, in this same story, Obama actually tried to sink more deeply into. On Air Force One earlier in the day, the Times reporter asked the new president whether his domestic policies could be described as socialist: “’The answer would be no,’ he said, laughing for a moment … As the interview progressed, Mr. Obama never returned to the question.”

About 90 minutes after the plane landed, though, he called the reporter from the Oval Office and said he had been thinking about it. “It was hard for me to believe you were entirely serious about that socialist question,” the president said.

Notice the implication of ridicule, the suggestion that such a question was so unworthy it could be a punch line.

He then dismissed the criticism, saying that large-scale government intervention in the markets and the expansion of social welfare programs had begun under his Republican predecessor, George W. Bush.

(As Krauthammer told us, large-scale government was part of “Eisenhower’s America.”)

“It wasn’t under me that we started buying a bunch of shares of banks,” Obama said. “And it wasn’t on my watch that we passed a massive new entitlement, the prescription drug plan, without a source of funding.”

He added, “We’ve actually been operating in a way that has been entirely consistent with free-market principles, and some of the same folks who are throwing the word socialist around can’t say the same.”

Aside from that parting whopper about his own administration operating on “free-market principles,” Obama never spoke truer words.

Bush did indeed ramp up the socialization of the U.S. economy with colossal government bailouts in the banking, auto, and insurance industries. Further, the Bush administration’s intervention into the home loan industry capped one of the great, bipartisan social engineering disasters of all time.

Bush’s reputation as a conservative, however, seems secure—if only, as political commentator Jonah Goldberg has noted, as a foil for the left and, I would add, a talisman of the right, a lucky charm to rub for reassurance and corroboration.

The thinking goes: Since I’m a conservative and supported Bush, Bush must be a conservative, too. Or, since Obama’s planned tax increases are more modest than Eisenhower’s, Obama must not be a socialist. Call it innocence—conservatism—by association.

Obama’s socialism did become a topic on conservative talk radio, notably driven by Mark Levin, while Glenn Beck on Fox News explored what amounts to a century-old “progressive” assault on the nation’s founding principles. Such antisocialist rhetoric reached a crescendo during the Obamacare debate, which probably explains why Obama himself entered the fray.

During a televised January 2010 meeting with House Republicans, out of the blue, he made the following point: “The component parts of this thing [Obamacare] are pretty similar to what Howard Baker, Bob Dole, and Tom Daschle proposed at the beginning of this debate last year. Now, you may not agree with Bob Dole and Howard Baker, and, certainly, you don’t agree with Tom Daschle on much, but that’s not a radical bunch.”

Another declaration of innocence by association. Then he said this: “But if you were to listen to the debate and, frankly, how some of you went after this bill, you’d think that this thing was some Bolshevik plot.”

Here we see an epic act of self-vaccination, a public declaration designed to ward off any political harm caused by mounting discussion of whether nationalized health care deserves to be called socialist or Marxist. (Yes.) We never heard the term “Bolshevik” invoked during the health care debate, but I think the president chose the label for being the most antique and, to the 21st-century ear, most outlandish, and thus the most likely to cue reflexive laughter.

To wit, a smattering of applause arose from the Republican ranks at the mention of “Bolshevik plot,” as though some Republicans actually believed Obama had delivered a witty zinger. On the contrary, the president had put them on notice as to what was politically incorrect and thus diss-able, which is quite different.

Suggesting that nationalized health care had “Bolshevik” origins was ridiculous, he was saying, while arguing that it was a “plot” was crazy. Further, such talk was only one step away from conspiracy theory (total looney tunes! Bolshevik plot? Bob Dole? Are you crazy? Yuk, yuk, yuk.).

Would that some Republican, any Republican, had replied: “Not necessarily a ‘plot,’ sir, but a program that is indeed ‘Bolshevik’ in conception, design, and purpose nonetheless. Government control of private sector activity, as the American people well know, is aptly described as Bolshevik—or Marxist, socialist, collectivist, statist, and, for that matter, fascist, too. Indeed, nationalized health care was one of the first programs enacted by the Bolsheviks after they seized power in 1917. (Banks, insurance companies, and means of communications were also taken over by Soviet authorities immediately.)

“Further, it is worth noting that one of the most prominent early champions of nationalized health insurance and socialized medicine in this country, Henry Sigerist, was a notorious apologist for Stalin, including his state-engineered famine in Ukraine. According to historian John F. Hutchinson, Sigerist ‘shared with the architects of Soviet health policy under Stalin an outlook best described as medical totalitarianism. He really believed that humanity would be better off if every individual were under the medical supervision of the state from the cradle to the grave. … Sigerist’s belief in the necessity for state control over all aspects of medicine ultimately made him an apologist for state control over most aspects of human life.’”

It’s always no. Such rejoinders, such logical deductions from the conservative side, the side left to defend the republic as founded, come few and far between. At almost every challenge, the bastions of tradition run up a white flag. It’s almost as if they’ve been neutralized, neutered even, as though there was nothing left on the inside.

Could it be that emptiness, a reluctance to stand on and defend tradition and its institutions, a shaky hold on principle, a failure to draw conclusions and make judgments, are the real legacy of the “American Century?”

If so, who really won all of those wars?