When the ‘S-Word’ Was Taboo 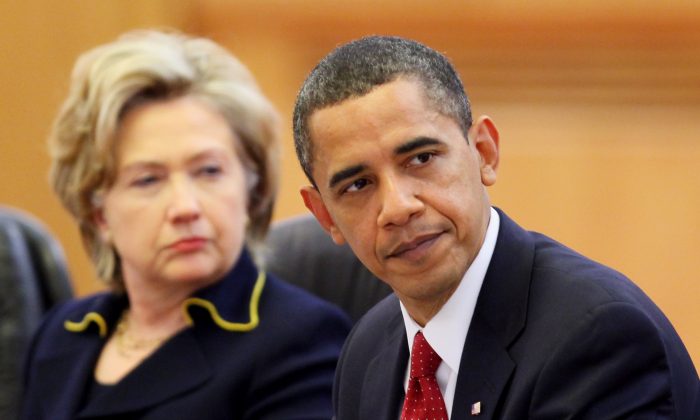 Then-President Barack Obama and then-Secretary of State Hillary Clinton during a meeting in Beijing on Nov. 17, 2009. (Feng Li/Getty Images)

Once upon a short time ago, no one would say the S-word: “socialist.” I know. I was there.

It was a few weeks before the 2008 presidential election, when, during a televised campaign stop in Ohio, candidate Barack Obama broadcast his belief in economic redistribution to “Joe the Plumber.”

“I think when you spread the wealth around, it’s good for everybody,” Obama said. Abruptly, the “post-partisan” mask Obama wore throughout the campaign had slipped. Did it reveal the Marxist underneath? Did this would-be emperor wear anti-democratic clothes?

To anyone paying attention, the answers (yes and yes) were already obvious. We knew from Hank de Zutter, for example, writing in the Chicago Reader in 1995, on the eve of Obama’s first election (he won an Illinois state Senate seat in 1996), Obama articulated his collectivist ideology:

“In America, we have this strong bias toward individual action. You know, we idolize the John Wayne hero who comes in to correct things with both guns blazing. But individual actions, individual dreams, are not sufficient. We must unite in collective action, build collective institutions and organizations,” Obama said.

We knew from Trevor Loudon’s New Zeal blog that Obama ran his first political race as a “fusion” candidate of the Democratic Party and the socialist New Party. We knew from an unearthed 2001 radio interview uploaded to YouTube that Obama bemoaned constitutional restraints on state powers, and the fact that the Civil Rights-era Warren court “never ventured into the issues of redistribution of wealth.” In that same interview, Obama plugged “community organizing activities on the ground” that create “coalitions of power through which you bring about redistributive change.”

That’s right. Not “hope and change,” but “redistributive change.”

Obama couldn’t have been clearer about his revolutionary intentions to replace what he denigrated as the old “right-wing,” “individualistic bootstrap myth” with a collectivist order, but not even his Republican opponent, John McCain, cared to address it. Media on the left and right alike let these choice scoops lie, flopping on the internet, denying them the mainstream oxygen that would have turned them into living, breathing campaign issues.

It should never be forgotten that following Obama’s exchange with “Joe the Plumber,” our free press decided that what U.S. voters really needed to know was not whether the next president was a socialist, but whether Joe Wurzelbacher was a licensed plumber.

Conservative pundits were silent, too.

On Oct. 23, 2008, less than two weeks before Election Day, Fox News’s Special Report with Brit Hume took up the issue with Mara Liasson, Fred Barnes, and the late Charles Krauthammer.

The conversation kicked off promisingly enough with a question from Hume about whether Obama’s recent comments “raised legitimate questions about whether he has a socialist or socialistic policy.” The inquiry dead-ended when it got to Krauthammer. “Since the word ‘socialism’ has reared its ugly head,” he began, “let’s dispose of it.”

On the contrary, Krauthammer explained why socialism was not an issue. His reasoning? Socialism just isn’t socialism, he said, unless the government owns the means of production.

So, presumably, because Obama didn’t also tell Joe that, as president, he would take over two of the three largest U.S. automakers—General Motors, Ford, and Fiat Chrysler—one-sixth of the economy (health care), and much of the student-loan and home-mortgage industries, there was no reason to wonder what type or even whether a socialist was about to be elected president.

A sound bite is sometimes just a sound bite, but this one still reverberates. In pairing these late-breaking glimpses of Obama’s redistributionist beliefs with “Eisenhower’s America,” Krauthammer invoked a worn Rorschach prompt for plain vanilla conservatism, which could hardly be more inaccurate.

Eisenhower may have been elected on a solemn pledge to roll back the New Deal and war-inflated spending and taxes, but he did neither. That doesn’t change Ike’s chiseled-in-stone reputation for “conservative” stability, however. By referencing Eisenhower’s America, Krauthammer was promoting a sense of politics as usual.

During that same October 2008, I remember thinking extra-long and hard before one of my regular CNN appearances on the political roundtable of the old Lou Dobbs show about whether to use the word “socialist” on the air (I’d already used it in my syndicated newspaper column). While waiting for the camera to roll, I remember triple-checking already double-checked facts, re-evaluating the evidence, almost as though I didn’t trust myself. If no one else was talking about it, could it be true? If no one else was bringing it up, did it matter?

Such questions seemed unavoidable in the silence of a sound booth. What I was responding to was the force of taboo—the pressure of silence all around. No one in the mainstream media, liberal or conservative, wanted to talk about Obama’s socialist politics. I am happy to report that I broke the media juju and asked on CNN whether as president “Obama will lead the country in a socialist direction.” The next guest promptly accused me of “Red-baiting.”

While I got to respond, I never resumed regular appearances on the Dobbs show, and my contract wasn’t renewed.

But that’s just a coincidence, comrade.

Diana West
contributor
Diana West is an award-winning journalist and author whose latest book is "The Red Thread: A Search for Ideological Drivers Inside the Anti-Trump Conspiracy."