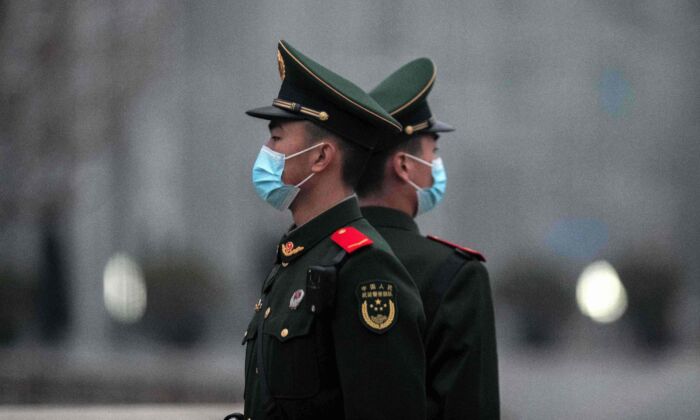 When Overt Signals of Aggression Become Noise: China’s Warnings of Its Belligerence Must Be Heeded

Aggressive statements from the Chinese regime are not new but have become more vocal since President Joe Biden took office.

First, the messages sent between the United States and China are largely a dialogue of the deaf. Second, the Chinese regime is becoming increasingly belligerent and openly broadcasting its aggressive intentions.

In his remarks, Austin echoed Japanese Prime Minister Fumio Kishida at the same gathering when he called for “a free and open order based on the rule of law, not might.” Austin also noted that the policy of the United States on Taiwan and the Taiwan Strait has not changed, and it is Beijing that is forcing change and is increasingly coercive. Austin also warned of the Chinese regime’s increasingly unprofessional and aggressive interceptions of aircraft and ships in international airspace and waters.

Chinese Defense Minister Wei Fenghe gave his address a day after Austin and repeatedly expressed Beijing’s willingness to fight should Taiwan declare independence or interfere in China’s affairs. This is in keeping with the message conveyed by Chinese officials of a willingness to use aggression, including by Chinese military officials in recent months who have cautioned the Biden administration that the Taiwan Strait is not international waters. This represents a major change in the status quo.

Wohlstetter and the Legacy of Pearl Harbor

In 1962, Roberta Wohlstetter published her book “Pearl Harbor: Warning and Decision.” Her major argument was that the United States was surprised by the Japanese surprise attack on Dec. 7, 1941, but, in fact, it should not have been.

For Wohlstetter, writing during the Cold War, the intelligence community and national security decision-makers must be attentive to the signals and ensure they are not lost in the noise. The creation of the Central Intelligence Agency in 1947 and related reforms in the Cold War were intended to ensure centralization and coordination so that signals would never again get lost in the noise. The 9/11 terrorist attacks generated another wave of reform and centralization to address the seams revealed by those surprise attacks.

US Decision-Makers Received Many Signals

In the wake of the Austin-Wei and Sullivan-Yang meetings, it is useful to review some of the major incidents.

In 2021, the first meeting between U.S. Secretary of State Antony Blinken and Sullivan and their Chinese counterparts Wang Yi and Yang in Anchorage, Alaska, was perilous for what occurred, including the insult to the United States made by the Chinese officials, but also for the precedent set by U.S. behavior. The Chinese officials launched a verbal assault against the United States on racial relations and the condition of democracy in America.

Washington must not fall for Beijing’s diplomacy trap. It must see clearly China’s intent in these dialogues and question whether the United States needs to engage the Chinese officials in such fora.

Additionally, on July 1, 2021, in an address commemorating the Chinese Communist Party’s (CCP) centennial, Xi Jinping’s hostility was again fully expressed when he warned the United States and other democracies that the Chinese people would never allow any foreign forces to bully, oppress, or enslave China. He proclaimed, “Anyone who dares try to do that will have their heads bashed bloody against a great wall of steel forged by over 1.4 billion Chinese people.”

Xi also announced that the Chinese regime achieved its first centenary goal and is moving closer to the second. Most Westerners likely do not understand Xi’s meaning. The Chinese regime employs the phrase “have their heads bashed bloody” to mean thoroughly defeating or annihilating the enemy. Notable as well in this speech was that Xi also vowed to complete the “great cause of motherland’s unification,” a euphemism for seizing Taiwan.

Act on the Signals China Has Sent

In many respects, the problem that the United States faces is the reverse of the one before the attack on Pearl Harbor. While the Japanese were furtive and sought to mask completely their preparations for attack—Tokyo did everything to minimize the signals Washington might receive—China is broadcasting them.

There are too many signals of aggression from the CCP. It has become a form of noise Wohlstetter would not conceive. Yet she would recognize that the result is the same. U.S. decision-makers ignore them. The stark fact of life in international politics today is that the Sino-American relationship is broken because the CCP declared war in all but name by choosing to target and supplant the United States. The relationship is beyond repair and will only get worse as Beijing and Washington increasingly battle ever more sharply.

Wohlstetter would recognize the problem and would no doubt be—in equal measure—flummoxed and saddened that despite the expansion of the national security community, Washington cannot identify an overt threat. Even one that proclaims that it is.