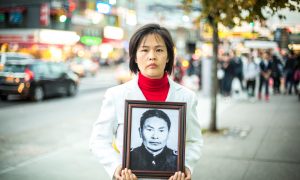 Seeking Justice in a Lawless China
0 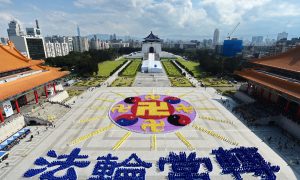 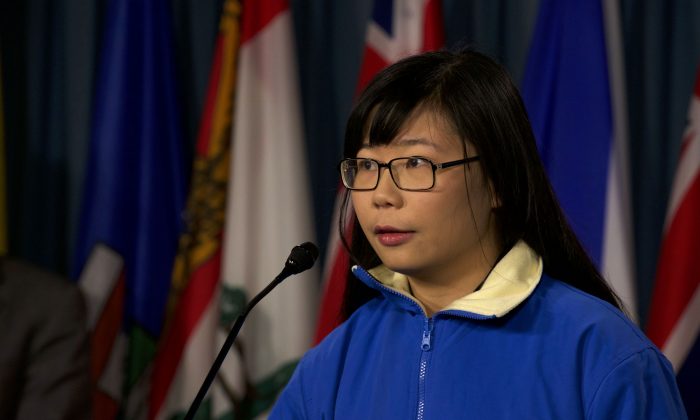 Hope Chen speaks to reporters on Parliament Hill on Dec. 9. The 22-year-old is trying to draw attention to the plight of her father who was imprisoned in China for suing former Chinese leader Jiang Zemin. Chen has been threatened by a Chinese agent for discussing his detention in the media. (Matthew Little/Epoch Times)
Canada

One of the people who kidnapped Hope Chen’s father in China warned the 22-year-old woman on Dec. 8 that she would never see him again if she didn’t watch herself.

The following day, Chen recounted the story to reporters in the press theatre on Parliament Hill. Outside, 700 people gathered for a rally and MPs came one after another to lend their support to people like her—people losing loved ones in China or being threatened in Canada.

Chen, like her father, practices Falun Gong, a Chinese qigong practice of meditation, slow-moving exercises, and a moral philosophy centred on the tenets of truthfulness, compassion, and tolerance.

Basically they’re threatening that if I associate myself with Falun Gong, they will never let me see my dad again.
— Hope Chen

Within days, then-Chinese leader Jiang Zemin began planning a massive crackdown. It was officially launched on July 20 of that year and resulted in hundreds of thousands being arrested and thousands killed. Estimates of the number of deaths vary widely due to the hundreds of thousands of Falun Gong practitioners who have disappeared into the Chinese judicial system.

Amidst a persecution of their practice, Falun Gong practitioners have set up underground printing presses to counter state propaganda and regularly hand out or mail literature to Chinese citizens. Outside China, they have created some of the most effective anti-censorship software so that Chinese people can get around the Chinese firewall.

Now they are taking advantage of changes to the legal system made by current leader Xi Jinping, and have filed 200,000 lawsuits against Jiang Zemin.

Chen’s father, Chen Yongbo, is one of them.

Chen’s dad was first taken from her in 2000 for nearly three months when she was 6 years old. He was beaten, tortured, and injected with mind-altering drugs in an effort to “re-educate” him and force him to renounce Falun Gong.

“I remember crying myself to sleep at night, hoping that a miracle would happen and my dad would come back to me. But whatever injustice he faced, he didn’t stop being a compassionate, tolerant person, and he did not give up the right to seek truth and justice,” she says.

This year, Chen Yongbo joined the wave of Chinese citizens filing lawsuits against Jiang for launching the persecution of Falun Gong. On Nov. 11 he was abducted from his workplace and taken to a brainwashing centre in Wuhan city.

On Dec. 8, Chen tried to call her father. Instead, she ended up speaking with a woman named Xu Jun at the 610 Office, an extrajudicial agency that carries out the grim work of targeting and jailing Chinese dissidents. It was launched specifically to stamp out Falun Gong but has since expanded to other activities.

Chen’s voice trembled slightly as she talked about her phone call with Xu, who had read a newspaper article about Chen’s efforts to raise her father’s plight and secure his release.

“She threatened me to not be associated with Falun Gong practitioners anymore.”

Chen said she was told that if she did not disassociate from Falun Gong she would never be given a visa to enter China again.

“Then she’s saying they will not issue a visa to my dad. Basically they’re threatening that if I associate myself with Falun Gong, they will never let me see my dad again.”

At the rally on Parliament Hill, Chen was joined by two men who have sat in cabinet for their respective parties—Irwin Cotler, as the Attorney General for Paul Martin’s Liberal government, and Peter Kent, one of Stephen Harper’s environment ministers.

She was also joined by Paul Li, a Canadian citizen who was arrested while visiting his father in China in April and then deported after being detained for four days. His dad, Xiaobo Li, was sentenced to eight years in prison. His crime was exposing the arrest and torture of other Falun Gong practitioners through writing articles and handing out information about a pirate radio show.

Unlike many dissident movements in China, Falun Gong has continued to challenge the Beijing regime.

For the younger Li, the presence of people like Cotler and Kent, as well as other MPs who showed up to the rally, meant so much. (Judy Sgro, one of the Liberal MPs who spoke at the rally, revealed that Prime Minister Justin Trudeau raised the plight of Falun Gong practitioners with Chinese leader Xi Jinping in a recent meeting.)

“For a long time in the past year, I felt sad and sometimes helpless about what happened to my father. But as time passes I feel encouraged by the actions taken by my father and Falun Gong practitioners, and support from the Canadian government,” says Chen.

“Although my father is persecuted in prison for his belief, his actions are righteous.”