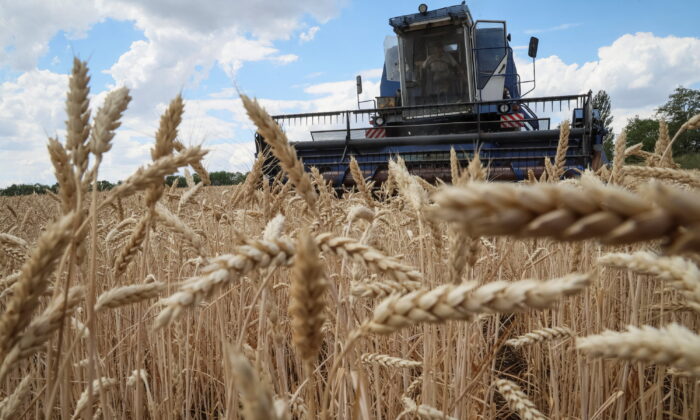 Corn futures rose by as much as 2.8 percent on July 25 before the gain eased to 1.4 percent, while soybeans were up by just 0.3 percent.

Wheat prices dropped by almost 6 percent on July 22 after Russia and Ukraine, both of whom are major exporters of grains, reached a deal to allow crucial grain shipments to safely leave three Ukrainian Black Sea ports: Odesa, Pivdennyi, and Chornomorsk.

That level of prices haven’t been seen since before Russian President Vladimir Putin launched his “special military operation” in neighboring Ukraine in February.

The agreement was brokered by Turkey and hailed as a vital step toward helping to avert a global food crisis.

Representatives of Turkey, as well as Ukraine and Russia, met in Istanbul on July 22 to sign the deal, along with United Nations Secretary-General António Guterres.

Turkish President Recep Tayyip Erdogan said of the deal on July 22: “We are proud of being instrumental in an initiative that will play a major role in the solution of the global food crisis that has occupied the whole world for a long time.”

The president also said the deal would “contribute to preventing the danger of hunger that awaits billions of people in the world.”

However, Russia said on July 25 that its cruise missiles had struck military infrastructure in Ukraine’s Odesa port over the weekend, shortly after the agreement was signed.

The “favorite address” was a reference to Ukrainian forces on Snake Island in the Black Sea who reportedly told a Russian ship to “go [explicit]” itself before a Russian strike in February.

Serhii Bratchuk, a spokesman for the Odesa military administration, said on Telegram that Kalibr-type cruise missiles hit the infrastructure of the port and that two were shot down by Ukraine’s air defense forces.

Natalia Humeniuk, a spokeswoman for the Ukrainian military’s southern command, said on TV that the missiles didn’t hit grain storage at Odesa’s port.

An estimated 20 million metric tons of grain have been held up in the port of Odesa in southwestern Ukraine, according to the BBC.

Wheat futures rose by 70 percent to a record high of $12.94 per bushel in the two weeks after the invasion began, prompting concerns that the conflict could impact global supplies, worsen food insecurity, and drive prices up further.

The EU’s high representative for foreign affairs, Josep Borrell, said on July 23 that the bloc “strongly condemns” the attack.

He wrote on Twitter, “Striking a target crucial for grain export a day after the signature of Istanbul agreements is particularly reprehensible & again demonstrates Russia’s total disregard for international law & commitments.”