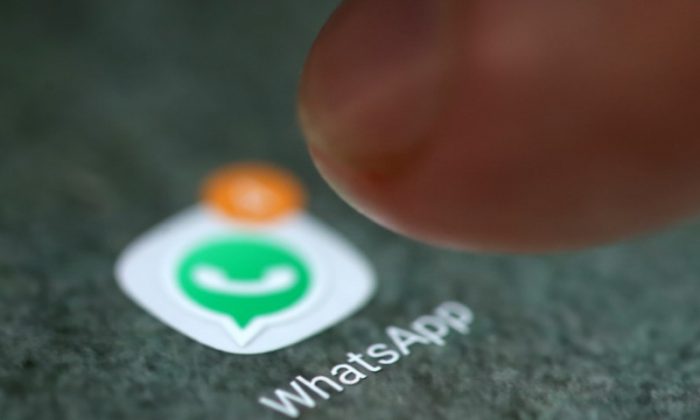 The WhatsApp app logo is seen on a smartphone in this picture illustration taken September 15, 2017. (Reuters/Dado Ruvic/Illustration)
Social Media

MUMBAI/BENGALURU—Facebook Inc’s WhatsApp is rolling out a global test measure to rein in messages forwarded by users, the messaging app said, after the spread of rumors led to several killings in India and sparked calls for action from authorities.

False messages about child abductors on WhatsApp have led to mass beatings this year of more than a dozen people in India, some of whom have died.

“We believe that these changes – which we’ll continue to evaluate – will help keep WhatsApp the way it was designed to be: a private messaging app,” WhatsApp said in a blog post on Thursday, announcing its worldwide test of limits on forwards.

WhatsApp did not say what the limit on forwarded messages would be elsewhere, but in India specifically, they will be limited to five chats at a time, whether among individuals or groups. Also in India, WhatsApp will remove the quick forward button placed next to media messages.

Both moves are designed to deter mass forwards in India, a country that WhatsApp says forwards more messages, photographs and videos than any other.

The latest changes were welcomed by technology experts.

“This change is going to make it difficult for people to forward messages, it’s going to add a layer of friction to the process,” said Nikhil Pahwa, a co-founder of advocacy group Internet Freedom Foundation.

WhatsApp will also meet non-government bodies and other groups in New Delhi, the capital, on Friday to discuss ways to curb the spread of false messages, said one source at the company, who asked not to be named, invoking company policy.

India’s technology ministry, which had already this month demanded that WhatsApp rein in misuse, said in a statement late on Thursday that it wanted more effective measures to ensure accountability and ease law enforcement.

“When rumors and fake news get propagated by mischief mongers, the medium used for such propagation cannot evade responsibility and accountability,” it said. “If they remain mute spectators they are liable to be treated as abettors and thereafter face consequent legal action.”

WhatsApp has been told the issue is very serious and “deserves a more sensitive response,” it added.

Responding to the ministry’s earlier call, WhatsApp had rolled out a new feature to label forwarded messages and alert recipients that the sender had not created the message.

In its first such effort to combat the flurry of fake messages, the firm took out advertisements last week in key Indian newspapers aiming to dispel misinformation.

But it has also said a partnership with the government and society is required to curb the spread of false information.

Last weekend police arrested more than 48 people they said were part of a mob that killed a tech industry worker in southern India over suspicions that he and a group of friends were child abductors.