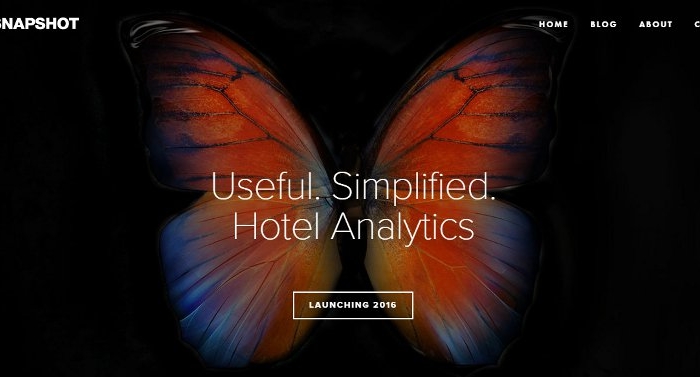 The SnapShot Travel landing page, now a signup for hotels for 2016
News

What’s the Future of Big Data in Hospitality?

The trend in digital business is keyed on so-called “BIG DATA”, but as yet no tech player has capitalized massively. Even SnapShot, which is led by some of the industry’s “best and brightest” has only partially cracked leveraging massive hotel data so that hoteliers can glean intelligence that can matter. The company’s initial data analysis engine provided hotels with stand alone business intelligence via a grid-like interface, a unique kind of platform for data aggregation. Effective as this is, however, not every hotelier is a power analytics user, so assimilation became the rub for many potential clients. SnapShot’s further expansion then depended on fabricating simplicity and condensed power.

Enter Shiji Networks, China’s hospitality SaaS and IT powerhouse. With over 6,000 satisfied hotels under its wings, the company begun in 1995 by now billionaire Li Zhongchu is known for being the biggest system service provider and system developer in the hotel space. However, it’s Shiji’s integration capabilities that is the focus of this SnapShot deal. This and worldwide expansion, for servicing every hotel in China is a zero growth potential for the company.

With a marque product like the slimline and “fits all” SnapShot is announcing Li Zhongchu’s firm can serve many thousands more hotels. This is, as they say, not rocket science. Shiji already services Grand Hyatt, Sheraton, Hilton, Shangri-la, Marriott, Peninsula and Accor in China, so expanding into Europe, and North and South America seems a fairly logical transition. This is especially true if SnapShot forges a “one size fits all” demand management smart tool in the coming months. Add to this synergy to last year’s Alibaba $459 million buy into Shiji, and the ramifications are fairly obvious.

One potential that lends itself to rapid expansion of the SnapShot-Shiji-Alibaba meld is Alibaba’s Taobao Travel site, where travelers can book air and train tickets, hotels and vacations online or by mobile with support from Shiji and its hotel network. Yesterday’s announcement further characterizes a larger move by online reservation centric companies (hotels too) to further squeeze out the human element of the booking and transaction facet of digital business. SnapShot’s development of “Grid II”, or as the company calls it; “SnapShot Analytics”, helps complete the bigger picture of unified hospitality business controls.

All that’s missing in such an integration of services would be what my friend Brian Solis calls “Experience Architecture”. This recent article by Brian discusses the kind of development we may be seeing from Shiji and SnapShot. To quote the world’s most influential digital business consultant:

Among the greatest catalysts for change is that customer behavior and values are so radically different from current norms and models that simply solving for “what digital customers would do” reveals your priorities and next steps.
— Brian Solis

Another key idea Brian brings to the discussion is strategy. While tech groups continually discuss the tools with which companies or clients can do this or that, Solis is long since past the novelty of discovering tech. What we are seeing come into being now are companies geared to deliver on promises. Everybody from Expedia to Russia’s Oktogo (Travel.ru now), and the huge distribution moguls promises tools, tools, tools. A tiny fraction really do “get it” as far as the coming customer conversion trend. Instead of asking “what is it we are trying to scale and why?” companies can never seem to make anything that truly makes a difference. “Big Data” and decision making intelligence has so much potential, but not when it requires a missile scientist to operate it.

This is the rub on the consumer and the business side of the digital equation. Onlookers must also factor in such Alibaba moves as the O2O services one with KFC in China. O2O, for those unfamiliar, mimics  brick-and-mortar retail, and targets online shoppers to take part in more physical retail. This mobile to physical component is ripe for integration with not only hotel demand management intel, but for restaurants and ancillary services like transportation as well. How many tables are free at your restaurant?

To sum up here, based on my own experience with hotels owners I foresee the following need needing to be met. I have a friend who owns one of the most successful hotels in all Greece. Knowing full well the nightmarish world of distribution systems, OTAs, marketing channels, and operational obstructions he has to face, one shining beacon plays out in my dream hotel operator’s cinematic. Instant, portable, and supremely powerful status reporting. My friend has to literally micro-manage every functioning element of his business, usually in person. With the right data power, and the perfect demand management capability, at his fingertips on a smart device, my astute hotelier friend could have a life again. He and hundreds of thousands of others endeavor to adapt now, but the perfect catalyst has yet to come along.

This may be where east meets west in hospitality investments and ideas is leading. At least this seems a reasonable assumption. I know 100 small hotel owners at least, who pray about this every night after a last check on the extended bookings outlook.