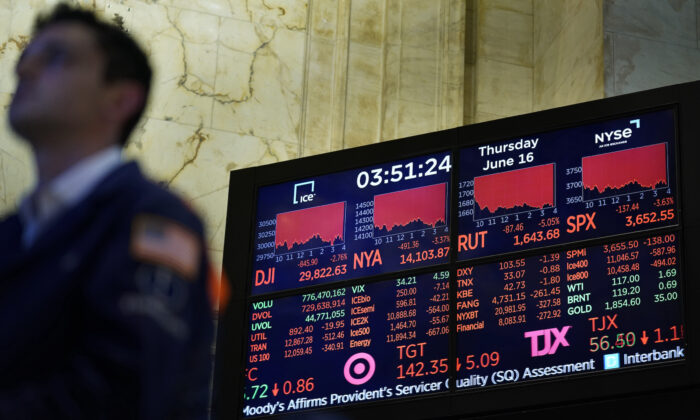 What’s Behind the Current Market Crash

Canada to experience a worse recession than the US, say analysts
By Rahul Vaidyanath

The first half of 2022 has seen financial market carnage of historic proportions, from stocks to bonds and even cryptocurrencies. Analysts say the rout is part of the process of markets assessing how severe the next recession will be, along with the reckoning that central banks no longer have the markets’ back.

“There’s been this sort of implicit asset guarantee, and that got much stronger during COVID, … [that] if markets crash, the central bank will step in. That belief is now fading—as it should—but at any rate it is now fading,” Peter St. Onge, research fellow in the field of economic policy at Washington, D.C.-based The Heritage Foundation, told The Epoch Times.

The former senior fellow with the Montreal Economic Institute sees a potential recession as being most similar to what took place in the early 1970s due to elevated inflation. However, he said he believes the amount of debt in the financial system could make the eventual drawdown far more painful.

“We have never quite been in this uniquely bad series of policy mistakes, right? Screwing up the economy, pumping out so much money [leads] to inflation, and then subsidizing debt to the degree that our entire financial system was fragile,” St. Onge said, adding that nobody knows how far asset prices can drop under these circumstances.

He added that if stocks fall too far—whatever that level may be—central banks will have to start cutting interest rates all over again.

The S&P 500, a broad gauge of the biggest U.S. stocks, finished the first half of 2022 in bear market territory—down more than 20 percent from its most recent highest closing level. This represents a loss of US$8.5 trillion and the worst first half decline since 1970.

Normally bonds rally when stocks swoon, but U.S. government bonds lost 11 percent in the first half of 2022. Deutsche Bank noted that its U.S. 10-year Treasury proxy index saw the worst first half since 1788.

But bonds have rallied noticeably since early June, which typically indicates worse economic days ahead such as the likelihood of a recession increasing.

David Rosenberg, founder and president of Rosenberg Research, in a July 4 interview with BNN Bloomberg compared the current predicament as the “mirror image” of the emergence out of the first lockdown in early 2020, when central banks cut rates to zero and provided markets with ample stimulus by financing significant government spending. The economy quickly rebounded from a sharp lockdown-induced recession and markets soared.

But now, central banks are fighting runaway inflation by rapidly raising interest rates while removing stimulus from the financial system, and thus markets are in free fall.

He explained that the more than 20 percent decline in the first half of 2022 for U.S. stocks was just the beginning, reflecting the removal of excessively high valuations, due to extremely low interest rates.

“We haven’t seen the recession hit to earnings or analyst earnings estimates just yet,” he said.

The factors that were pumping up stocks and bonds are reversing, resulting in “a great re-pricing of assets,” Purpose Investments’ chief market strategist Craig Basinger said in a July 4 note to clients.

“The magnitude of the wealth decline cannot be overstated,” he said.

Of note, bitcoin has neither provided effective protection against rising inflation nor offset the fall in stocks and bonds as an asset meant to provide diversification in a portfolio, as some touted it to be. Instead, the cryptocurrency had its worst month on record in June when it fell 40 percent. In the first half of 2022, bitcoin was down 58 percent.

Canadian stocks have fared better than many global stock markets due to their exposure to energy, which was up 23.6 percent in the first half of 2022, with the Toronto Stock Exchange index only down 11.1 percent. However, analysts expect a worse recession in Canada than in the United States, primarily because of its housing market.

“The Canadian economy is far more rate-sensitive than the U.S., given the frothy housing market and high household debt. With high debt levels, there is a distinct possibility that the next Canadian recession will be more severe than the one in the United States,” Basinger said.

When Canada enters a recession, the lion’s share of weakness in the economy comes from housing, says David Doyle, head of economics at Macquarie Group.

Pain or Relief Ahead? US Stocks Say Goodbye to Worst First Half in 50 Years

He told BNN Bloomberg on July 4 that residential investment as a share of gross domestic product is about 10 percent in Canada, whereas in the United States it is less than 5 percent.

“We have a far more severe structural imbalance here and given the fact that housing is likely to drive much of the weakness in Canada’s economy as it has in past recessions. We think the effects of the recession will be much more severe in terms of the draw down on GDP [gross domestic product] growth in terms of how high the unemployment will rise,” Doyle said.

Canada’s economy has already shown signs of slowing, as economic growth of 0.8 percent in the first quarter of 2022 was lower than the last two quarters of 2021.

Nomura‘s base case is a global recession in the next 12 months. The Japanese investment bank also forecasts deeper recessions for economies with debt-fuelled housing booms like Canada.

“At this point, weakness in equities reinforces our forecast for much tougher economic growth conditions through the turn of the year, as the market almost always leads activity on the ground by 6 to 12 months,” said BMO senior economist Robert Kavcic on June 30.

Rosenberg said that on average the S&P 500 usually peaks six months before a recession and that usually the stock market bottoms two-thirds to three-quarters of the way through the recession. Given that he assesses the recession to be just beginning, he said the fourth quarter of 2022 will present a great buying opportunity in stocks.

“Patience and discipline are the order of the day if you’re an equity investor,” Rosenberg said.

As a recession playbook, St. Onge suggests that businesses trim their inventories and be cautious in hiring, and says that if investors are in it for the long haul, then there’s less to be concerned about.

“Just as long as your [investors’] horizon is five or 10 years, just leave it be, don’t even worry about it. Keep dollar-cost averaging.”