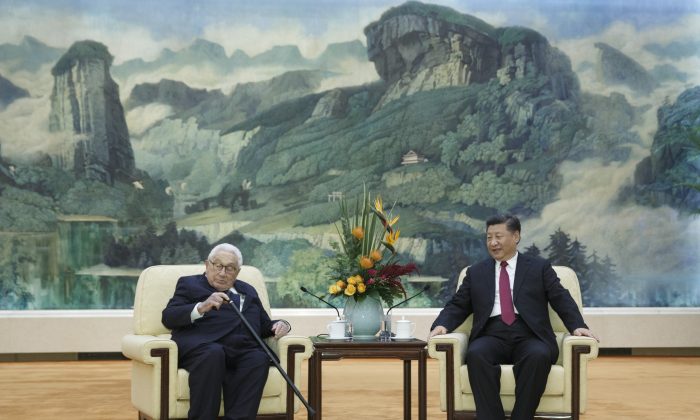 As the Sino–U.S. trade war shows no signs of abating after the 2018 midterm elections, Beijing may be signaling a willingness to work with American trade demands, of which a central issue is China’s plan to dominate high-technology manufacturing, called “Made in China 2025.”

On Nov. 8, Chinese leader Xi Jinping met with former Secretary of State Henry Kissinger in Beijing. During the meeting, Xi told Kissinger that “the United States should respect China’s right to develop in the path chosen by ourselves and our reasonable interests.”

Xi also confirmed that he and President Donald Trump “will have in-depth discussions on issues of common concern” in Argentina during the G-20 summit that is to be held on Nov. 30 and Dec. 1.

On Nov. 7, the day before the Xi-Kissinger meeting, Trump made reference to “Made in China 2025,” saying at a press conference following the midterm elections that “China got rid of their ‘China ’25’ because I found it very insulting.”

The “Made in China 2025” plan was announced in 2015 by Premier Li Keqiang. Its aim is to develop China into a “powerful manufacturing state” from a “big manufacturing state” by 2025, placing particular emphasis on research and development in the country’s technological and scientific field.

China’s 2025 plan has been criticized as being largely reliant on industrial espionage, primarily targeting the United States and Europe.

With the onset of the Sino–U.S. trade war that began this spring, which has targeted hundreds of billions’ worth of Chinese export goods, the Trump administration has been putting more effort into combating intellectual property theft, an issue that Trump has criticized China about on multiple occasions. Meanwhile, the Chinese Communist Party (CCP) has apparently instructed media mouthpieces under its control to tone down mentions of “Made in China 2025.” Xinhua hasn’t used the term since June 5.

Many China-watchers say that the Chinese regime hasn’t given up its ambitions, but merely driven them underground. Trump, however, believes that China has really scrapped the plan, due to economic pressure.

“If you know, China has come down tremendously. China would have superseded us in two years as an economic power; now, they’re not even close,” he said.

Xia Xiaoqiang, a China affairs commentator, wrote in the Chinese-language Epoch Times that “the only possibility is that the CCP promised Trump it would give up the ‘2025 plan.’”

Based on a recent speech made by Chinese vice president Wang Qishan, Xia believes that “it’s very possible that the CCP will make compromises in future U.S.-China negotiations.”

Wang spoke Nov. 6 at the Bloomberg New Economy Forum in Singapore, saying that economic and trade cooperation is the fundamental driver in a healthy and stable U.S.-China relationship, the essence of which is mutual benefit and win-win. China is willing to conduct consultations with the United States on the issues of mutual concern, and push to reach a mutually acceptable plan on economic and trade, he said.

Under the Trump administration, the United States has maintained its economic demands on China, which include compliance with World Trade Organization (WTO) rules, ending infringement of U.S. intellectual property rights, and stopping protectionist measures that restrict market access to China.

Trump tempered his criticism, saying, “we’ve gone way up. They’ve gone down. And I don’t want them to go down.”

Speaking about his aims for the G20 summit, Trump said, “we’re going to try and make a deal with China because I want to have great relationships with President Xi, as I do, and also with China.”