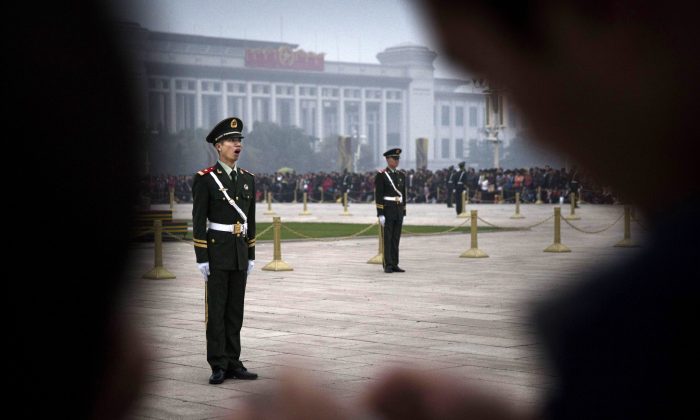 A Chinese paramilitary soldier yawns as he stands at attention while guarding in Tiananmen Square on Oct. 20, 2014 in Beijing, China. (Kevin Frayer/Getty Images)
China

In China, the Party Can Call Anything a State Secret, Including Public Information

Two current legal cases in China have shone a light on a vaguely-worded, but highly powerful instrument wielded by the Communist Party: State Secrets.

One target is China’s former security boss, Zhou Yongkang, who was charged with three crimes: receiving bribes, abusing power, and leaking state secrets. (Which secrets is not yet clear.)

The other is the trial of Gao Yu, a veteran Chinese journalist who was just jailed for seven years, for giving an overseas Chinese news magazine a copy of a Party document.

In both cases, observers are asking themselves: what exactly counts as a state secret in China?

No one can tell what is a state secret.
— Xu Wenli, Chinese democracy activist

In Western democracies, classifications can usually only be given by a limited number of government agencies, and the information must be intelligence, military, and other information related directly to national security.

In China, it’s not that simple.

In Gao Yu’s case, she is accused of sending an electronic copy of Document No. 9, a secret Party ideological directive about stamping out discussion of ideas like democracy and civil rights, to the founder of Ming Jing, an overseas media outlet, via Skype.

When she sent it the contents of the document had already been widely reported—including appearing government-linked websites, and questions have been raised about the official process under which it was classified as a state secret in the first place.

Nevertheless, on April 17, a court in Beijing sentenced the 71-year-old to seven years in prison.

Zhou Yongkang’s case seems more complex, though the definition of a “state secret” also appears to be used expediently by prosecutors. According to Reuters, who cited two unnamed sources with “ties to the Chinese leadership,” Zhou in early 2012 told former Politburo member and close ally Bo Xilai that Party investigators were planning to take him down.

Whether this particular charge will appear as part of the trial against Zhou is still unclear.

The Party has a huge incentive to keep its state secret laws broadly defined—foreign businesses are forced to tip-toe around information they get from Party members; dissenters and critics can be silenced with a state secret charge; and political enemies can be conveniently taken down.

Laws on state secrets have been vague from the beginning of the People’s Republic.

For instance, the list of state secrets in the 1951 regulations ranged from obvious areas like national defense and foreign relations to culture and hygiene. While different levels of secret classification were introduced in the 1988 update, and Internet regulations were added in a 2010 amendment, the Chinese regime has done little to define the information they consider grave enough to send someone to the gallows for leaking.

“No one can tell what is a state secret,” said Xu Wenli, formerly a senior research fellow at Brown University, and a longtime Chinese democracy activist, in a telephone interview.

“Who decides what a ‘state secret’ is?” Xu Wenli asked. “There isn’t genuine rule of law in China, so no one will receive a fair trial.”

Many organizations in China can decide to classify information as state secrets, with little transparent process or ability for judicial review. Susan Finder, a law professor with the University of Hong Kong, found that apart from the Party and its legal and security apparatus, institutions like the Chinese Red Cross, Tsinghua University, and China Aerospace Science and Technology Corporation can make state secret classifications—sometimes even annoying cadres in the security apparatus.

Nicholas Bequelin, the East Asia director for Amnesty International, made a series of posts analyzing the origin and use of state secrets laws in China. His conclusion: “State secrets charges have long been the weapon of choice to silence critics, dissenters, journalists and party foes.”