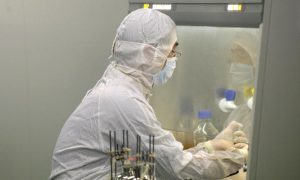 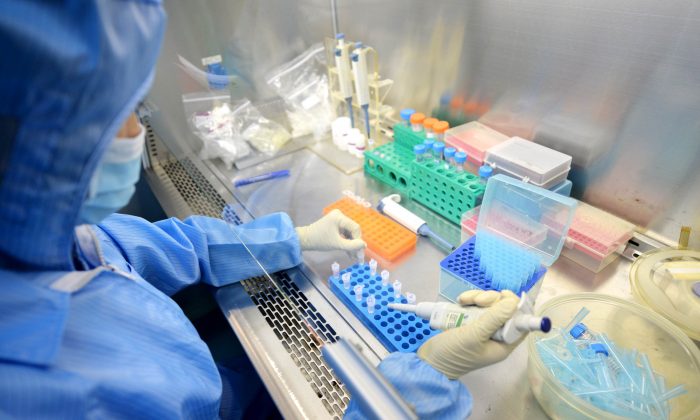 A worker in a laboratory at Shenzhen Puruikang Biotechnology Co., Ltd. on August 26, 2014 in Shenzhen, Guangdong province of China. (VCG/VCG via Getty Images)
Thinking About China

What Will China Do With Your DNA?

Editor’s Note: In Parts I and II, Steven Mosher wrote about the Chinese Communist Party’s program to collect the DNA of all Chinese citizens. This was, he suggested, an effort to develop a fourth “magic weapon” of control over the Chinese population. The first three “magic weapons,” outlined by Chinese leader Xi Jinping in a September 2014 speech, are “the People’s Liberation Army, propaganda, and United Front tactics.”

But this effort also extends beyond China’s borders. Here, in Part III, Mosher discusses ways in which the CCP is able to collect foreign DNA and how it might be able to profit from, or even weaponize, the genetic information it acquires from analyzing it.

The Chinese party-state is using various means to collect the DNA of Americans, starting with the outright purchase of U.S. biotech companies.

China’s state-funded BGI, for example, bought the U.S. sequencing company Complete Genomics, giving the Chinese company access to a DNA database that contained the private genetic information of large numbers of Americans. But that was only the beginning for the Chinese sequencing giant.

According to a recent report (pdf) from the U.S.-China Economic and Security Review Commission (USCC), BGI “has formed numerous partnerships with U.S. healthcare providers and research organizations to provide large-scale genetic sequencing to support medical research efforts.” Because BGI, like Huawei, is in part subsidized by the state, it is able to offer genomic sequencing, data analysis, and storage for genetic and clinical data on the cheap.

But though its services may be cheap, they are not free.

The payoff for BGI in this arrangement, says the USCC report, is “access to genetic sequence data as well as clinical data on people within the US.” Of course, since it is collecting data from not just one, but a great many different research projects, this one Chinese company may be amassing a database on Americans that is perhaps larger than any other one currently in existence.

In addition to BGI, the report identified no fewer than 23 companies associated with China that are currently accredited in the US to perform molecular diagnostics or other genetic testing, including whole genome sequencing. Each of these companies “has access to individual patients’ genetic data.” Hospitals, clinics, and even some commercial DNA testing companies in the United States now routinely send DNA samples to China to be analyzed.

Given that China is collecting and analyzing the DNA of tens of millions of its own citizens (as I discussed in Part II of this series), companies in China have economies of scale that no other country can match. It would be surprising if some of the commercial DNA companies did not take advantage of this “China price.”

DNA testing by “ancestry” services was one of the most popular gifts that family members gave each other this past Christmas. In all, more than 12 million Americans have collected and mailed a sample of their DNA to be analyzed by a commercial DNA testing company discover their ancestral lineage.

It is, after all, great fun to rediscover long-lost family members, one’s ethnic identity, and distant ancestry. Even presidential candidates are eager to demonstrate that they have Native American ancestry, for example, even if the test reveals that they are only fractionally correct.

The downside is that some of those who send their saliva sample off to be analyzed may actually be paying for the “privilege” of handing over their personal genetic codes to the Chinese state. Who wants to be an unwitting collaborator in China’s massive DNA collection program?

I queried the major DNA testing companies—MyHeritage, AncestryDNA, and 23andMe—concerning where their genomic analyses are actually being done.

If you have already had your DNA tested by AncestryDNA or 23andMe and you are concerned about privacy, you will want to avoid uploading your raw data into other databases. The websites of companies such as China’s WeGene actively solicit such uploads on its homepage on the promise of an analysis of your ancestry. But its user agreement acknowledges that it will “provide such information to the relevant national authorities, if necessary.” The Party-state’s efforts to create a massive DNA database mean that this “necessity” already exists.

There is no question that any genetic data stored on Chinese servers owned by private companies can be accessed by the party-state at will. Recently passed laws in China, such as the 2015 National Security Law and the 2016 Cybersecurity Law mandate that companies cooperate with the authorities.

Whatever privacy protocols may have been contractually promised by Chinese-controlled companies to their American partners are worthless. All Chinese high-technology companies, especially those working in the eleven high-tech areas identified in the “China 2025” plan, and regardless of whether they are state- or privately owned, are working hand-in-glove with the state.

This does not mean that, if your genomic data is stored in the United States, it is completely secure against acquisition by the Chinese party-state. Given the relentless cyberattacks emanating from China, it may not be.

According to U.S. cybersecurity firm Mandiant, the number of state-directed hacking attempts targeting U.S. biotech companies has dramatically increased since 2008. To judge from the number of publicly reported breaches, which the USCC report lists in great detail, many of these have been successful. Cybersecurity in the health sector in general, and in the biotech sector in particular, appears to be marginal at best.

U.S. laws protecting the privacy of health data are weak as well, especially in the area of genomics. As the USCC points out in its report, “Because [“ancestry” DNA testing] are marketed as consumer products and not medical services, … the handling of the data is not covered by the Health Insurance Portability and Accountability Act (HIPAA) healthcare data protection law, raising concerns about privacy and data security.”

The United States needs to do a far better job of protecting the genetic privacy of its citizens. A good first step would be to prohibit the testing of American DNA in China, as well as the forbidding the transfer of American genomic information to that country. The protection of American genomic data is a national security issue.

Biotechnology, like many other cutting-edge technologies, is dual-use technology. This means that China’s huge database of American genomic and healthcare-related data could be put to military, as well as civilian, use. The risk to national security is real.

At least two possible avenues of attack have been raised, using technologies that are already readily accessible in China, and which could be weaponized in a well-funded, state-sponsored program within a few years at most.

The first scenario involves targeting individuals. As the USCC report writes, “China could target vulnerabilities in specific individuals brought to light by genomic data or health records. … Individuals targeted in such attacks would likely be strategically identified persons, such as diplomats, politicians, high-ranking federal officials, or military leadership.”

Imagine that China was able to obtain the DNA of the president of the United States, and then engineer a specific pathogen targeted at that person and his close relatives. A targeted strike against a small, genetically related group (the Trump family?) would eliminate a major obstacle to China’s drive for dominance.

Would it be possible to bioengineer a very virulent version of, say, smallpox, that was easily transmitted, fatal to other races, but to which the Chinese enjoyed a natural immunity? While no use of an advanced, genetically targeted bio-weapon has been reported, it would surely not be beyond the reach of China’s booming biotech industry. Given our present ability to manipulate genomes, if such a bio-weapon can be imagined, it can probably—given enough time and resources—be realized.

Would the one-party dictatorship that rules China have any moral compunctions about developing and deploying such a weapon? Clearly not. After all, a regime that selectively executes innocent religious believers because they are a tissue match for anyone who is willing to pay for an organ transplant obviously regards human lives as a disposable commodity.

A bio-weapon that would target another race, or races, but leave carriers of the Chinese genome unscathed might well be viewed by the Party leadership as the perfect biological weapon of mass destruction.

In the worst-case scenario, one can imagine that such a superbug would ignite a plague of biblical proportions among the peoples of the world. After it had largely scoured the planet of people, the Chinese Communist Party would have an open field for expansion.

The thought is chilling.

In a largely depopulated world, the Party would not even need to use its first three magic weapons. There would be no armies for the PLA to vanquish, no people for the propaganda corps to brainwash, and no foreign organizations for the United Front Department to infiltrate, co-opt and control.

The fourth magic weapon—DNA—would be all that was needed.

Steven W. Mosher is the president of the Population Research Institute and the author of “Bully of Asia: Why China’s Dream is the New Threat to World Order.” He studied human biology at Stanford University under famed geneticist Luigi Cavalli-Sforza.