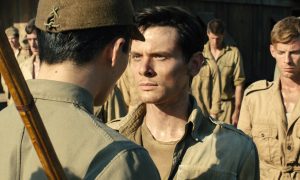 Film Review: What Went Down in Northern Ireland in ’71

Thanks to Scotland’s independence referendum, Northern Ireland will probably get a taste of devo max. The increased autonomy would hardly have satisfied the irrationally violent “Provisional” IRA in the 1970s. One British soldier stranded in the wrong neighborhood will try to elude the faction’s death squad, but there will be other interested parties also hunting him in Yann Demange’s “’71.”

Private Gary Hook’s unit has been hurriedly dispatched to Belfast, which is just as much a part of the U.K. as Piccadilly Circus or Leicester Square. Yet, it is most definitely dangerous duty.

Rising star Jack O’Connell looks ridiculously young and lost in the grim, battle-scarred world, but that is the whole point.

On his first waking day in Northern Ireland, Hook finds himself facing down a mob. Trying to build trust, the relatively green lieutenant sent them out in berets rather than flak helmets. In retrospect, this was a mistake. As the chaos spirals out of control, Hook and his mate Thompson are separated from the unit. Thompson takes a bullet to the head from a Provisional assassin, but Hook is able to elude the gunman and his partner.

Hook finds a temporary refuge, but he has no idea how to reach his barracks. He is surrounded by a Catholic population that would either like to kill him or is too frightened of the various IRA contingents to protect him. Nevertheless, he finds a guide in the form of the rabble-rousing 7-year-old nephew of a high-ranking Protestant paramilitary.

Unfortunately, this only leads to more trouble, when Hook narrowly survives an accidental bomb detonation that could deeply embarrass a small detachment of sinister British intelligence officers. Hook’s death would be quite convenient for them.

Demange’s “’71” has an overpowering sense of place, but instead of Belfast, it was shot in Liverpool, Blackburn, Sheffield, and Leeds, which does not say much for those municipalities’ urban ambiance. It looks like the entire city is a housing project (or an estate in British parlance). As night falls, Tat Radcliffe’s cinematography becomes ghostly disorienting, perfectly mirroring Hook’s increasingly confused state and powerfully reinforcing the edgy vibe.

Rising star Jack O’Connell looks ridiculously young and lost in the grim, battle-scarred world, but that is the whole point. In fact, he is quite effective as an earnest and innocent POV figure for the audience to identify with.

Many of the assorted combatants rather blur together, but David Wilmot stands out as Boyle, the local old-guard IRA leader. Babou Ceesay (who deserves to become a series regular after his guest spot on last season’s “Inspector Lewis”) is also terrific as the hard but decent Corporal.

However, Corey McKinley upstages everyone as Hook’s ferocious young ally. (Evidently W.C. Fields was right, even in Belfast.)

Despite portraying some pretty savage behavior on the part of the IRA factions and their sympathizers, Demange and screenwriter Gregory Burke go out of their way to paint the British Army in a negative light. (I’d still trust the honor and professionalism of Her Majesty’s armed forces over any other military, aside from America’s armed services.)

Regardless, Demange crafts a tight, tense, white-knuckle night of the soul. He certainly proves he can stage a riot. Although they are radically different in many respects, the one film that “’71” consistently brings to mind is Carol Reed’s absolutely classic “Odd Man Out,” which is a heavy statement.

Recommended on balance for patrons who appreciate gritty military thrillers, “’71” opens at the Angelika Film Center in New York on Feb. 27.