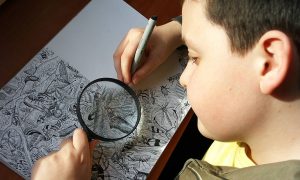 Kazuya Murata was 6 years old when he competed at the 2013 Asia Pacific Yo-Yo Championships last summer. He was the youngest competitor to make it to the top nine, and we can only imagine what a few more years experience and improved motor skills will bring this child who already has mesmerizing precision and rhythm to boot.

He was dubbed “Yo-Yo Baby” and given the hash tag #YoYoBaby.

Though the competition was last year, Murata’s fame really took off in May this year. A video of Yo-Yo Baby in action was posted to Reddit.

The boy is totally calm on stage and moves fluidly with rhythm. He looks bored on stage before the music starts, not excited or nervous.

Ahmad Kharisma, 14, came in first place at the competition.

The World Yo-Yo Contest is set to be held August 7 to 9 in Prague, Czech Republic. The first of these contests was held in 1932, and the winner was Harvey Lowe, a Canadian radio presenter. He mastered some 2,000 tricks and rubbed elbows with the rich and famous, including the Prince of Wales.