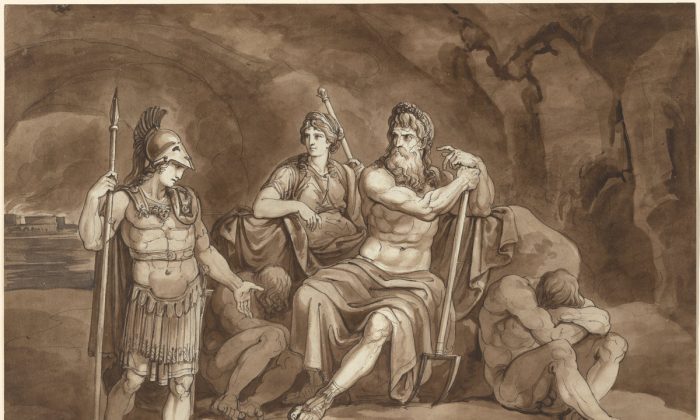 Bartolomeo Pinelli (1781–1835), "Telemachus Requests Permission from Pluto to Seek His Father in the Underworld," 1809, pen and brown ink with brown and gray wash over graphite on heavy laid paper. (William B. O'Neal Fund/National Gallery of Art)
The Case for an Education Based on Virtues

What ‘The Odyssey’ Can Teach Us

If one were to ask the question, “What—in one word—constitutes the most powerful methodology for teaching and learning in all human experience?”, what would your answer be? If you are having trouble answering that question, here’s a clue: It’s connected to “The Odyssey.”

I do not want to idealize the ancient Greeks too much, or try to suggest it was all a golden age back then, 2,500 years or so ago. Let’s be clear: Some of the Greeks—take the Spartans, for instance—had rather severe ideas of what constituted a real education.

The Spartan male education system, called the agoge, set up by the lawgiver Lycurgus, insisted on a range of things that we might now consider undesirable. At birth, a baby was washed with wine to make him strong, and if the baby was deformed or misshapen in any way, it would be killed; they were encouraged to steal to supplement their measly diet; and—my favorite horror—they learned to read and write, but all books and literature were banned except Homer, war songs, and war poetry. Not what you might call balanced, then.

But in Homer’s “The Odyssey,” a permissible book, we find the word “mentor,” or “mentoring” as the action. And it is interesting that the action is named after the character in the story, for that, too, is an important clue. Education is nothing if not personal, as Mentor was a person.

In a world where everything, including teaching, training, and coaching, is online—where the drive to reduce costs is paramount, so audio, video, and e-learning packages are replacing direct human inputs—we have the person as the heart of a true education.

Who was Mentor and what was his role in “The Odyssey?” Mentor was the wise and older friend of Odysseus who was asked by the hero to look after and educate his son in his absence. Mentor’s success is shown by how Telemachus, the son of Odysseus, rises to the challenges of manhood—and his destiny—as the story reaches its climax.

So the best way to educate anyone is to mentor them, and without mentoring, it is difficult (though not impossible) to be educated. We need to look closely at what happens in “The Odyssey” to fully understand the scope of this form of education versus what we now have in the Western world.

First, there is the understanding that the personal, and so the subjective, is at the root of a true education. Unless we see learning as personally relevant to us, and subjectively buy into it, then what we are taught is dead knowledge. Contrast this with how impersonal and objective education is in most current Western democracies, mostly fit only for passing tests and obtaining qualifications. Furthermore, true education is wisdom-oriented as opposed to knowledge-based; character-focused rather than exam-based; and experiential rather than academic.

Wisdom means that true learning is always value-laden—that is, it has a moral dimension—rather than being, as the West likes to pretend, value-free (if such a thing could ever really be). And further still—and more controversially—education always respects the gods, whereas in the West, we ignore them.

Put another way, the Mentor-style is open to ambiguity and the mystery of the cosmos, whereas a modern education shuts that down, for even what we don’t know becomes a source of commentary on how science soon will.

The mentoring approach, then, is age-led, not youth-focused—the younger generation learns from the older. It is respect-driven, not child-centered; it is rooted in culture, not multicultural; and finally, and perhaps most significantly, it is life-preparatory, not simply utilitarian and job-relevant.

This is a litany of profound differences, and one could comment in much more detail about the effects of these differences, but perhaps the most profound one is the alienation the average person in the West feels, not only from his or her fellow citizens, but from his or her country, and even from the cosmos.

We have become disconnected from each other and from the world, and we can see this reflected in the crime, depression, and suicide rates that continue to rise. And education—supposedly our cure for all ills—is implicated in their manifestations.

But there is something else in the Mentor myth or story that is also important to comment on. So far, the narrative I have supplied has been entirely a male discourse, with no mention of a female poet, Odysseus’s mother, or any other woman. However, mentoring, properly understood, is not a purely male phenomenon—far from it.

All parents need to undertake or aspire to mentor. Many do so without consciously realizing they are doing it. However, in the case of Telemachus, a male, it is clear the male needs another male role model in order to cross that bridge into manhood, just as a female needs a strong female role model for her to achieve full womanhood.

But is that the end of the story—that men need men and women need women in order to develop fully? “The Odyssey” implies not.

Fascinatingly, whereas Mentor is the father-figure substitute in the poem, he also dies before the end of it, and his role is taken over by the goddess Pallas Athene, who assumes his exact shape and form, and continues Telemachus’s education. Before considering this unusual development, let’s briefly consider who Pallas Athene was.

Notice a number of small details here: Wisdom has no childhood; it’s fully formed. This reminds us of our own best thinking, which comes not from assiduous and long-winded calculation, but in whole visions that come in aha! moments.

The femininity of wisdom is ancient. Even in the Bible’s Book of Proverbs, Wisdom is feminine. And Pallas Athene’s mother is Metis, whose name means “intelligence” or “cunning.”

Thus, in the story of Telemachus and his mentors, we see that the whole education of the person is personal, and needs structured inputs from both male and female personalities.

In short, what the Greek myth points to is the need for balance, harmony, and a holistic approach that enables each individual to fulfill his or her destiny—and to have a destiny at all. Today, we talk less about “destiny” and more about purpose. “Purpose” is a great word, but still a lesser word than destiny.

Many people have discovered their “purpose,” but it is relatively trivial. A destiny—when one fulfills one’s true purpose—can never be trivial, for in this, one is aligned with the “will of heaven.” Hence, the mentoring involves a mortal (psychological) component and an immortal (spiritual) dimension.

Much more could be said, but it should be obvious from the catalog of differences I have outlined that so much is wrong with the Western approach to education, and that we can still learn from the Greek myths.

Let me leave you with a wonderful observation from English writer G. K. Chesterton on our modern situation—and he was writing this a hundred years ago: “The people who are the right guardians of normal ideas, have been bullied and bludgeoned by bad materialistic education till they are simply stunned and stupefied.”

Has anything improved since then?

James Sale is an English businessman and the creator of Motivational Maps, which operates in 14 countries. Sale has authored more than 40 books from major international publishers, including Macmillan, Pearson, and Routledge, on management, education, and poetry. As a poet, he won first prize in The Society of Classical Poets’ 2017 competition.

James Sale
Follow
James Sale has had over 50 books published, most recently, “Mapping Motivation for Top Performing Teams” (Routledge, 2021). He won first prize in The Society of Classical Poets 2017 annual competition, performing in New York in 2019. His most recent poetry collection is “HellWard.” For more information about the author, and about his Dante project, visit TheWiderCircle.webs.com
More articles from this author
A New and Important American Poet: Andrew Benson Brown
sharecomments
How Can We Best Educate Our Children?
sharecomments
100 Days of Dante: What’s the Big Deal?
sharecomments