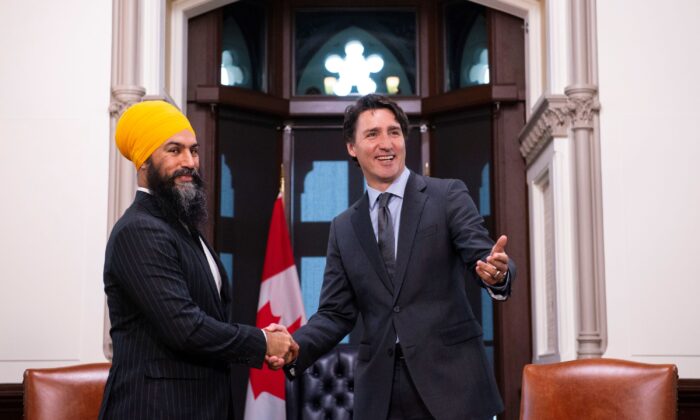 What the Liberal-NDP Alliance Means for Each Side, and the Tories

The Liberal-NDP alliance to secure confidence votes for the minority Liberals could play out differently to each party’s expectations. It could also impact the Conservative leadership race and influence the fortunes of the candidates differently.

The benefits of the arrangement are clearer for the Liberals, who can more comfortably govern until an election in 2025, but they’re less clear for the NDP, says Scott Bennett, a political science professor at Carleton University.

“As the Liberals claim, they gain a little more stability. They talk of stability for the country, but they really mean stability for their party. They may lose a little bit if disagreements arise and the NDP can claim that the NDP are the true voice of progressive policy in Canada,” Bennett said in an interview.

“The NDP gains a perception of having a bit more potential leverage and support in government decisions. However, if we can judge from some limited earlier experience from this sort of arrangement, it will likely lead to a reduction in their vote in the next election unless they can appear to be the true voice of progressive change to a lot of people who don’t normally vote for them.”

Melanee Thomas, a political science professor at the University of Calgary, says whenever the Liberals advance anything with NDP help, the former gets more out of it at the polls.

“The NDP will probably end up losing out of this. So what has happened in the past is that [in] the election following all of this stuff being successfully implemented, the Liberals have been like, ‘look at this amazing thing we did.’ And they dine out on it. The NDP gets forgotten as the partner that pushed the agenda,” Thomas said in an interview.

The last time Canadian parties made a similar arrangement was when the B.C. NDP gained the support of three Green Party MLAs in 2017. The Greens had tripled their seat count to three and doubled their votes in the provincial election that year, only to lose almost 50,000 votes and one seat three years later in the 2020 election.

Bennett believes the Liberals and NDP’s policy alignment extends to the handling of the pandemic, an issue that otherwise divides Canadians, especially following implementation of the Emergencies Act to deal with the convoy protests. But he says the NDP risks internal tensions in this arrangement, similar to what transpired when it propped up the minority Liberals under Pierre Trudeau following the 1972 federal election.

“The current loyal members of their party [NDP] tend to be people with extreme commitments to change, and they will be unhappy if change is not achieved through this agreement. Some of the more zealous traditional NDP supporters may drift away,” Bennett said.

He says the two programs cited as the cornerstone of the agreement to secure NDP support— pharmacare and dental care—will involve the provinces, and so progress will be slow, which would impede the NDP from showing fruits of its alliance with the Liberals.

“It could take years to work that out. Will the federal government try to bribe the provinces with cost-sharing arrangements? Will they try to work through a tax credit system? Will the federal government try to assume more direct control over these matters? No matter what approach is taken and how it is changed, it will create more problems for provincial and/or federal balance sheets.”

The agreement between the parties calls for free dental care for children under age 12 starting in 2022, to be expanded in 2023 to those under 18, seniors, and people with disabilities, and fully implemented by 2025.

The deal also calls for working toward a national pharmacare program by passing related legislation by 2023 year-end and then having the National Drug Agency develop a formulary of essential medicines and a plan for bulk purchasing by the end of the agreement.

More doctors, nurses, and mental health support, along with better data, advancements in the area of aging at home, and implementation of standards in long-term care homes are also expected. Among the other areas of focus are issues around affordable housing, reconciliation with indigenous peoples, and climate change policies.

Thomas says she and other political science colleagues view the current scenario as a predictable result of Canada’s Westminster system of governance.

“It’s important to keep in mind that the NDP very much remains in opposition. They’re not being brought into government. If they were, we would see New Democrats in cabinet. So this is more of an agreement to play nicely and to work together on some key issues that the NDP are driving.”

Jacqueline Biollo, a principal at Aurora Strategy Group, says the deal could demonstrate to the two parties’ support base that their leaders can work collaboratively to achieve results, but it may also impact how undecided voters cast their ballots in the next election to the parties’ detriment.

“Undecided voters may feel this agreement usurps democracy, infringing upon the electorate’s ability to vote for a party that aligns with their values or priority issues,” she said.

With eight contenders now running to be the next Conservative Party leader, the new political alliance carries greater risk for the more progressive leadership hopefuls, just as it does for the NDP, says  Henry Srebrnik, a political science professor at the University of Prince Edward Island.

“For the Conservatives, it may make it harder for [candidate Jean] Charest to gain the leadership because a moderate right party is less needed to offset a left-wing alliance. They may want to draw the distinctions more sharply,” Srebrnik told The Epoch Times.

In a statement, Charest called the deal “juvenile political theatre” and “a shameless move that further entrenches their anti-economic growth, anti-development and anti-democratic ideologies. Canada needs decisive and experienced leadership … [and to] grow our economy and build our country.”

Conservative MP Pierre Poilievre, another leadership contender, said in a video that it’s still possible to force a federal election before 2025, but he was the “only leader” who could do it.

“With a strong Conservative leader who knows how to win the debate and the procedural contests on the floor of the House of Commons, … we can mobilize the Canadian people to put pressure on backbench Liberals and NDPers who are not comfortable with this backroom deal [to bring down the government early]. I am the only leader who can launch that effort.”

Bennett says the Conservatives might find a win in the longer term should continued high and deficit spending manifest negative consequences.

“It does give them a chance to shape their communications with a bit more of a long-term perspective. The country is in serious economic trouble, and given time, this may be something that even aspirational and optimistic Canadians begin to take seriously,” he said.

“Yes, we may see some upward blips in tax revenue, but unless this is used very carefully, inflation will be further encouraged, and indebtedness will take on new importance for individuals, corporations, and even government.”

On the other hand, Thomas says that if Canadians like what they bought with their own tax dollars, it would make opposition to such programs more difficult.

“Pharmacare and dental care are probably going to be quite popular,” she said.