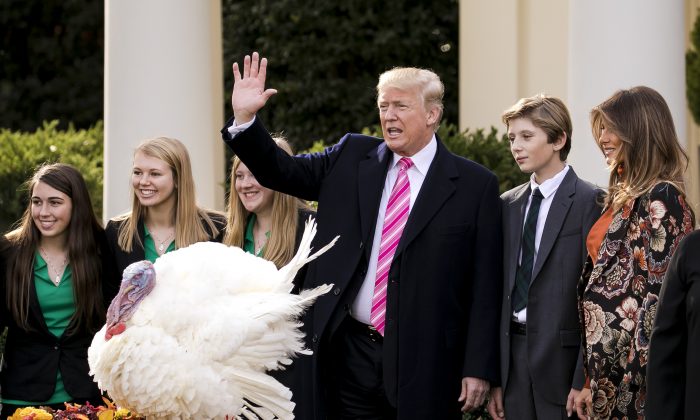 What the First Family Will be Eating for Thanksgiving

Celebrating their first Thanksgiving as the first family, the Trumps will enjoy a traditional dinner.

The menu includes turkey, stuffing, mashed potatoes, gravy, and sweet potatoes with marshmallows, according to Stephanie Grisham, a spokeswoman for the First Lady.

Locally sourced red snapper and Florida stone carp are also on the menu.

Accompanying the dinner are a variety of baked goods and cheeses.

Dessert will include various cakes and pies.

The first family will be joined by friends for the dinner at the Mar-a-Lago resort where they are spending the holiday.

Earlier in the day President Trump and First Lady Melania Trump visited the Coast Guard Station Lake Worth Inlet to thank the coastguards for their service.

Trump praised the Coast Guard for their rescue efforts after Hurricane Harvey hit Texas in August.

“Incredible people, you’ve done an incredible job, and I love coming in here and doing this for you today.”

Trump also held a video-conference call in the morning with service members in Afghanistan, Turkey, Kuwait, as well as those aboard the USS Monterey, which recently stopped in Souda Bay, Greece.

“We’re doing well at home. The economy is doing really great. When you come back, you are going to see with the jobs and companies coming back into our country and the stock market just hit a record high,” Trump said.