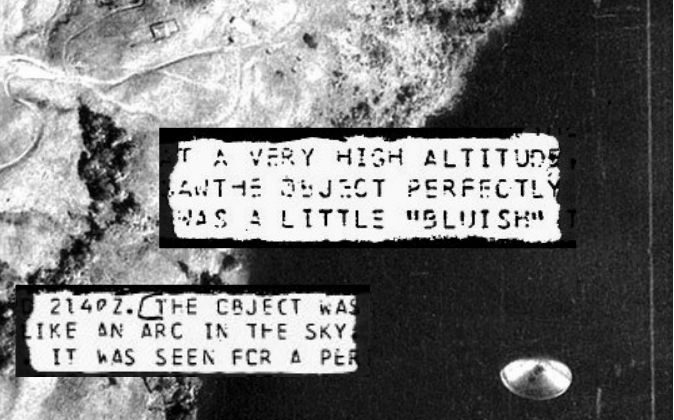 What Skimming the Declassified US Govn’t UFO Files Tells You

Top secret files on unidentified flying objects (UFOs) were declassified by the U.S. National Security Agency (NSA) as a result of a 1980 civil action suit brought against the agency by a group named Citizens Against Unidentified Flying Objects Secrecy.

Epoch Times has gone through the communications intelligence reports to collect some interesting tidbits.

Much of the text is heavily redacted, making it hard to glean much information.

In many instances, the acronym “UFO” is almost automatically followed by the parenthetical statement “probably balloons.”

The National Weather Service does release weather balloons from 102 sites throughout the United States, the Caribbean, and the Pacific daily, so there are quite a few floating around out there. They can also expand to about 35 feet in diameter.

Some of the reported UFO sightings in the documents, however, are not attributed to weather balloons and do not at all fit the characteristics.

It is unclear exactly who sighted the UFOs in each case, as names are redacted. Likewise, the context is often unclear due to redaction. Here’s a look at some of the highlights to give you an idea of what the government has officially recorded about UFOs. Each quotation is taken from a separate report.

Some of the reported UFO sightings in the documents, however, are not attributed to weather balloons and do not at all fit the characteristics.

“… took place six months ago in the [redacted] region, and the increase in flying saucer activity, which he explained as having a connection with the plan.”

“The object was described as having a semi-circle shape and looked like an arc in the sky. This object was also noted as being white and very large. It was seen for a period of about ten minutes and it seemed to just hang in the sky for a few minutes before moving on in a westerly direction.”

“The objects were indicated as friendly and numbering two, but that they were unidentifiable. Their altitude was not indicated. Their speed, as computed on chart, was approximately 930 kmh [577.8 mph]. Whether they were aircrafts [sic], missiles, or some other flying objects could not be determined.”

“Flying saucers reportedly observed flyer [redacted] space objects are observed traveling a southeastern to northeastern direction. The possible craft numbered 14, in groups of three with a faster larger object on each side of the shape of artificial flying saucers. [redacted] The above [illegible] disappeared over the horizon.”

“He had seen an object going up and down vertically, which was impossible to be an aircraft. It looked like a large star. [Redacted] The object was going up [illegible] at a fast speed and at a very high altitude, and that it kept turning ‘white luminous light’ that was a little ‘bluish’ in color.”

“Three luminous objects were seen in the western part of this city. The first object was shaped like a horseshoe and was white in color. The other two were round and yellow in color.”

“They described the first as having a luminous radiation of 24 meters (78.7 feet) extending in a spiral form from a [illegible] center. The approximate altitude of the object was given as being between three and four thousand meters, and it was stated that it later gained altitude and went in an easterly direction without noise. According to the [redacted], a second object, following the same trajectory, was sighted later at a higher altitude. The [redacted] observers supposed these objects to be guided missiles. … [Redacted] reported similar sightings of a third object which appeared to be a dirigible and was seen traveling from north to south at a very high altitude and a low velocity … He reported that one of the objects descended, in a spiral fashion, to an altitude of approximately 2534 meters (8313 feet) and radiated an intense blue light. These objects were reportedly visible from one to five minutes. One half hour later, [redacted] saw a third object traveling in the same direction and they presumed this to be a satelite (sic).”

“… sighted a UFO described as spherical or disc-like in form with established color, brighter than the sun, with a diameter of one-half the visible moon.”