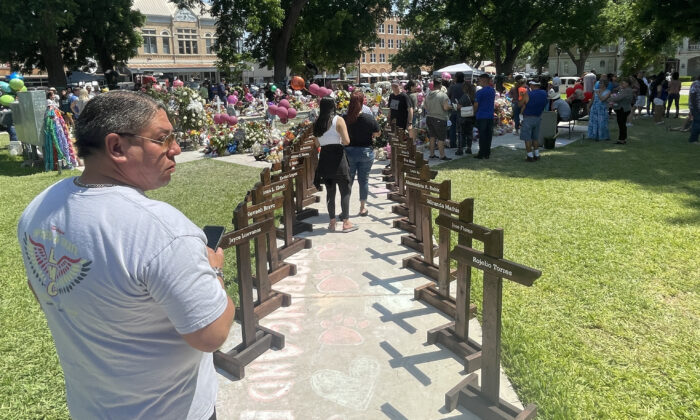 People visit a makeshift memorial for the 21 victims of an elementary school mass shooting in the town square in Uvalde, Texas, on May 29, 2022. (Charlotte Cuthbertson/The Epoch Times)
Viewpoints

Conrad Black: What Should Be Done?

In one respect President Joe Biden did speak faithfully for the nation when he returned from Southeast Asia and went straight to the White House and declared in his remarks about the appalling school murders in Uvalde, Texas, that he was “sick and tired” of these murders. So is the country.

He demanded the recovery of political “backbone” to ban assault weapons, clearly implying that he believed that that would seriously reduce the incidence of these terrible mass shootings. By indicating that he actually thought that he was proposing any kind of a solution when all informed Americans are aware that an assault weapon ban was attempted for 10 years and didn’t appreciably change the rate of incidence of such crimes, the president effectively acknowledged that he had no idea what to do.

In this too, he represented most Americans—everyone is very disturbed about this problem but has no idea what to do about it. But the country was looking to him to provide some sort of guidance toward a reduction of the problem of the use of guns in crimes. He failed in that mission and dumped the whole problem on to the “gun lobby,” which in fact has not really existed for many years. At least it was a better performance than he turned in when he told the Buffalo community where 10 people were murdered in a supermarket days before that it was the fault of Trump Republicans who want to “Make America Great Again.”

There are approximately 400 million firearms in the United States, and the jurisdictions with the strictest laws governing the ownership and use of guns are in many cases those with the most gun violence. The Second Amendment to the Constitution states that “the right of the people to keep and bear arms shall not be infringed,” because a “well regulated militia is necessary to the security of a free state.” When the Constitution was composed in 1788, including, in the Bill of Rights, the Second Amendment, the security of the about-to-be-launched United States meant that a “militia” effectively was every adult male citizen, who had the right to own a firearm. This not only assured a pool of manpower with its own weapons that could quickly be added to the army if needed; it also meant that everyone had to be able to defend his homestead.

The Constitution may be assumed to have been referring to both national and domestic security. As these concepts have evolved, any such constitutional provision affirming a right to “the people,” can certainly now be assumed to extend to women as well as men, as the right to vote does.

The route of constitutional amendment to effect any partial solution to the problem of excessive gun violence would require the outright abolition of firearms in the hands of private individuals, other than authentic hunters, gun collectors, and those who require guns to protect farm animals. Since there are 400 million guns in the United States and at least 70 percent of them aren’t in the hands of hunters, farmers, or collectors, this entire approach has no chance of success.

America’s gun-owners today rightly believe that any move to register all firearms is a prelude to trying to confiscate them. There’s no chance that the requirement of three-quarters of the states to approve a constitutional amendment could be managed in favor of anything remotely resembling a retrenchment to confinement to hunters, farmers, and collectors, the system in Britain and Canada. If there ever were some sort of enforced confiscation of privately held firearms (politically impossible and undesirable), it would merely leave the overwhelming majority of Americans who are law-abiding sitting ducks for the large and ingenious number of Americans who make or top up their incomes with armed robberies of homes and businesses.

A ghastly pun may be justifiable: There’s no silver bullet to resolve this profound problem. But there’s a range of measures available that could substantially ameliorate it.

Restoring the ban on sale of defined assault weapons would do no harm and might, if combined with other measures, achieve something useful. The ban on sales of firearms to anyone with any history of violent offenses or severe mental difficulties within the previous 10 years should be reinforced by an affidavit from any gun buyer that they’re not in those categories and won’t knowingly sell or otherwise consign their weapons to people whom they have reason to believe are in those categories. Computerized information should enable the swift apprehension of most dishonest affiants under these rules. I think America has to take the giant step of registering all guns, but it must reaffirm as it does so the right of all adult (meaning 18 and over) citizens, for their own defense, or other valid reasons, to keep and bear arms.

When these measures are in place, I believe it would be justified to mobilize the National Guard, and in some cases the Armed Forces, to enforce temporary curfews in the most crime-ridden areas of urban America and go through those areas meticulously routing out and confiscating all unregistered firearms and indicting and penalizing the offenders. A return to the “zero-tolerance” policies of the William Bratton–Rudolph Giuliani New York of the 1990s should be enforced throughout the United States. Stop and frisk (random police searches) should be brought back everywhere, provided there’s a mechanism for rigorous discouragement of it being used as a means of harassment and intimidation by corruptly intended police.

Of course schools and often churches must be protected by highly trained security personnel. At least 250,000 new police personnel should be recruited and trained up to a higher level than most American municipal and state police are now. Rules of engagement preventing a premature or excessive use of force should be clearly taught and rigorously enforced. Both the outrage of the George Floyd case and the tragic fiasco of police waiting for 48 minutes in Uvalde while the murderer within went about his evil work is illustrative, though extreme examples, of inferior police training.

Correctional practices should be reformed: First-time non-violent offenders who have served half their sentences should be released at once, and in future, first-time non-violent offenders, unless their crimes are very egregious, should not be incarcerated—they should be compelled to live in Spartan accommodations and contribute pro bono work to the private sector where they would be bonded against economic loss to their employers; vocational training should be made much more available.

While non-violent lawbreakers should be treated more constructively, prosecutors who are softening on violent offenders should, as appears to be likely to happen, be sacked, by the voters or higher-ups, as appropriate. Many urban areas are hopelessly crime-ridden, and not more than about 10 percent of felonies are successfully prosecuted in the worst districts. In the most severely crime-afflicted areas, the National Guard and the U.S. Army should be inserted for at least three months, and the local authorities should coordinate an upgrade of the personnel and techniques of the police according to exacting federal guidelines.

“Thoughts and hopes and prayers” are now much derided as consolations, and they’re certainly not a solution. But Americans should be encouraged to embrace the humane values and consolations afforded by the principal religions and by sophisticated non-theistic philosophy. Houses of worship are usually centers of useful pastoral activity, genuine human compassion, and sociable community activities. Up to 40 percent of Americans participate in such institutions despite the militant atheist tenor of the media and the entertainment community. No one who contemplates the horror of Uvalde, including the deadly police incompetence and obtuseness, should despise those who take some consolation participating in faith-based activities. In God we trust.