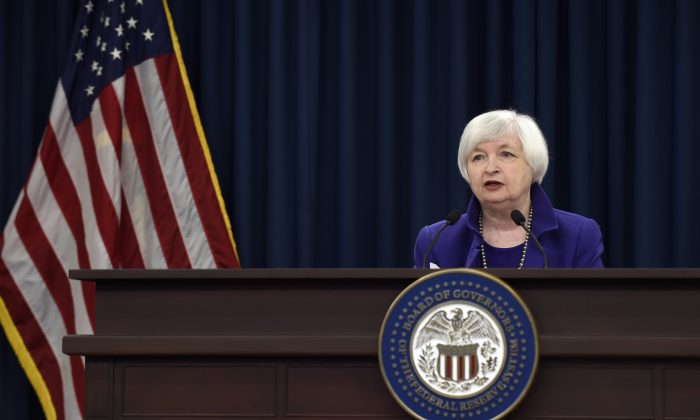 Federal Reserve Chair Janet Yellen during a news conference in Washington on Dec. 16, 2015, on the Fed's decision to raise its key rate by a quarter-point. (AP Photo/Susan Walsh)
Business & Economy

So the Fed finally did it. It raised interest rates by 0.25 percent for the first time since 2006. The media and the market expected the move. What many don’t know is how it is going to do it.

Central bankers and the media often make it sound like it’s as easy as pushing a button. Imagine Janet Yellen sitting at her computer with several choices on how to set rates: 0.25 percent, 0.5 percent, 1 percent.

In this case, she would push the 0.25 button and interest rates rise overnight—after all, it is called the overnight Fed Funds Rate.

To understand how the Fed raises rates, we first have to understand which rate it is raising. Especially the media (you see it in this headline as well) is guilty of simplifying the Fed’s fund rate to “interest rate” or just “rate,” as if this one rate represents all interest rates.

But the Fed fund rate is a very specific interest rate. Banks charge it when borrowing and lending required reserves to each other. They need to have 10 percent of their deposits stashed as required reserves at the Fed in electronic form so the Fed can keep lending under control.

At the end of one business day, Citibank may have done its books and found out it needs reserves because it has made too many loans or taken in too many deposits. Chase Bank might find it has too many reserves and will lend its surplus to Citi.

Of course, the Fed would never say it is reversing its QE program.

Because it’s a closed system, it always balanced out and supply and demand determined the interest on reserves—the Fed Funds Rate.

Because supply and demand determine the price, instead of pushing a button, the Fed has to go to the market to change it—hence the name open market operations.

It must buy up those reserves until there is few enough of them. Then banks would have to pay more to borrow from each other, because there is less supply. This is how a rate hike works in practice, and the Fed is selling Treasurys and other securities to mop up reserves and reduce supply.

When the Fed sells Treasurys from the asset side of its balance sheet and buys up reserves (a liability) the balance sheet shrinks, reducing liquidity in the financial system.  This used to work wonderfully well before the age of quantitative easing.

Now there is a little problem.

In several rounds of quantitative easing, the Fed printed up so many reserves to buy Treasurys, there is now a big pile of excess reserves on top of the 10 percent required. This number is around $2.5 trillion.

Because these reserves are in excess of the required ones, the Fed first has to remove the excess in order to create enough scarcity to force banks to charge each other more for borrowing the required reserves.

On cue, the Fed’s trading desk announced it has $2 trillion worth of securities ready to push into the market to mop up excess reserves.

Of course, the Fed would never say it is reversing its QE program, which is permanent. Instead it will conduct so-called reverse repo operations, which are temporary—at least each individual transaction is.

The Fed would sell Treasury securities for excess reserves and repurchase the Treasury bill or bond two weeks later. Hence the word repo, which comes from repurchase.

This sounds nice because it means the Fed doesn’t have to permanently sell the assets on its balance sheet, which would mean the reversal of QE, which the market is so afraid of.

However, in order to achieve the desired effect on the Fed Fund Rate, it will have to roll the reverse repo operations as long as it wants to have the Fed Funds Rate higher, making them permanent in practice.

Wedbush Securities analyst E.D. Skyrm estimates the Fed will have to reverse repo (sell) about $800 billion to achieve the desired 0.25 rate hike. This is more than the $600 billion the Fed bought during its second round of quantitative easing.

So as much as the Fed wants to make us believe QE is permanent, it will have to permanently roll the reverse repos—or reverse QE—to keep rates from falling again.