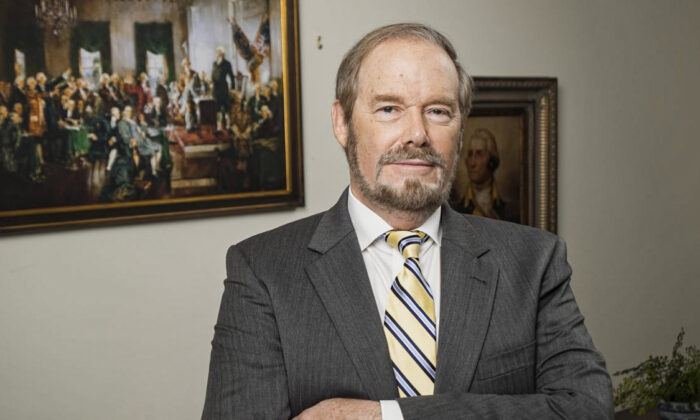 Steven Mosher, President of the Population Research Institute, founding member of the Committee on the Present Danger: China, in Washington on June 17, 2019. (York Du/NTD)
World

Certain elitists and the United Nations believe the world is overpopulated, and so population growth needs to be reduced. However, population control programs in many countries have used forcible methods, says Steven Mosher, president of the Population Research Institute.

In the view of billionaires such as Bill Gates, the world is overpopulated; notably, they believe there are too many poor people, Mosher said on EpochTV’s “Crossroads” program.

However, since the 1990s, the phenomenon of population collapse has been seen in industrialized nations in Europe, the Far East, North America, and Oceania. This means, Mosher said, that the population fertility rate is below the replacement rate of 2.1 children per woman, which a population needs in order to replace itself from one generation to the next.

“Over the last 25 years, that depopulation, that below-replacement fertility, has spread everywhere throughout the world,” he said. “Almost all the countries in the world now are having too few babies to replace themselves, with the exception of some countries in Africa.”

But Africa faces the problem of very high infant and child mortality rates, so African couples naturally want to have three to five children so that two or three of them will reach adulthood, Mosher said.

At that time, the birth rate in the United States dropped below the replacement fertility rate every year, with one exception when it claimed to be 2.1 in all racial groups, he said. However, it plummeted again after the outbreak of the COVID-19 pandemic.

Mosher hopes that with the overturning of Roe v. Wade, life will be respected again in about half of the states, and the birth rate will begin to come back up close to the replacement rate. Children are the only future that families, communities, and the nation have, he said.

“If you have too few children, you’re on a path to basically die out over time,” he said.

Since 1969, when the U.N. Population Fund was established, the foreign economic aid that wealthy, developed countries offered to poor countries has come with strings attached—namely aid recipient countries must have in place a population growth control program, often called population stabilization, Mosher said.

“Poor countries, which want the foreign aid to help them develop economically, have gone along with the program,” he said.

For example, the Kenyan government, because of foreign pressure, implemented a program with a goal to reduce the birth rate to 2.5 children by such means as legalized abortion and forced sterilization of women who had given birth to two or three children. The program includes a massive distribution of contraceptives, often abortifacient, which overturns the pro-life, pro-family mentality of the Kenyan people, Mosher said.

Since the inception of population control programs 50 years ago, birth rates in developing countries have declined dramatically. However, agencies promoting such programs have billions of dollars at their disposal, and tens of thousands of employees, and they won’t “fold up [their] tents and go home,” he said.

Even if a fertility rate goes down to 1.3 or 1.4 children, which means absolute population decline, they will continue their programs because the population controllers believe there’s no room on the earth for 7 billion people. They have said in their writings that the proper population of the world is about 1 billion, “which raises the question of what they’re going to do with the other 6 billion of us over time,” he said.

In 1974, the U.S. National Security Council produced “The Kissinger Report” (pdf), which analyzed the implications of world population growth. Henry Kissinger was secretary of state under Presidents Richard Nixon and Gerald Ford and is a lifetime trustee of The Trilateral Commission.

The report outlines a list of projected consequences of rapid population growth in developing countries, with the potential radicalization of these nations cited as a particular threat.

It states: “The young people, who are in much higher proportions in many LDCs [less-developed countries], are likely to be more volatile, unstable, prone to extremes, alienation and violence than an older population. These young people can more readily be persuaded to attack the legal institutions of the government or real property of the ‘establishment,’ ‘imperialists,’ [and] multinational corporations.

“Migrations into neighbouring countries (especially those richer or more sparsely settled), whether legal or illegal,” the report reads, “can provoke negative political reactions or force.”

Mosher said the institute he leads has documented coercive population control programs in about 40 countries.

For example, in Indonesia, the military hunts women who already have two children and take them in for mandatory sterilization.

“Vietnam went to a two-child policy, which was enforced by forced sterilization and forced abortion [but] many of the other countries didn’t go that far,” Mosher said.

A forced sterilization program introduced in Peru in the 1990s was tied to receiving foreign aid from the United States. As a result of this program 300,000 women were sterilized, he said.

Peruvian women who didn’t undergo sterilization and the children of those women were denied access to government-provided health care and food subsidy programs, Mosher said.

“Doctors and nurses in Peru were given quotas of women to bring in each month for sterilization, on pain of losing their jobs unless they complied,” he said.

The coerced sterilization targeted mostly the poor, indigenous population, not the descendants of Spanish colonizers of Peru.

In China, it’s women of the Tibetan and Uyghur ethnic minorities who are subjected to sterilization, not the Han Chinese population, which is the dominant ethnicity in China, Mosher said.

China led the way in population growth reduction with its one-child policy, a program that heavily used forced abortion, even at seven, eight, or nine months of gestation. This policy led to “a massive killing of baby girls before birth and after birth,” which caused a shortage of young women in China, as well as massive abuses in terms of forced sterilization, he said.

Despite the abuses, the U.N. Population Fund honored the head of China’s family planning program in 1983 with the highest award for achievements in population stabilization.

“They actually held up China as a model for other countries in the world,” Mosher said.

Mosher went to China in the 1980s, when he was a social scientist at Stanford University, as one of a group of 50 scholars—the first tranche of American scientists selected to go to China.

“The society that is normally closed to foreigners was uniquely, for a very short period of time, completely open to me,” he said.

Mosher was in China when its one-child policy began, and he followed women arrested by the Chinese regime for the crime of being pregnant with an illegal second, third, or fourth child.

Those women were taken to a camp where they were held for days and weeks, and subjected to “grueling propaganda and brainwashing sessions,” Mosher said.

Next, “they were taken to a local medical clinic, which had been turned into an abortuary for this period of time, and they were all given lethal injections into the womb to kill their unborn children.”

“As if that wasn’t enough pain and suffering, they were then sterilized. It was an assembly line of butchery,” said Mosher, who was present in an operating room and witnessed such procedures.

Babies of women who were already in labor when they arrived were killed with an injection of formaldehyde into the soft spot of the child’s skull, administered as soon as the baby’s head was crowning, Mosher said.

The Chinese regime couldn’t get local doctors to perform these procedures, so they had to bring in military doctors from the People’s Liberation Army (PLA) carry out the abortions, sterilizations, and killing of babies.

Over the years 1980 to 2016, when the one-child policy was in effect, 400 million abortions were performed “which means the 400 million unborn and sometimes newborn children were sacrificed,” Mosher said.

The Chinese Communist Party (CCP) ended the one-child policy in 2016, when a labor shortage in the country reached 4.1 million workers, he said.

However, the CCP hasn’t released its grip on the population growth; it reinstated the two-child policy that was in place prior to 1980.