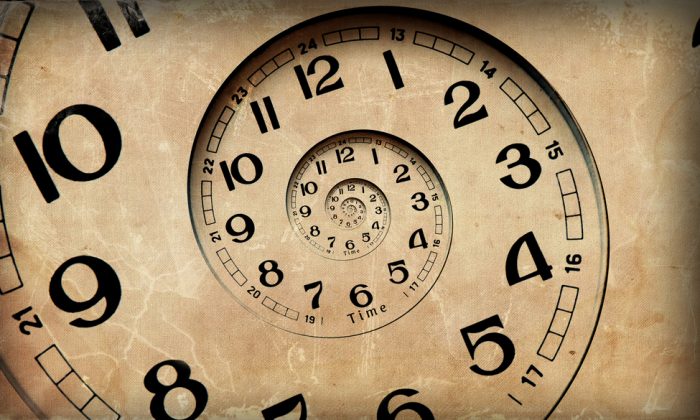 What Is Time? What Would the World Be Like Without It?

You can turn an egg into an omelet, but you can’t turn an omelet into an egg. Take a moment to ponder the implications of that in forming a definition of time.

Canadian musician Sam Roberts sings, “Time is a slippery fish.” The understanding of time is certainly hard to grasp. Philosophers and even linguists have as much right to define it as do physicists.

Here’s a look at some attempts to peg the concept of time (by no means a comprehensive list of such attempts), some fascinating facts about time as we understand it, and a look at the world without it.

Blame the Mess on Time

In the 1870s, Austrian physicist Ludwig Boltzmann associated time with disorder. Physicist Sean Carroll explained in a 2010 interview with Wired: “If you neatly stack papers on your desk, and you walk away, you’re not surprised they turn into a mess. You’d be very surprised if a mess turned into neatly stacked papers.

Image of a paper stack via Shutterstock

Albert Einstein envisioned space-time as a fourth dimension, as separate from our three-dimensional space.

The End of Time

Julian Barbour, PhD, an independent physicist and writer, thinks the next big step in physics could be the end of time.

“Unification of general relativity and quantum mechanics may well spell the end of time. … We shall come to see that time does not exist,” he wrote in his book “The End of Time.”

“No doubt many people will dismiss the suggestion that time may not exist as nonsense. I am not denying the powerful phenomenon we call time. But is it what it seems to be? After all, the Earth seems to be flat. I believe the true phenomenon is so different that, presented to you as I think it is without any mention of the word ‘time,’ it would not occur to you to call it that.”

He wrote: “At the personal level, thinking about these things has persuaded me that we should cherish the present. That certainly exists, and is perhaps even more wonderful than we realize. Carpe diem—seize the day.”

What would the world be like without time? “We shall not all suddenly feel that the flow of time has ceased,” wrote Dr. Barbour. “On the contrary, new timeless principles will explain why we do feel that time flows.”

“Now I think we must … go further, to a deeper reality in which nothing at all, neither heavens nor Earth, moves. Stillness reigns.”

What Role Does Perception Play? Are There Cultures That Don’t Have a Concept of Time?

Time doesn’t move the same for everybody, literally. If extremely precise clocks are placed at each level in a tall building, they will show that time moves slower on the lower floors than on the upper floors. The difference is minute, billionths of a second, according to a National Geographic report.

The perception of time could produce greater differences.

Amondawa Tribe Has No Word for ‘Time’

The Amondawa tribe of the Amazon have a unique perspective on time. They don’t have a concept of events being in the past or in the distant future. They have no word for “time,” nor do they have words for units of time, such as “month” or “year.”

“We’re really not saying these are a ‘people without time’ or ‘outside time,’” said Chris Sinha, a professor of psychology of language at the University of Portsmouth, England, in a 2011 interview with the BBC. “Amondawa people, like any other people, can talk about events and sequences of events.”

Linguist Benjamin Lee Whorf (1897-1941) was a great proponent of relative time. He wrote in “Science and Linguistics” that the Native American Hopi tribe’s language “may be called a timeless language. … [It] does not distinguish between present, past, and future of the event itself.”

Whorf’s claims were later disputed, but many linguists agreed the Hopi language treats time at least slightly differently than Indo-European languages do.

The Chinese do not have present, past, and future tenses, but they do have words to indicate time, such as “earlier,” and “later.” Linguists are divided on whether a person’s language stringently defines his or her thought patterns.

Do Africans See a Future?

Kenyan philosopher J.S. Mbiti, 82, has argued that the African understanding of time could negatively impact the continent’s progress.

He is quoted by Moses Òkè in Quest: An African Journal of Philosophy: “In traditional African thought, there is no concept of history moving ‘forward’ towards a future climax … So African peoples have no ‘belief in progress,’ the idea that the development of human activities and achievements moves from a low to a higher degree. The people neither plan for the future nor ‘build castles in the air.’”

Africans can understand the change of seasons and other such inevitable events, Mbiti said, but the thought of long-term planning or looking further into the future does not exist. He has said his ideas are incomplete and require further analysis, but he suggested that helping Africans understand the concept of future differently could help the continent’s development.

St. Augustine. Painted circa 1474 by Justus van Gent, currently at the Louvre Museum.

*Concept image of time via Shutterstock