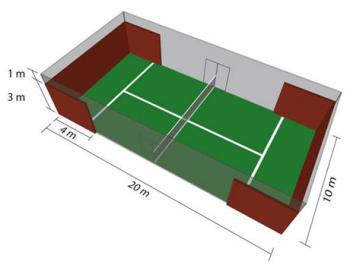 A paddle court and its dimensions. (Courtesy of 2008worldpaddle.com)
News

What is Paddle Tennis?

The Game: Paddle Tennis is always a doubles game that uses primarily tennis rules and the tennis scoring system with some adaptations such as an underhand serve. It’s played in an enclosed glass and metal court that allows for the use of side and back walls for rallies.

The Court: The court is rectangular in shape, measuring 10 meters wide by 20 meters long and divided in the middle by a normal tennis net. At the end of each court lies a “half box” shaped wall which measures 10 meters wide and 3 meters tall. It also has two side walls that are 4 meters wide and 3 meters tall. The remainder of the court is enclosed with 3-metre-high wire mesh. Three paddle courts can be placed in the same amount of surface area as a tennis court.

The Racket: Solid and made mostly of light, composite materials, the surface of a paddle tennis racket is perforated for lightness and allows for easier airflow. The face of the racket measures 26 x 29 cm (10 x 12 in) and is 45cm (18 in) long. The short paddle is easier to control than a longer stringed racket, thus allowing novices of all ages and skills to enjoy a well-paced game with plenty of rallies.

The Ball: The ball is a normal bright-yellow tennis ball.

The Rules: Like tennis, the serve begins from the right court into the opponent’s diagonal court. The server must allow the ball to bounce before hitting it and it must be hit below waste level, thereby creating an underhand serve. If the ball lands in the opponent’s court and hits the side or back walls it is considered legal and must be played. If it hits the mesh or metal posts, it is out.

The tennis scoring system is used and court lines are only considered during the serve. Points are lost to the opposing team when the ball:

The ball can be played off the back walls or the solid side walls before going over the net.