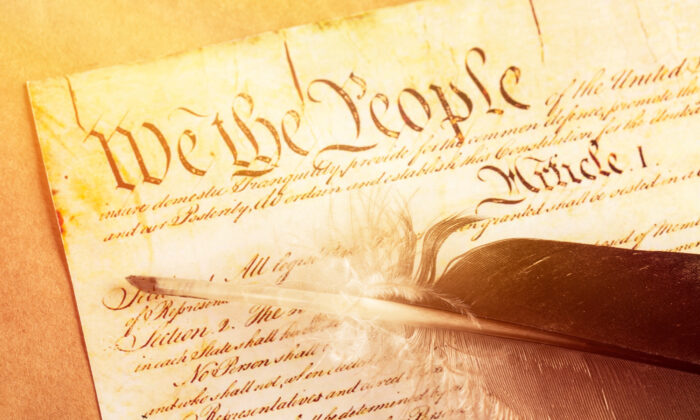 What If People Actually Controlled the Government?

Imagine, if you will, the following system.

Government is managed by elected representatives who are in turn elected by the people. Government is further restrained by checks and balances between three branches, each of which is accountable ultimately to the people who live under the laws.

Unlike the ancient system of government in which the only people who were truly free were the aristocracy, under this new system, every adult citizen has political rights. No one rules over anyone without accountability.

Also part of this, no one in government has a permanent job that is exempt from oversight. The laws and rules under which people live are not invented by faceless bureaucrats but rather by representatives with names who can be voted out.

In that way, we give the idea of freedom the best-possible hope.

Sounds dreamy? A bit. We haven’t had that system in the United States for a very long time, even if what I just mapped out seems more or less like what the U.S. Constitution set up.

There are two main reasons why we are so far from that ideal.

First, the U.S. system was supposed to exalt the juridical sovereignty of the “several states” so that the central government was of secondary importance.

Second, a fourth branch of government gradually came into existence. It is what we now call the administrative state. It consists of millions of employees with maximum power who answer to absolutely no one. The Federal Register lists 432 agencies that currently employ people who are beyond legislative reach but they still make policy and determine the structure of the regime under which we live. But we the people have no real control over them.

Not even the president can control them. This system was created with one piece of legislation in 1883 called the Pendleton Act. The New Deal exploited the new system. The administrative state even got its own constitution in 1946 called the Administrative Procedures Act. The 1984 Supreme Court decision in Chevron v. NRDC even entrenched deference to the agency’s interpretation of the law.

The result is something the Founders never imagined: hundreds of three-letter agencies exercising hegemonic control over the country. Everyone got to know this system well from 2020 as the CDC invented myriad rules on the spot that shut businesses and churches and even legislated how many people you could have in your home for a party.

This problem vexxed Donald Trump, who came to power with the promise to drain the swamp. He soon discovered that he could not because most federal employees were beyond his reach. Things got wildly out of hand after he made the enormous error of greenlighting lockdowns in a March 16, 2020 press conference. After that point and all the way until the election, his presidential powers slipped ever further as the administrative bureaucracy wielded power without precedent.

Two weeks before the election, the Trump administration innovated a solution. It was Executive Order 13957 that created a new category of federal employment called Schedule F. Any employee involved at any level in political making would be subject to presidential oversight. It makes sense: these are executive-level agencies so the president, because he bears responsibility for what they do, should have some personnel control over them.

This order was immediately reversed by Biden when he took office, leaving Schedule F a dead letter. The administrative state is once again safe from oversight.

Let us quote Trump’s executive order at length so that we can see the thinking here. Then we’ll deal with various objections. It reads as follows:

To effectively carry out the broad array of activities assigned to the executive branch under law, the President and his appointees must rely on men and women in the Federal service employed in positions of a confidential, policy-determining, policy-making, or policy-advocating character. Faithful execution of the law requires that the President have appropriate management oversight regarding this select cadre of professionals.

The Federal Government benefits from career professionals in positions that are not normally subject to change as a result of a Presidential transition but who discharge significant duties and exercise significant discretion in formulating and implementing executive branch policy and programs under the laws of the United States. The heads of executive departments and agencies (agencies) and the American people also entrust these career professionals with non‑public information that must be kept confidential…

Given the importance of the functions they discharge, employees in such positions must display appropriate temperament, acumen, impartiality, and sound judgment.

Due to these requirements, agencies should have a greater degree of appointment flexibility with respect to these employees than is afforded by the existing competitive service process.

Further, effective performance management of employees in confidential, policy-determining, policy-making, or policy-advocating positions is of the utmost importance. Unfortunately, the Government’s current performance management is inadequate, as recognized by Federal workers themselves. For instance, the 2016 Merit Principles Survey reveals that less than a quarter of Federal employees believe their agency addresses poor performers effectively.

Separating employees who cannot or will not meet required performance standards is important, and it is particularly important with regard to employees in confidential, policy-determining, policy-making, or policy-advocating positions. High performance by such employees can meaningfully enhance agency operations, while poor performance can significantly hinder them. Senior agency officials report that poor performance by career employees in policy-relevant positions has resulted in long delays and substandard-quality work for important agency projects, such as drafting and issuing regulations.

Pursuant to my authority under section 3302(1) of title 5, United States Code, I find that conditions of good administration make necessary an exception to the competitive hiring rules and examinations for career positions in the Federal service of a confidential, policy-determining, policy-making, or policy-advocating character. These conditions include the need to provide agency heads with additional flexibility to assess prospective appointees without the limitations imposed by competitive service selection procedures. Placing these positions in the excepted service will mitigate undue limitations on their selection. This action will also give agencies greater ability and discretion to assess critical qualities in applicants to fill these positions, such as work ethic, judgment, and ability to meet the particular needs of the agency. These are all qualities individuals should have before wielding the authority inherent in their prospective positions, and agencies should be able to assess candidates without proceeding through complicated and elaborate competitive service processes or rating procedures that do not necessarily reflect their particular needs.

Conditions of good administration similarly make necessary excepting such positions from the adverse action procedures set forth in chapter 75 of title 5, United States Code. Chapter 75 of title 5, United States Code, requires agencies to comply with extensive procedures before taking adverse action against an employee. These requirements can make removing poorly performing employees difficult. Only a quarter of Federal supervisors are confident that they could remove a poor performer. Career employees in confidential, policy-determining, policy‑making, and policy-advocating positions wield significant influence over Government operations and effectiveness. Agencies need the flexibility to expeditiously remove poorly performing employees from these positions without facing extensive delays or litigation.

Part of the order pushed an internal review of all agencies to reclassify employees, thus making them subject to normal standards of employment—the same ones that every person in the private sector adheres to.

Why is there resistance aside from the high-stakes effort to keep the current despotism in place? Let’s look at the sincere objections.

Schedule F would bring back the spoils system

The term itself is a smear of system in which the elected leadership can actually make a difference in public life. Are cronies hired? Yes. Are good people sometimes fired? Probably. But the alternative is dictatorship by the bureaucracy itself and that is what is truly intolerable. Instead of the “spoils system,” a state in which the elected leaders can enact policy by controlling personnel is called representative democracy. It is also the system the Constitution gave us.

Depends on what you mean by more power. More power over the bureaucracy, yes, but the driving motivation here was to emancipate power from being ruled by bureaucrats that he could not control. It was also designed to stop the bureaucracy from working directly with the media to undermine through lies and smears the work of the administration. In words, elected leaders absolutely do need more power over the deep state.

This would gut government of expertise

There is this strange presumption that educational credentials and a permanent job equals expertise plus good outcomes. That is very obviously untrue. Good outcomes come from basic competence and a work ethic. Those are in short supply in government precisely because the turnover rate is less than zero, unlike the private sector. Anyone who has worked in a federal agency knows this. The best way to unleash genuine expertise is through normal job accountability.

Presidents would use this to politicize the bureaucracy

This is a decent point but the bureaucracy is already heavily politicized, and always in the direction of policies that push more power and money toward the government. Everyone knows this. Is there a danger that a radically and dangerous president would press bureaucrats into even further politicization? Yes, but there is an easy solution to this one: cut the reach and power of the agencies themselves, consistent with the Constitution. Finally—a crucial point—elected leaders could override the influence of private industry which has captured their operations.

Bureaucracies would get around this by minimizing Schedule F designations

They would certainly attempt this but that would require that employees refrain from “policy-determining, policy-making, or policy-advocating positions.” That would be very great! If they eschewed Schedule F and did that anyway, the Office of Personnel Management could hunt them down and the agency itself would be responsible for illegal actions.

There are surely some downsides to the system as Trump imagined it but all of them trace to the inflated powers of the federal government itself. Yes, a vastly ambitious government machinery will always need bureaucracies and they will always have problems with waste, abuse, and unneeded exercise of power. Perhaps, then, the best long-term effect of Schedule F would be to inspire a rethinking of government’s role in a free society.

It seems remarkable that the executive order creating Schedule F was issued at all. It needs to be pressed upon any future reformers as a path to revisit, ideally with legislative support. Until that time, there will continue to be the grave problem that our elected officials are positioned to be little more than dancing marionettes while the administrative state wields all the real power.