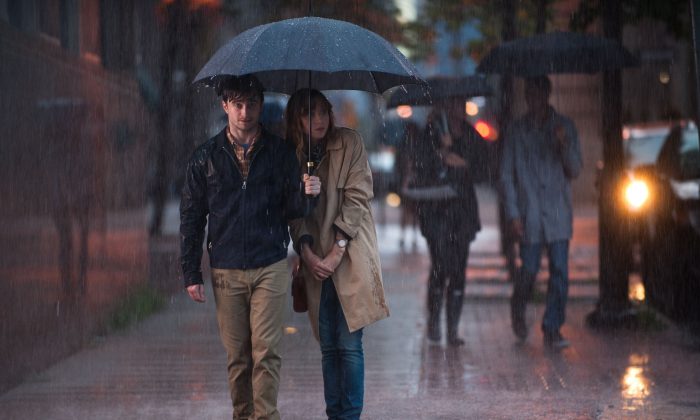 Wallace (Daniel Radcliffe) and Chantry (Zoe Kazan) are stuck somewhere between friends and lovers in “What If.” (Caitlin Cronenberg/CBS Films)
Entertainment

‘What If’: Cute Banter Does Not a Make Romance

Can men and women ever be “just friends”? Didn’t we already answer that in the negative in “When Harry Met Sally”? In “What If,” director Michael Dowse modifies the question slightly: What if the love of your life is actually your best friend?

Wallace (Daniel Radcliffe) is a medical school dropout who, at a house party, finds himself in the presence of kitten-eyed Chantry (Zoe Kazan). Keeping the refrigerator company, they immediately start (rather too eloquently) sputtering about how socially awkward they are. He corrects her pronunciation of “forte.” Then there are loaded glances. It must be attraction.

Meanwhile, Wallace’s college roommate Allan (Adam Driver) and his new friend Nicole (Mackenzie Davis) have created an oral vacuum seal. In the background, their locked bodies collide onto a couch. Fast or slow, everyone hits it off.

Wallace walks Chantry to her house. At the door, Chantry casually mentions that she has a boyfriend. Thus begins Wallace’s long, hollow-eyed walk of yearning that is the bulk of the movie. That is, until life forces him to make some bold moves.

“What If” is essentially a Toronto hipster version of “When Harry Met Sally.” If you liked that, you’ll mildly like this. While “WHMS” packed on the one-liners and kept the action moving, “What If” obligatorily injects melodrama where more character development could have been. While it’s not an unenjoyable film, very little sticks with you.

There are three relationships in this movie: Chantry and boyfriend Ben (Rafe Spall), Chantry and Wallace, and Allan and Nicole. Of the three, only the latter is fun, believable, or relatable.

Those two are completely synced in their reckless joie de vivre, possess an unearthly sex drive, and never seem to be weighed down by grown-up realities. Haven’t we all known a couple like that?

Allan and Nicole are immensely enjoyable in their limited time on-screen. They make us want to take a dip in their impulsive, irreverent world. But no, we’re stuck watching Wallace and Chantry inch painfully toward a confession.

And what exactly is Wallace and Chantry’s relationship based on?

They bond mostly over Fool’s Gold, a disgustingly rich, bacon-filled sandwich that contributed to Elvis’s death. Wallace and Chantry dwell on this sandwich a little too much. But an obsession over intriguing food items is a necessary part of youth culture, so we’ll go with it, even though we wonder the whole time whether “Fool’s Gold” is meant as a foreboding metaphor for this newfound romance.

The most telling quote in the whole movie is, “Love is complicated, which is good because if it were simple, you’ve got no reason to try.”

The reason for Wallace to try is that Chantry is taken. The problem is, her boyfriend Ben has so little presence in the movie that his existence might as well be a rumor. He comes off as such a lunatic in his first appearance (threatening newly acquainted Wallace with a kitchen knife) that, thereafter, he is nothing more than a caricature. The writer gives him a job as an international lawyer, but that doesn’t add much.

As for Chantry, we understand that she works as an animator. But she seems interested in her career only because it might force her away from what’s familiar. It’s hard to root for a girl with so little gumption.

Overall, the performances are good despite the writing. Radcliffe gives a fair performance in his first romantic comedy. His big, haunted blue eyes certainly give him a luckless look. He makes cute banter. That he banters in his British accent also helps.

So here’s a “what if” for Michael Dowse—what if there were a film about two perfectly dateable people who share a deep bond and absolutely, unambiguously stay friends? After all, we hear that adult friendships are in crises these days, so clearly the topic needs exploration.