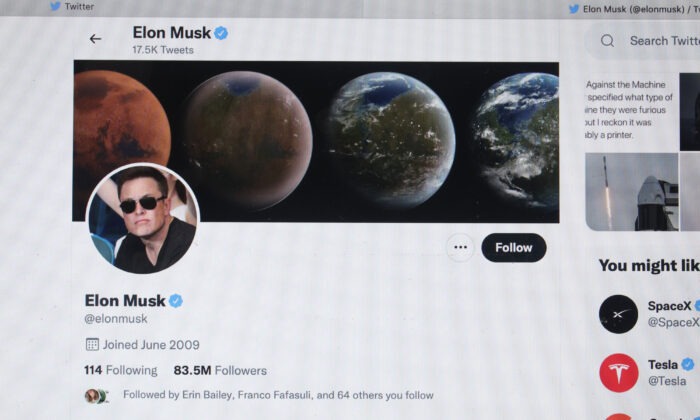 The Twitter profile of Elon Musk with more than 80 million followers is shown on a computer in Chicago on April 25, 2022. (Illustration by Scott Olson/Getty Images)
Media & Big Tech

What Elon Musk’s Twitter Deal Says About His Wealth

Elon Musk has finalized a deal to buy social media platform Twitter Inc. with a financing plan that includes commitments from bankers and himself.

The U.S. tax code could be working hand in glove with Tesla Inc. CEO Musk in tallying up the deal amount, Bloomberg said in a report.

The Tesla CEO has agreed to bring in $21 billion in equity financing and will take a $12.5-billion loan, pledging his Tesla shares as collateral. This is in addition to the $13.5 billion debt financing commitments from banks led by Morgan Stanley.

Musk’s income, as defined by the tax code, does not make him rich enough to buy Twitter, Steve Wamhoff of the Institute on Taxation and Economic Policy reportedly said.

Only when the parts that are not included as taxable income under the U.S. tax rules are accounted for does it become clear as to how Musk can buy Twitter, he added.

If the need arises, Musk may not have to sell his stock but pledge it as a collateral to secure a loan, thereby evading taxes.

Musk and other billionaires have of late come under increasing scrutiny for not adequately paying taxes. The Tesla CEO doesn’t take a salary or a cash bonus but is paid in stock awards. Stock awards become taxable only when options are exercised.

Musk is expected to have footed a hefty tax bill of $11 billion for 2021. He sold about $14 billion worth of Tesla stock after his question on Twitter as to whether he should sell 10 percent of his Tesla stock elicited a strong positive response.

The sale may have been precipitated by his 2012 stock awards expiring by August 2022 and the need to pay taxes on the gains when the options are exercised.

Democrats are pushing for enacting a billionaire tax that envisages taxing appreciation of financial and business assets owned by people with a net worth of more than $100 million. The intention is to generate billions of dollars of new revenue from the rich, who use the loophole in the tax laws to lower their tax payments.

Democratic Sen. Elizabeth Warren used the Musk-Twitter development to renew calls for a wealth tax. Calling the Twitter deal dangerous, the senator said: “Billionaires like Elon Musk play by a different set of rules than everyone else, accumulating power for their own gain.”

She argued for a wealth tax and strong rules to hold big techs accountable.