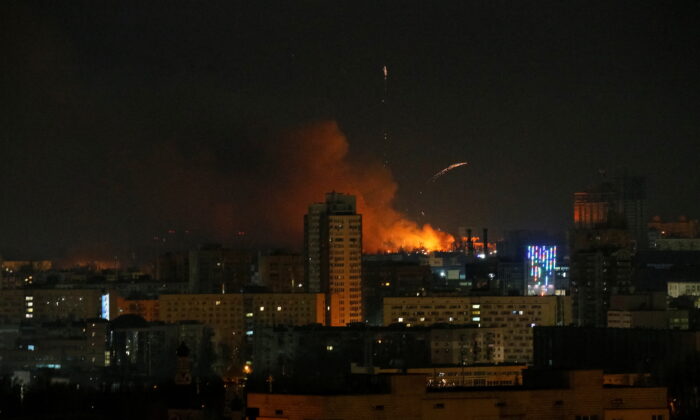 Smoke and flames rise over during the shelling near Kyiv, as Russia continues its invasion of Ukraine, on Feb. 26, 2022. (Gleb Garanich/Reuters)
Thinking About China

What Does China Seek in the Ukraine Crisis?

China is engaged in a high-wire balancing act with respect to the Russian invasion of Ukraine, which includes providing moral support to its ally Russia, expanding lucrative bilateral trade with Ukraine, and retaining diplomatic credibility with the rest of the world.

Will the Chinese Communist Party (CCP) be able to achieve its self-serving objectives?

At first glance, Russia and China are allies according to the joint statement announced to the world made on Feb. 4, titled “Joint Statement of the Russian Federation and the People’s Republic of China on the International Relations Entering a New Era and the Global Sustainable Development.”

The joint statement conveys their joint opposition to “further enlargement of NATO” and “color revolutions.” Although unnamed, that is a direct reference to Ukraine, as Ukraine is seeking NATO membership and incurred its own color revolution in 2014.

Russia would thus expect some degree of geopolitical and diplomatic support from China for its invasion of Ukraine. Chinese support has manifested in abstaining from the United Nations Security Council resolution condemning Russia’s invasion of Ukraine. Russia vetoed it, of course, while 11 countries voted in support and only two other countries abstained: India and the United Arab Emirates. Other de facto Chinese support involves not condemning Russia’s aggression in official diplomatic statements. This provides the Russians with some geopolitical “top cover” moving forward.

Here are a few recent headlines from official Chinese media about Ukraine:

No chastising of Russia, focusing only on dialog, negotiation, and “peace.” No suggestion of sanctions that should be applied to Russia. In fact, one editorial downplays one sanction action in play by arguing that the SWIFT sanctions implemented by the European Union are essentially meaningless. (SWIFT: Society for Worldwide Interbank Financial Telecommunication.)

Why would Beijing be as seemingly noncommittal in supporting Moscow’s “Ukraine adventure” as it has been up to this point?

Because the CCP has a number of geopolitical and economic objectives in Ukraine that complicate its decision-making process.

One motivation for the equanimity being projected by Beijing during this crisis is the CCP’s goal to displace U.S. leadership on the world stage. It is no secret that Chinese leader Xi Jinping seeks to implement a CCP-dominated “new world order” centered around Beijing’s leadership in all spheres of human endeavors.

Xi is continuously promoted as a world leader by state-run media and the diplomatic corps, while undermining the United States by pushing for a bipolar world and multilateral solutions for problems. U.S. democracy and alliances are criticized at every opportunity as part of the ongoing CCP information warfare aimed at undermining the present U.S.-backed international order.

The CCP seeks to exploit the Russo-Ukrainian war to demonstrate Chinese leadership in helping to resolve the conflict. This task is made easier by the absence of aggressive U.S. leadership under the Biden administration at this point.

A principal CCP economic objective is to maintain Ukraine as a key entry point to Europe and a logistics hub for China’s Belt and Road Initiative (BRI, also known as “One Belt, One Road”). Unbeknownst to many Americans, China has displaced Russia as Ukraine’s top trading partner since 2019. Trade between China and Ukraine has reached $15.4 billion in 2020 and nearly $19 billion in 2021, according to the Ukrainian government’s customs data.

China also has its sights squarely focused on accessing Ukraine’s abundant natural resources. Ukraine has an estimated 5 percent of all of the world’s mineral resources and is the world’s third-largest exporter of iron ore, fourth in titanium exports (largest deposits in Europe), fourth in corn exports, eighth in wheat exports, seventh largest in coal production, and among the top 10 in producing manganese. China does not want the Russo-Ukrainian war to interrupt bilateral trade with Ukraine!

Their bilateral trade reached $104 billion in 2020, and Russia will be increasingly pushed to expand that trade as EU and U.S. sanctions begin to take effect. The big question is whether resource-poor China would choose to violate those sanctions in order to increase the importation of Russian hydrocarbons and other natural resources.

Consider that China is a known currency manipulator. If the yuan ever replaces the dollar as the primary reserve currency and the standard for trading oil, then the CCP will gain enormous geopolitical and economic leverage over the entire world.

With SWIFT-related sanctions being imposed on the Russian Central Bank and other Russian banks, Russia may be pushed to export oil and gas under China’s Cross-Border International Payments System (CLIPS), as Asia Times speculated on Feb. 25. If Russia shifts to the CLIPS lifeline, “the decoupling of Russia and China from the US dollar would be accelerated. Both countries are already working on competing payment systems.” That amounts to “de-dollarization” and a shift to the yuan—exactly in line with Beijing’s goal.

China has complex and intertwined geopolitical and economic goals associated with the ongoing Russo-Ukrainian war. Although China and Russia are allies and significant trade partners, the Russian invasion of Ukraine is disrupting the world’s oil and gas markets and Ukrainian-Chinese trade. Energy-poor China seeks stable supplies of hydrocarbons from Russia that could be disrupted by U.S. and EU sanctions on Russian gas and oil exports.

Finally, Russian aggression is strengthening NATO/EU integration, fortitude, and resolve. And that newly found fortitude and resolve are the last things that the CCP wants to see coalesce as it contemplates the cost-benefits of a cross-channel amphibious assault of Taiwan.

How will the CCP balance these competing interests in pursuit of its national objectives while preserving the “domestic stability” it so highly prizes? That ultimate objective may elude the communists.