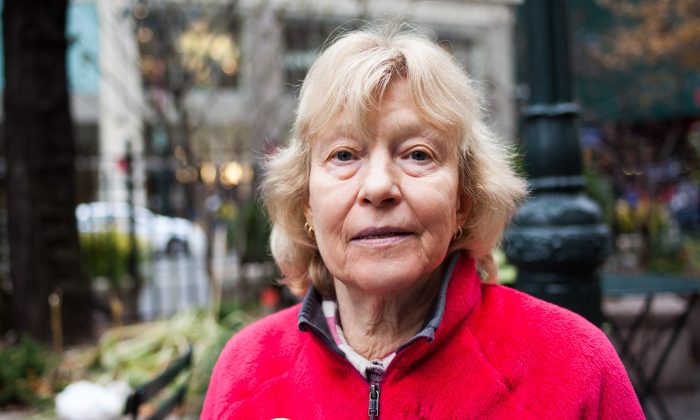 What Do You Need to Know to Fly a Drone?

NEW YORK—Two weeks ago, after Eva-Lee Baird, 74, marched in the peace contingent of the Veterans Day Parade in New York City, an old friend sent her a picture dating back almost 50 years. It was her younger self pushing a stroller in a 1965 peace march. The photograph brought back memories—as if Baird’s life had come full circle.

When Baird, a Manhattanite, retired from teaching art at public schools in 2005, she decided to take her interest in activism to a new level. If the peace marches taught her anything, it was that they had to be done, however “difficult and hopeless and useless” they seemed.

Together with some 30 retired New York women, she formed the Granny Peace Brigade. In a sense, the group returned her to the fundamentals of her youth activism, as the first issue they took on was criticizing the U.S.’s foreign military presence they deemed unnecessary, such as military bases in South America.

But the scope developed over the years, and the group started to get increasingly concerned about drones. The unmanned aircraft are so new that regulations to protect the public have not yet had a chance to develop.

With law enforcement agencies increasingly moving in the direction of using the technology, Baird asked herself a simple question: What prevents the public, or the government here in the United States, from mounting guns or spying equipment on drones?

The answer is anything but simple.

Flying for recreation or as a hobby is allowed, according to a Federal Aviation Administration (FAA) Modernization and Reform Act passed by Congress in 2012. Anyone can fly a small drone for fun as long as one obeys some safety precautions.

All other drone flights, including those for commercial purposes, are grounded until the FAA develops new rules for them. The rules are drafted already and will be released for public comment possibly in a month or two, but they may not come into effect for as long as two years.

Filmmaker Raphael Pirker tried to challenge the rules after getting a $10,000 fine from the FAA for flying a drone to shoot a commercial for the University of Virginia in 2011. An administrative law judge dismissed the fine earlier this year, but two weeks ago the FAA successfully appealed the decision.

Thus the commercial use of drones was once again blocked.

But there are some loose ends. The 2012 congressional act allows law enforcement agencies to use very small drones, under 4.4 pounds, with the same simple rules that apply to hobbyists.

Moreover, law enforcement can ask the FAA for permission to use even larger drones. Police are free to mount whatever equipment they see fit on to the drone to use for any purpose, as long as they meet certain safety rules. The grannies feel these could be used for nefarious purposes.

Law enforcement agencies in some 16 states either applied for permission, or have borrowed drones from Customs and Border Protection, according to 2013 data obtained by the Electronic Frontier Foundation.

Ultimately, the FAA can also issue exemptions for public commercial use of drones. About 120 entities have applied so far, according to the Association for Unmanned Vehicle Systems International (AUVSI).

The public is not allowed to mount guns on its drones, but cameras and microphones are some of the most sought-after features of drones, and these are allowed.

There are no laws, at least at the federal level that would regulate privacy, such as from recording a neighbor’s backyard barbecue, to police using drones to monitor protests.

While some people may fear that swarms of camera-geared drones are about to descend upon us, with police drones even about to inflict bodily harm, there are barriers in place.

The FAA has issued only seven permits for commercial drone use—all to the movie industry where they should be operated on closed sets. A chunk of the 120 applicants are drone makers seeking to legally test their products.

While law enforcement agencies are not banned from arming their drones, it is “strongly discouraged,” according to 2012 recommended guidelines by the International Association of Chiefs of Police. “[P]ublic acceptance of airborne use of force is … doubtful and could result in unnecessary community resistance,” the document states.

Meanwhile, individual states are stepping in to regulate drone use. Ten have passed legislation, and 25 more have introduced bills—including New York, according to the American Civil Liberties Union.

Most of the bills seek to prevent police from using drones to spy on people without a warrant or suspicion of criminal activity.

Finally, the technology, in its affordable form, has not been widely adopted for such purposes. It is still too clumsy to replace conventional surveillance tools, such as security cameras.

For all the worrying about privacy and safety, the routine use of drones is not quite ready for most of the questionable activities currently permitted by laws. That is, if people actually obey the law.

In the past year there have been several incidents where drones caused safety hazards. Last week three pilots reported seeing a drone very close to their aircraft, while approaching JFT Airport. FAA registered 23 accidents involving drones and 236 incidents deemed “unsafe” since 2009.

And the situation may soon get more complicated. The FAA is expected to issue dozens of commercial permits to drone developers in the near future. That may speed up innovation and push down prices.

State legislators may also want to wait for the new FAA rules before addressing privacy concerns, pushing the measures years into the future.

Baird with the Granny Peace Brigade tries to work at the local level. She has asked the New York City Council to declare the city a No Weaponized and Surveillance Drone Zone.

So far there hasn’t been much success.

Council member Andy King took up the issue, but his resolution is far from being passed, and it only supports a state bill that is also far from passing.

Besides, the state bill doesn’t go far enough for Baird, as it only demands court-issued warrants for police use of drones.

Baird is not discouraged though. She is used to seemingly impossible causes. After all, she’s been fighting for them for half a century.