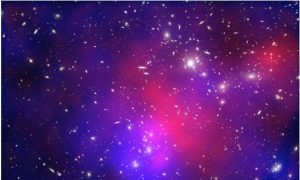 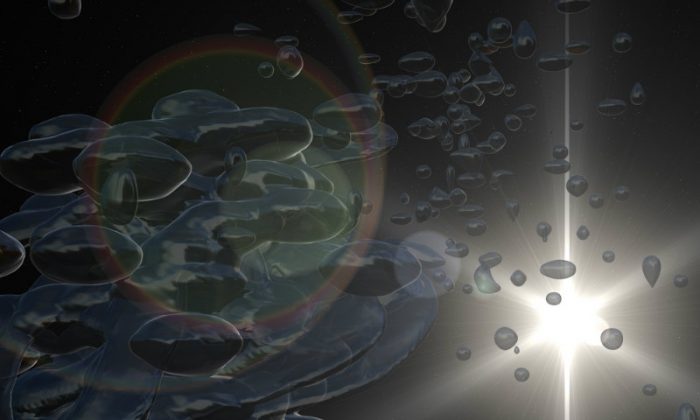 A concept illustration of dark matter, a substance scientists have not been able to see, but which they know is there because of its affect on other substances. (Shutterstock*)
Beyond Science

What Are the Chances of Finding Aliens in Dark Matter, Black Holes?

The questions of whether extraterrestrial life exists and in what forms or under what conditions it may exist are wide open to speculation.

The nature of dark matter and black holes is also a mystery.

Even if it’s completely hypothetical at this point, it’s fun to ponder the likelihood of finding extraterrestrial life in these mysterious parts of the universe. Here’s a look at why we may find aliens in dark matter or black holes.

Scientists don’t know what dark matter is, though it is estimated to make up 25 percent of the known universe. One popular theory holds that it is made up of a different kind of particles, which destroy each other when they collide and release energy in the process.

This energy could warm planets within the dark matter, creating conditions conducive to life, according to physicist Dan Hooper and astrophysicist Jason Steffen at the Fermi National Accelerator Laboratory.

Dark matter would have to be present in very high density to provide substantial warmth. So, although dark matter is so ubiquitous, it would not likely create conditions for life on a large scale, explained Hooper in a 2011 interview with Space.com.

“We are talking about rare and special environments, but not implausible ones,” Hooper said. “You can have all the basic elements you need for organic life without a star.”

The dark matter could keep a planet warm for trillions of years, whereas stars the size of our sun die after about 10 million years.

‘Black Holes May Be Inhabited by Advanced Civilizations’

A concept illustration of a black hole and a planet. (Thinkstock)

Professor Vyacheslav Dokuchaev at the Russian Academy of Sciences in Moscow came up with an unusual theory about black holes, published in the Journal of Cosmology and Astroparticle Physics in 2011 and available on the Cornell University database arXiv.org. It is commonly held that any object that enters a black hole will be torn apart or crushed by the forces therein.

Planets could exist in black holes, and if they do, there are some places within the black holes that may be conducive to life, according to Dokuchaev’s calculations as described by Discovery News. In such places, particles and planets may have stable orbits, though their orbits would be unusual.

These planets could be warmed by photons in the same orbit and by the singularity thought to be at the center of a black hole. A singularity is said to be something very small and very powerful, but scientists don’t know much more about it than that. The photons and singularity would give life as a sun does.

Dokuchaev wrote: “A supermassive black hole is not the best place to live. However, there are physicists who consider the possibility of life existing in such extreme places and probably already inhabited by some most advanced races—super aliens.”

Stuart Gary, a broadcaster on Australia’s ABC Newsradio, described Dokuchaev’s theory in an article posted by Discovery News: “The idea is far-fetched, and possibly flawed, but it does raise philosophical questions.”

He asked another astronomer what to make of Dokuchaev’s theory. Dr. David Floyd from the Australian Astronomical Observatory and the University of Melbourne told Gary other conditions in a black hole could interfere with Dokuchaev’s theory, but “Given the number of black holes in the universe—lots—one might infer that life is inevitable inside at least one of them if there really are stable orbits. …Maybe there are entire universes inside black holes.”