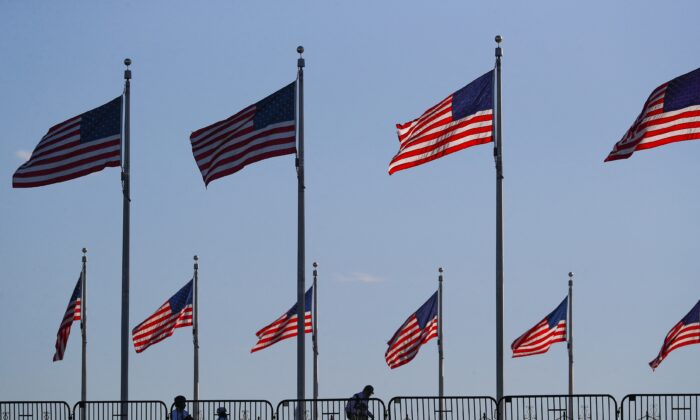 People walk beneath U.S. flags surrounding the Washington monument on the National Mall near the White House in Washington on Nov. 10, 2020. (Tom Brenner/Reuters)
Viewpoints

What Americans Should Expect of Their Leaders

In a time of ideological upheaval and the threat from China, Americans face acute perils to their lives, livelihoods, traditions, inheritance from the previous generations of Americans, and obligations to future generations.

At this time of considerable menace, Americans have a right to expect the following minimal standards from their leaders.

Second, Americans should expect actual leadership to provide honest identification of problems and answers to them. American leaders should provide positive solutions to inflation, the health and well-being of all Americans, most particularly America’s working and middle classes, those who perished or whose lives were disrupted by the forgotten opioid epidemic, by COVID-19, and by immigration. Leadership also means devising a solution to protect Americans and American interests from the Chinese regime and the other threats that endanger American lives and prosperity.

Third, Americans should expect that their leaders are invested in America’s future. They do not saddle future generations with debt or reduced opportunity, they should not seek to separate the American people from their history and culture, and they do not provide succor to America’s enemies who will rob Americans’ of their future, liberty, and birthright. American leaders should ensure that future Americans have greater opportunities than Americans have at present or in the past.

Fourth, it is painful to state what would have been unthinkable to previous generations of American leaders: American leaders and their families should not profit directly or indirectly from investments in communist China, the enemy of the American people. The fact that American leaders do profit is evidence of a far more significant problem than venality, but of how far our leaders have fallen—directly put: it shows just how bad they are, and what a profound problem Americans have.

Additionally, that American leadership permits the Chinese regime’s presence on American financial markets is beyond scandal and reaches deep into treachery. Investment that could be going to strengthen America’s development of 6G and beyond technology or artificial intelligence, bioscience, education, manufacturing, ship building, or infrastructure improvement, is instead going to strengthen the Chinese regime, the Chinese military, a brighter future for totalitarian rule in China, and creating a more formidable enemy for the American people. Those who invest in China may receive more lucre, perhaps another house, at the cost of their children’s and all American’s birthright.

Fifth, Americans should expect that American leaders do not generate strategic vulnerabilities for the United States and the American people by manufacturing strategic goods like antibiotics, medicines, medical equipment, and personal protective equipment in China. Or by selling American soil to the Chinese regime’s investors. Or by permitting China to siphon off technology from U.S. firms in exchange for access to the Chinese market.

Any pretension to be universal or global in outlook or interest will be shattered by Beijing, should it be successful in creating a new international economic order to replace the liberal international one. In the Sino-American struggle, business and cultural leaders will support either the Chinese regime or the United States. Which side are you on should be asked of every corporate leader, venture capitalist, and Hollywood star on American soil.

Sixth, Americans should discuss how their leaders failed them so badly, and how they can find better ones. Where will the American people find men and women who inspire Americans, understand their difficulties, and provide answers to present and future problems that do not involve transforming America into a socialist, neo-totalitarian state, or an owned subsidiary of China? Beyond a handful of prominent individuals, where are the American leaders who will strengthen the country rather than weaken it? Leaders who will provide answers in accord with American political culture and practices, offer support for them, and seek to strengthen them. Leaders who do not profit from trade with America’s enemy, or permit the enemy to use American investment and resources to become a greater threat while denying that investment to Americans to strengthen America.

In the wake of the June 1953 uprising against the tyranny of the East German government and Soviet occupation, Bertolt Brecht wrote in his poem “The Solution,” “Would it not be easier in that case for the government to disband the people and elect another?”

As a thought experiment, what if Americans could fire their leaders—if they could replace their political, economic, technological, media, and cultural leaders as easily as immigrants now cross the southern border? What if decades ago American leaders had perceived the nature of the Chinese regime and had worked to combat it rather than welcoming it into the West’s economic, political, and technological ecosystems? What if Americans could replace the NBA’s leadership with Enes Kanter Freedom? What if Hollywood made films about the Muslim genocide in China, oppression in Tibet, a Chinese official who denounced the racism and sexism of the Chinese regime, or a heroic Rosa Parks figure, who starts a civil rights movement in China?

Cursed with the leadership they have had, the American people have been extraordinarily resilient, but they deserve and need to have far better leadership to face the challenges of the 21st century.