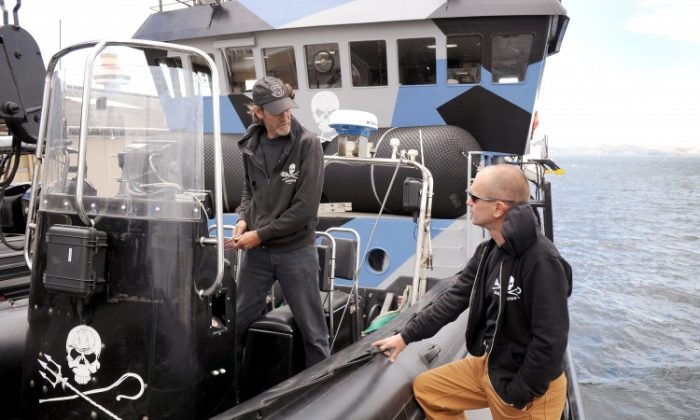 A stock photo of Sea Shepherd Conservation Society environmentalists in Hobart, Australia on Dec. 13, 2011. Sea Shepherd vessels prevented the refueling of a Japanese whaling fleet on Wednesday that has effectively halted the hunt for the rest of the season. (William West/AFP/Getty Images)
World

The Sun Laurel, a refueling vessel for the Japanese whaling fleet, rammed vessels operated by Sea Shepherd Conservation Society on Wednesday as Sea Shepherd attempted to stop the whaling ship’s refueling operations in the Antarctic.

Sea Shepherd says the whaling ship was illegally refueling, as it is prohibited from doing so in an area lower than 60 degrees south according to the Antarctic Treaty, reported The Australian. After the confrontation, Sea Shepherd Captain Jim Watson told The Australian it is unlikely the whalers will return to finish the last 18 days of the season. The whaling fleet will likely refuel 300 nautical miles further north.

Sea Shepherd reported on Feb. 17 that the crew on one of its vessels, Sam Simon, smelled diesel fumes and saw an oil slick in the wake of the Sun Laurel. It took samples of the water.

The group was able to halt hunting for the day, but now it is hopeful the hunt will not continue for the rest of the season, and that the whalers will be discouraged front continuing next season.