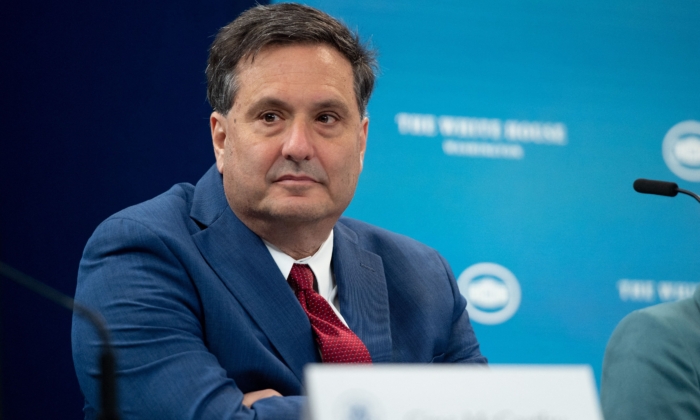 WH Chief of Staff: ‘I Don’t Know If We’ll Ever Recognize’ a Taliban Government

White House chief of staff Ron Klain said on Aug. 31 that he wasn’t sure if the United States would ever recognize the Taliban as the legitimate government of Afghanistan.

“I don’t think anytime soon. I don’t know if we’ll ever recognize their government,” Klain said on the “The Mehdi Hasan Show.”

“What we know is that the Taliban says they’re going to form a government. We’ll see what that looks like. We’ll see what kind of credentials they present. More importantly, we’ll see what their conduct is. Do they honor their commitments to allow freedom of travel? Do they respect human rights? I think the question of recognizing a new government of Afghanistan is down the road here.”

No nation has formally recognized the Taliban after it came into power in Afghanistan via a rapid military blitz in mid-August.

In the days leading up to the takeover of Afghanistan, U.S. Secretary of State Antony Blinken suggested that the United States could recognize the Taliban government.

“A future Afghan government that upholds the basic rights of its people and that doesn’t harbor terrorists is a government we can work with and recognize,” Blinken told CNN on Aug. 15.

“Conversely, a government that doesn’t do that, that doesn’t uphold the basic rights of its people, including women and girls, that harbors terrorist groups that have designs on the United States, our allies and partners, certainly, that’s not going to happen.”

Blinken said on Aug. 30 that the Taliban would have to earn recognition, including by respecting freedom of travel, respecting basic human rights, and upholding commitments on counterterrorism.

“If we can work with a new Afghan government in a way that helps secure those interests—including the safe return of Mark Frerichs, a U.S. citizen who has been held hostage in the region since early last year—and in a way that brings greater stability to the country and region and protects the gains of the past two decades, we will do it,” Blinken said.

“But we will not do it on the basis of trust or faith. Every step we take will be based not on what a Taliban-led government says, but what it does to live up to its commitments.”

The last U.S. soldier departed Afghanistan on Aug. 30, marking the end of a nearly 20-year-long war that began in the aftermath of the 9/11 attacks. The administration of President Joe Biden has faced bipartisan criticism over the chaotic evacuation effort that followed the Taliban’s takeover. Biden defended the withdrawal in remarks delivered on Aug. 31.

“I give you my word: With all of my heart, I believe this is the right decision, a wise decision, and the best decision for America,” he said.