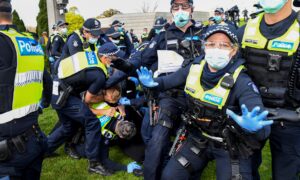 The Hornsby Westfield Cinema roof collapsed and the Westfield Hornsby shopping center in Sydney was evacuated amid high winds and a “mini tornado.”

That’s what witnesses described after a frightening storm rolled through on Monday.

“It was like a cyclone. It ripped the roof off the building opposite the library. There’s stuff everywhere,” Kean said.

The Herald Sun reported that the roof of the cinema at the center was ripped off, and there are lots of trees and phone lines down.

There aren’t any injuries reported as of yet.

The “mini tornado” is being described as a “freak storm,” which left cars overturned and 15 injured.

A search and rescue operation was launched as some people are missing., but everyone has turned up safe, the Fire & Rescue NSW said via Twitter.