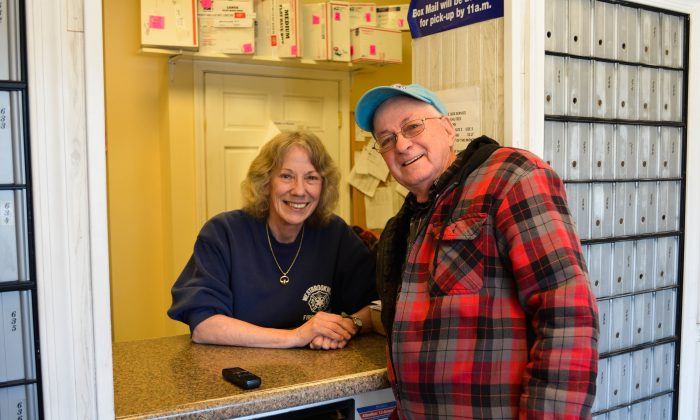 WESTBROOKVILLE—The efforts of residents and local officials came to fruition when Marlene Roe, postmistress of the Westbrookville Post Office,  received a phone call from Port Jervis Postmaster Bob Maskara on March 21. He said that the post office will remain open.

Although nothing is officially in writing yet, Roe says a federal employee will run the operation until a bid is submitted and accepted. A bidder may also run the post office until a successful bidder is approved for the full contract. Roe said several individuals have expressed an interest in taking up the contract.

The announcement is a hard-won victory for local officials and for landlord and Bloomingberg attorney Marcelle Matthews who “has fought relentlessly to keep it open,” Roe said. Matthews wrote to the Postal Regulatory Commission in Washington to plead the case.

Everybody is on board.
— Marlene Row, postmaster of Westbrookville post office, on keeping it open

“Now they are all trying to help. Everybody is on board,” Roe said. State Assemblyman Karl Brabenec attended a meeting of residents on March 18 and claimed to have received a letter which states the post office will remain open. He did not say who the letter was from. Mamakating councilwoman Brenda Giraldi, who lives in Westbrookville and has a post office box, got Brabenec involved.

Owning a post office franchise is similar to being a sole proprietor. Roe says she receives one contracted amount to pay all her expenses. “It is my responsibility to pay the rent, the lights, the heat, the repairs, the telephone. Out of that you get your own salary.”

There are no days off. “It is a six-day-a-week job, you get no paid holidays, there are no sick days, you are not a federal employee, so there is no pension. There are no health benefits.”

If Roe would hire an employee, she would pay insurance and other benefits like any other employer. “It is a business,” she said. Her responsibilities have grown just as the town has grown. She started with 200 boxes. There are now 600 boxes at the facility, 500 are rented.

Roe is not in favor of a proposed move of the post office’s services to Cuddebackville. In the event that happened, Roe would try to negotiate that boxholders keep their box number and same key, and their address would remain Westbrookville, New York.

George Flood, spokesperson for the U.S. Postal Service-Northeast Area, said, “We are continuing to explore our options in response to potential suppliers who recently expressed interest in entering into a contractual agreement with U.S. Postal Service to operate a Community Post Office in Westbrookville.”

Flood said there are no timetables and the USPS-Westchester District which supervises the area will keep the community advised as events develop.

What will happen to the Westbrookville Post Office is still up in the air but “as of this morning I am very optimistic,” Roe said.