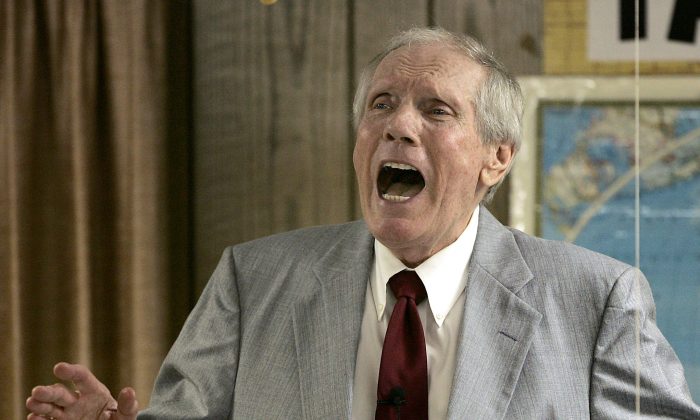 However, a satire article published by the Daily Currant website is going viral, with many people thinking the church issued a statement about people not picketing Phelps’ “funeral.”

“The controversial Westboro Baptist Church has asked the public not to picket the funeral of its founder, Pastor Fred Phelps, who died this week at 84,and ‘have a little decency and respect’ for his family and friends,” it says. “In a statement posted on its website, the Topeka, Kan.-based church – home to America’s most hated family – claimed members of the public have threatened to protest Phelps’ funeral just as the church protested the funerals of others.”

There isn’t going to be a funeral for Phelps, the church confirmed. Margie Phelps, his daughter and church member, told WIBW in Kansas that no funeral is planned.

The Daily Currant has a disclaimer on its website, which says it’s satire.

“The Daily Currant is an English language online satirical newspaper that covers global politics, business, technology, entertainment, science, health and media. It is accessible from over 190 countries worldwide – now including South Sudan,” it reads. “Our mission is to ridicule the timid ignorance which obstructs our progress, and promote intelligence – which presses forward.”

The article about Westboro on the website got tens of thousands of likes.

Phelps died last week while in a care facility.

Once seen as the church’s unchallengeable patriarch, Phelps’ public visibility waned as he grew older and less active in the church’s pickets, with daughters Shirley Phelps-Roper and Margie Phelps — an attorney who argued the church’s case before the U.S. Supreme Court — most often speaking for Westboro. In the fall of 2013, even they were replaced by a church member not related to Phelps by blood as Westboro’s chief spokesman.

In Phelps’ later years, the protests themselves were largely ignored or led to counter-demonstrations that easily shouted down Westboro’s message. A motorcycle group known as the Patriot Guard arose to shield mourners at military funerals from Westboro’s notorious signs.

Phelps’ final weeks were shrouded in mystery. A long-estranged son, Nate Phelps, said his father had been voted out of the congregation in the summer of 2013 “after some sort of falling out,” but the church refused to discuss the matter. Westboro’s spokesman would only obliquely acknowledge this month that Phelps had been moved into a care facility because of health problems.

Margie Phelps did not reveal to The Associated Press on Thursday the condition that put Phelps in hospice care. Asked if he was surrounded by family or friends at his death, she would only say that “all of his needs were met when he died.” There will be no funeral, she said.

Fred Waldron Phelps was born in Meridian, Miss., on Nov. 13, 1929. He was raised a Methodist and once said he was “happy as a duck” growing up. He was an Eagle Scout, ran track and graduated from high school at age 16.