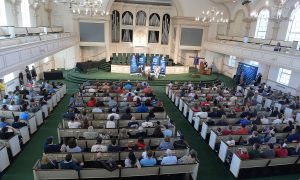 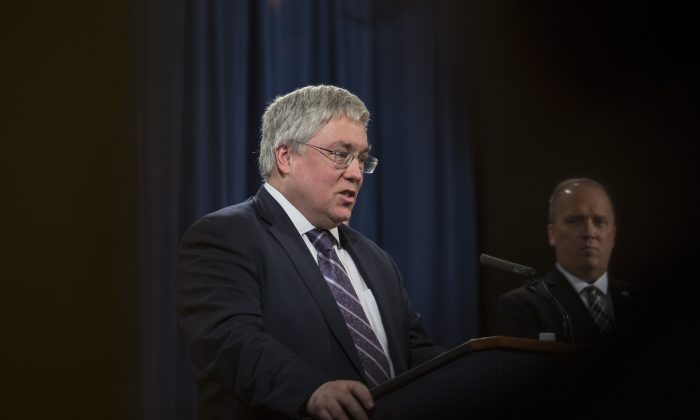 West Virginia Attorney General Patrick Morrisey speaks during a press conference at the Department of Justice in Washington on Feb. 27, 2018. (Toya Sarno Jordan/Getty Images)
US News

West Virginia’s Attorney General filed a lawsuit on March 19 alleging that a Roman Catholic diocese and its former bishop “knowingly employed pedophiles,” thereby ignoring the obvious danger to children, according to a notice from the general’s office.

A copy of the civil complaint alleges the diocese and its bishops, including Bransfield, “chose to cover up, and conceal arguably criminal behavior of admitted child sex abusers.”

The suit alleged that the bishop’s actions lacked transparency and stood in stark contrast to the diocese’s advertised mission of providing a safe learning environment for their children.

“Our investigation reveals a serious need for the Diocese to enact policy changes that will better protect children, just as this lawsuit demonstrates our resolve to pursue every avenue to effectuate change as no one is above the law,” Morrisey said in a statement.

He said that the parents, who had paid and entrusted the diocese to care for their children, deserve “full transparency.”

The investigation, first initiated by Morrisey in September 2018, brought the suit against the diocese and Bransfield for violations of the state’s consumer protection laws, in addition to seeking a permanent court order blocking the diocese from the continuation of any such conduct.

As of January, more than half of the 187 Roman Catholic dioceses across the United States have started investigating clergy child sex abuse claims or have announced plans to do so in the coming months. At the same time, around 20 local, state, or federal investigations, either criminal or civil, have begun since a bombshell Pennsylvania grand jury report detailing widespread abuse by priests was released 2018.

Father Patrick Condron, who had admitted to sexually abusing a student at St. Joseph Preparatory Seminary High School in Vienna, West Virginia, was named in the complaint. The diocese allegedly sent Condron for treatment and later reassigned him to another school—without notifying parents of his history. Condron’s example was just one of many such cases detailed in the complaint.

In a different case, the diocese, despite its knowledge of a credible sex abuse accusation against Victor Frobas in Philadelphia, still ordained Frobas as a priest in West Virginia and years later named him director at Camp Tygart, now known as Camp Bosco, in Huttonsville.

The accusations resulted in Frobas getting treatment, but he was later employed again as a chaplain at Wheeling Central Catholic High School. After that, he received more treatment and eventually prison time for pleading guilty to sexually abusing children in Missouri. He died in 1993. The suit alleges that the diocese failed to notify parents about Frobas upon his assignment to Wheeling Central High.

“Today is a sad day, but the Attorney General still believes there are so many priests and deacons in the Catholic church—who are good men—who will support this effort so we can really seek meaningful changes in how the church handles sexual abuse,” Morrisey said.