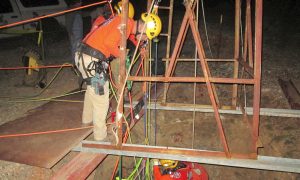 Police in West Virginia issued an arrest warrant for a man whose three friends were rescued earlier this week after he told authorities that they had gotten lost in an abandoned mine.

The Raleigh County, West Virginia, sheriff’s office said late on Dec. 20 that it had brought charges including giving police false information against Eddie Williams, who had been with the other three in the Rock House Powellton mine near the town of Clear Creek, about 50 miles southeast of Charleston.

Williams, 43, found his way out of the mine on Monday and alerted authorities about his missing friends, who were rescued on Wednesday after having been stranded for four days.

Rescue crews, including the West Virginia National Guard and state and local agencies, had already started their search for the four early on Sunday, pumping water out of the mine and sending back fresh air with large fans.

Williams is being sought for “entering without breaking” and conspiracy, as well as giving authorities false information, the sheriff’s office said in a statement. It said it is still investigating the other three, Erica Treadway, 31, Kayla Williams, 25, and Cody Beverly, 21.

The father of Kayla Williams told an ABC News affiliate that he believed the group entered the abandoned mine to look for scrap copper to sell.

“It’s worth money,” Randy Williams told the network after his daughter was rescued. “A couple of years ago it was almost $4 a pound. You could make $1,000 a day.”