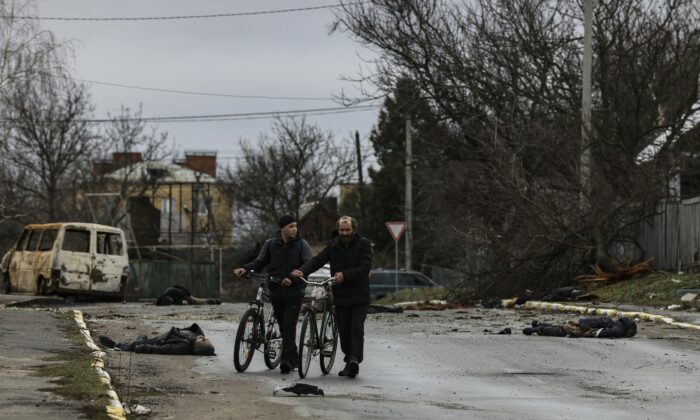 Two person push their bicycle as they cross a street in Bucha, northwest of Kyiv, Ukraine, on April 2, 2022. (Ronaldo Schemidt/AFP via Getty Images)
Russia-Ukraine War

Secretary of State Antony Blinken said the United States is seeking accountability after photos emerged over the weekend that allegedly showed a massacre near Ukraine’s capital as European Union officials promised more sanctions.

“We will … make sure that the relevant institutions and organizations that are looking at this, including the State Department, have everything they need to assess exactly what took place in Ukraine, who’s responsible, and what it amounts to,” Blinken told CNN on Sunday.

Top Ukrainian officials Sunday said that Russian forces massacred civilians in Bucha, located near Kyiv, while Russia’s Ministry of Defense denied those charges. Ukraine’s Ministry of Defense posted a Twitter video allegedly showing the deceased civilians while claiming they were executed with their hands tied behind their backs. The Epoch Times could not verify either Ukraine’s or Russia’s claims.

European officials, meanwhile, promised that more sanctions would be issued against Russia’s economy. Ukrainian President Volodymyr Zelenskyy also renewed his calls to sanction Moscow during an interview with CBS News on Sunday morning.

German Foreign Minister Annalena Baerbock wrote on Twitter: “The images from Bucha are unbearable .. those responsible for these war crimes must be made accountable. We will tighten the sanctions against Russia and will assist Ukraine even more in defending itself.”

The president of the European Commission, Charles Michel, similarly wrote on Twitter that Ukraine’s government and NGOs are gathering evidence and “further EU sanctions [and] support are on their way.” Neither Michel nor Baerbock elaborated on the nature of the sanctions.

Russia’s economy has already been heavily targeted by the EU, United States, and aligned countries since the start of the war on Feb. 24, prompting Russia’s government to demand that European countries pay for Russian gas with rubles instead of other currencies.

“It’s clear to the naked eye that there are a lot of fakes and staged shots,” Peskov told Bloomberg News about the images that allegedly showed dead civilians in Bucha.

“All photographs and video materials published by the Kyiv regime, allegedly showing some kind of ‘crimes’ by Russian military personnel in the town of Bucha … are yet another provocation,” the Russian Ministry of Defense said via state-run media, claiming the bodies were “staged by the Kyiv regime for Western media.”

“It’s particularity concerning that all the bodies of people whose images were published by the Kyiv regime, after at least four days, have not stiffened, do not have characteristic cadaveric spots, and have fresh blood in their wounds,” the agency continued to say.