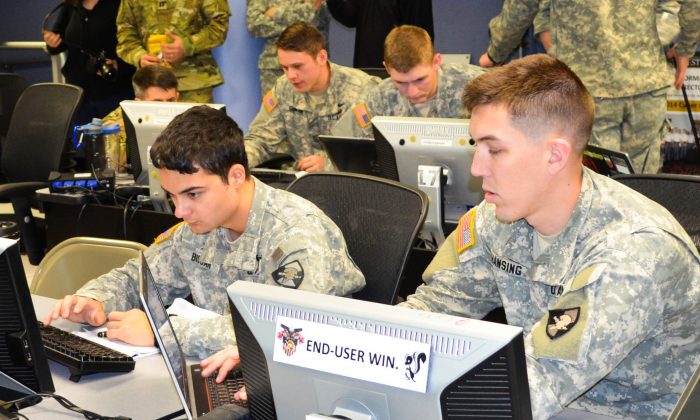 WEST POINT—West Point cadets competed with the U.S. Naval Academy and the Royal Military Academy of Canada in the 16th  annual Cyber Defense Exercise (CDX) on April 11-15 against the National Security Agency.

Cadets successfully defended their networks against the NSA to keep systems online and achieved the highest score when the competition ended.

Each military academy in the exercise was scored on their ability to maintain services, prevent and recover from security breaches, and provide forensic analysis of compromised systems.

“We built a computer network and are defending it against the NSA who is trying to attack us,” said Curtis Gardner, a senior cadet on the team. “We are only playing defense in this.”

The NSA launched attacks on the network of each military academy over a three-day period. The NSA gave each academy points on how they solved hacking attacks which was on a screen in real time.

“At any point in time, we can figure out what the score is,” Gardner said. He pointed to the screen that showed the West Point team in the lead.

The team of 26 cadets provided a web server, email, and a file transfer protocol (ftp) for the users, who could be anyone from a general to a soldier using the system. Most of the team are computer science majors. Others major in information technology, electrical engineering, mechanical engineering, math, and a foreign language.

The exercise teaches students how to protect and defend the nation’s information systems. Like a scrimmage in a football game, players get experience working as a team against an opponent. A referee keeps players within the rules of the game and each team wants to win with the most points.

Several boards provided real-time information to the team. When the team found bad traffic, it was listed on the whiteboard column called Bad Actors.

Gardner said the team designed their network from scratch. “We got switches and routers from the box, brand new.”

Cadets formed five teams—monitoring, networking, systems, services, and forensics. Gardner said each team has their own tasks over the three days. Monitoring logs in all traffic and identify the biggest cyber threats.

The Networking team designed the entire system for the exercise and figured out anything new the NSA might add to their system. The NSA team added a general’s laptop to the cadet’s network. The team had to see if it was infected with any computer virus.

The systems team kept all the network’s services—email, ftp, and web server—working and secure. Gardner called Forensics the “quick reaction force” that had to solve immediate hacking attacks.

Sophomore cadet Adam Van Prooyan worked on the forensics team. He analyzed malware brought by the NSA. He said his team worked on a web app, a kind of internet chatroom, called an ARCbot (Advanced Really Cool bot) the NSA gave them, to see if it was infected.

It was a lot of fun to dig in there and see what may be an attacker would find there and how to fix that.
— Cadet Adam Van Prooyan

This is what he likes to do. “It was a lot of fun to dig in there and see what may be an attacker would find there and how to fix that.” Van Prooyan’s father and grandfather both graduated from West Point. He wants to join the Army’s Cyber Branch as a developer when he graduates.

Maj. W. Michael Petullo and three officers circulated among the students. The officers were on hand to guide the West Point team but were not allowed to directly take part.

Major Karl Olson was deployed in southern Iraq as a network engineer. “You’ll see a lot of mentorship going on,” Olson said. “We work with separate teams to give our experience to help them. We all have our little roles in areas that we work in and we share that knowledge with cadets.”

Olson said there have been some changes from previous years. This year cadets could volunteer and some younger cadets have joined and they can see how the exercise works, “so next year when he comes back, he can be part of the leadership.”

Some cadets were on the NSA team and Olson said they can put that experience to work next year. “They can say ‘We’ve had this experience. We understand how they are operating. How can we change our networks and everything back here to help defend against that.’ We’ve got a lot of moving parts this year.”

I’m helping to guide the students towards a different way to approach or view the problem.
— Staff Sergeant Natasha Orsene

Staff Sergeant Natasha Orsene arrived from the Army’s cyber school in Fort Gordon, GA. “I’m helping to guide the students towards a different way to approach or view the problem. I can’t jump in and say ‘oh, do this or do that,’ but I can ask guiding questions and help them to view it in a different way.”

“These guys are incredibly smart,” Orsene said. “They have already established a lane and a role so that when they work together it’s so cohesive. Actually, I’ve had to do very little.”

Orsene said all officers must go through the training center, called the Cyber Common Technical Corps. She will give a report on the exercise to the cyber school about the exercise. Orsene is a senior instructor there and teaches networking and security.

Referee Paul DeLisio, staff sergeant in the Air Force, was onsite to referee. “I’m here to watch that they do things in accordance with the rules of engagement. Like in a football game…we have to make it equal between all schools.”

The exercises are designed to prepare future military leaders to defend the nation’s computer systems. In 2001 the NSA established the competition, which challenges each team to design, build, and configure a real-world computer network similar to what you would find in today’s military.

Gardner said that cadets with computer expertise can join SIGSAC, a cadet computer club. “After about a year or two they have the opportunity to try out for the C3, the Cadet Cyber Competitive team. They compete all around the country in different types of school-sponsored hacking or defending exercises every month,” he said.

The NSA will present the West Point team in May with the National Security Agency-Director’s Trophy. West Point has won it eight times. Gardner had his opinion on the outcome: “Go Army! Beat Navy!”