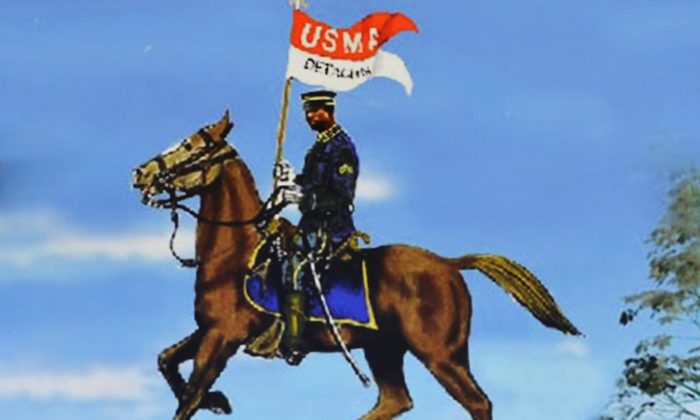 The event honored the last Buffalo Soldier to serve at West Point, Sgt. Sanders H. Matthews, who passed away days before at the age of 95.

Maj. Gen. Fred A. Gorden, retired, presented an artist’s rendering  of what a proposed one and a half-size bronze memorial sculpture would look like. The memorial was designed by renowned memorial sculptor Eddie Dixon.

The event was attended by about 100 members of the Buffalo Soldiers Motorcycle Club, as chapters from various states rode in on their “iron horses.”

President of the West Point chapter of the club, Melvin Smith, said the memorial represents a significant part of the history of Buffalo Soldiers, which Congress formed at the end of the Civil War to give a job to thousands of displaced black soldiers and ex-slaves.

Three infantry units and two cavalry units of black soldiers were assigned to help tame the West for the settlers moving there. Native Americans were the first to call them Buffalo Soldiers for their grit and courage in battle.

Smith said these soldiers became a symbol of pride for African Americans. “All of a sudden you hear the horses coming into town and the cavalry comes in. [Townspeople] see all these black soldiers on horseback, armed, in uniform. They see the [black] sergeant looking at the [white] lieutenant] eye to eye, speaking to him, saluting and getting a return salute, giving orders. That planted a seed.”

At West Point, in 1907 a detachment of the 9th Cavalry was charged with horseback instruction and drill of cadets. In 1937 it was replaced by a squad from the 10th Cavalry, who served at West Point until 1947. The Buffalo Soldiers were considered to have the best riding skills in the army.

Charles Butler, an honorary Buffalo Soldier, said they had other duties such as cutting ice from the river for officers’ food and drink, “which I thought was horrendous. So I stand on their shoulders.”

Butler served in the navy in Korea and as a Tuskegee airman. “They shouldn’t forget what the Buffalo Soldiers did here at this post,” he said.

He said black regular army regiments were formed to keep the peace in the wild and woolly West and the 9th and 10th cavalry became known as Buffalo Soldiers during this period. “There were sharecroppers, writers, painters, cigar makers, cooks, and mechanics,” he said. “They came with a desire to serve.”

They carried out many duties. “They built forts and roads. They patrolled the borders. They arrested whiskey peddlers and captured thieves and outlaws.”

Buffalo Soldiers were among the first riders of the Pony Express and served as the first park rangers in national parks.

Caslen said Buffalo Soldiers were among the first riders of the Pony Express and served as the first park rangers in national parks. “They hunted poachers, and they fought fires.”

He said Buffalo Soldiers earned the respect of Teddy Roosevelt’s Rough Riders during the Spanish-American War. Gen. Pershing fought with the 10th cavalry there and led them to hunt Poncho Villa in Mexico. The Buffalo Soldiers’ motto was “We Can, We Will.”

Caslen noted that 23 Buffalo Soldiers received the Congressional Medal of Honor in military conflicts. He gave a long list of African Americans who graduated from West Point, including Gen. Colin Powell, former chairman of the joint chiefs of staff and former secretary of state.

The superintendent then announced the design of the new bronze memorial to the Buffalo Soldiers that he hoped would inspire future generations of West Point graduates.

Caslen, Black, and Connor Matthews placed the wreath at the memorial rock. A group of West Point cadets stood at attention and were joined by ROTC units at two nearby high schools.

Gorden, the first black Commandant of Cadets at West Point, said the large memorial sculpture has been in the works since 2008. He calls the project “transforming the rock” that is now embedded with the plaque.

Gorden said much time and effort was put in the sculpture’s historical and military accuracy. “It involves the proper accoutrements such as the saber and the saddle, the leggings.” The guidon, or military emblem, on the hat was just one of the items that had to be historically vetted, he said.

The sculpture depicts a trooper mounted on horseback and “captures the expertise and horsemanship and mounted cavalry drill that influenced the selection of these master horsemen for riding instruction at West Point.”

The base of the memorial will incorporate the memorial rock. One image shows the 9th Cavalry with West Point graduate and U.S. President Dwight D. Eisenhower.

“We are well on our way of transforming the rock,” Gorden said. “We just need your support to get it done.”

Matthews was a Buffalo Soldier in the 10th Cavalry in 1939 when he was first stationed at West Point. He served as the first black police officer in the Village of Highland Falls and later returned to West Point driving cadets to cultural and sporting events.

Eddie Dixon‘s first commission was for the Smithsonian Institution and the sculptor became known for the authentic detail in his works. He is presently completing a bust of Gen. Colin Powell.