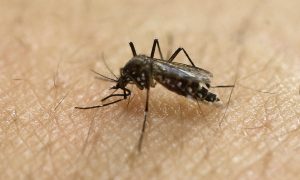 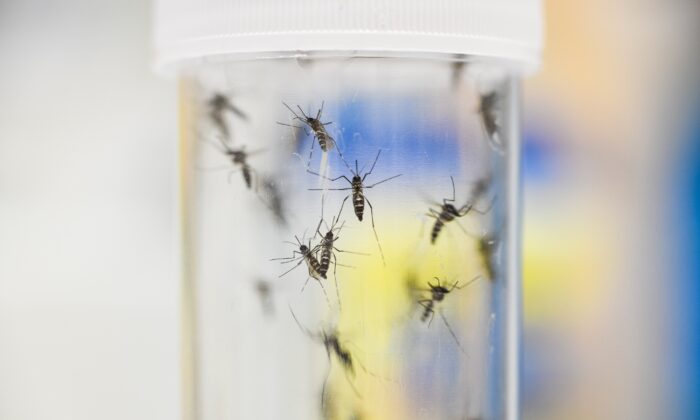 Mosquitoes in a container in a laboratory in Germany, which saw its first case of West Nile virus in 2019, in a 2019 file photograph. (Steffen Kugler/Getty Images)
Southern California

West Nile virus is spread to people through the bite of an infected mosquito. Birds can become sick from the virus, but do not spread the virus directly to people.

“West Nile virus is endemic, which means we’ll detect it every year in our communities,” said MVCD scientific program manager Melissa Doyle. “As the weather heats up, everyone should prevent mosquito bites and eliminate stagnant water around their home.”

According to the Los Angeles County Department of Public Health, one in five individuals infected with the West Nile Virus, for which there is no cure, will exhibit symptoms that include fever, headache, body aches, nausea, or skin rash. The symptoms can last for several days to months.

Those at greatest risk include seniors and individuals with compromised immune systems. People over 50 years old and those with chronic health problems are at higher risk of severe illness. While not all mosquitoes carry this virus, the type of mosquito that spreads the virus is found throughout Los Angeles County.

Mosquitoes in Southern California are generally more active from May to October, and MVCD spokesperson Levy Sun noted that it “only takes one bite for a mosquito carrying West Nile virus to get you sick. Don’t take your chances and assume the next mosquito bite will be harmless.”

Sun also noted that mosquito control “is a responsibility shared by all residents, businesses and property owners.”

The agency also routinely monitors populations of adult mosquitoes using traps, and it tests groups of adult female mosquitoes for the presence of WNV and other mosquito-borne diseases. The agency submits samples from dead birds, such as crows, for testing, which can provide insight into the spread of WNV.