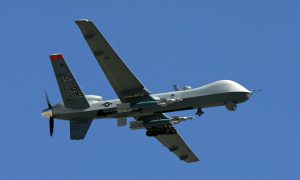 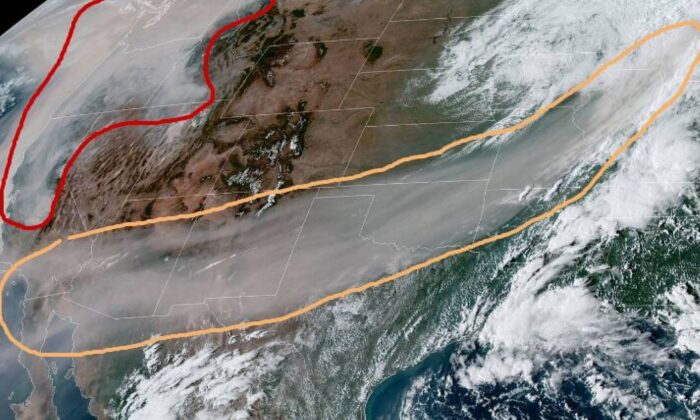 Wildfires in California, Oregon, and Washington state have created hazardous air conditions across the West Coast of the United States as smoke travels thousands of miles.

A satellite image that was published over the weekend shows smoke from the West Coast stretching as far as Michigan, located thousands of miles away.

“Here is a visible satellite image valid at 2pm PDT showing the vast extent of the wildfire smoke,” the Weather Prediction Center wrote on Twitter Saturday. “The area in the orange contour is smoke in the mid-upper levels of the atmosphere that has reached as far east as Michigan! The red contour is the dense smoke near the West Coast.”

International air quality monitoring website IQAir.com reported that air quality in Portland, Oregon, was the worst in the world on Sunday. It said that Vancouver in Canada, Seattle, and San Francisco are in the top 10—beating out massive cities like New Delhi, India; Jakarta, Indonesia; Beijing, China; and Dhaka, Bangladesh.

Oregon cities like Medford, Corvallis, Albany, Eugene, Salem, and Bend all had worse air quality than Portland, according to OregonLive.

The National Weather Service has implemented air quality alerts for much of the West Coast, including parts of California, Idaho, Oregon, and Washington state.

“Air pollutants can cause breathing difficulties for children, the elderly, as well as persons with respiratory problems. Those individuals who are sensitive to increased particulate matter or smoke are encouraged to avoid prolonged or strenuous outdoor activity during this alert. It is also recommended that all other individuals limit prolonged or strenuous activity outdoors,” said the weather agency.

Late Saturday, the Jackson County Sheriff’s office said that four people had died in the wildfire that burned in the Ashland area. Authorities earlier this week said as many as 50 people could be missing from the blaze. But they said the number of people unaccounted for is now down to one.

At least 10 people have been killed in the past week throughout Oregon. Officials have said more people are missing from other blazes, and the number of fatalities is likely to rise. Twenty-two people have died in California, and one person has been killed in Washington state.

Among the people killed was Millicent Catarancuic, who was found near her car at her five-acre home in Berry Creek, California. At one point she was ready to evacuate with her dogs and cats in the car. But she changed her mind as the winds seemed to calm and the flames stayed away. Then the fire changed direction, rushing onto the property too quickly for her to leave. She died, along with her animals.