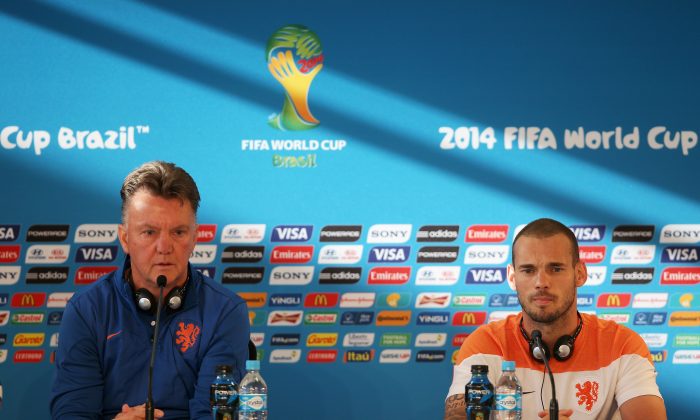 Manager of Netherlands Louis van Gaal and Wesley Sneijder get ready to speak to the media at the Netherlands Press Conference at the 2014 FIFA World Cup Brazil held at the Estadio Beira-Rio on June 17, 2014 in Porto Alegre, Brazil. (Dean Mouhtaropoulos/Getty Images)
Soccer

The 30-year-old attacking midfielder was tipped for a move to Old Trafford after the 2010 World Cup, but chose to move to Turkey instead.

However, Sneijder recently admitted that he won’t mind a move to Man United, where Netherlands coach Louis van Gaal has been appointed manager, if Van Gaal comes knocking.

“In the Netherlands, Van Gaal is something like the head teacher of a school,” Sneijder said.

“Not everyone is lucky enough to get into his good books”

“I am happy at Galatasaray, I have established myself at the club and have settled in”

“However, if Van Gaal were to make me an offer, I would have to at least consider it. Nobody from the Netherlands can simply reject Van Gaal,” Sneijder concluded.

See an Associated Press article of the Netherlands team.

FORTALEZA, Brazil (AP) — Louis van Gaal is preparing his Netherlands squad to face two significant challenges in its World Cup Round of 16 match in this steamy northern Brazilian city — Mexico and the weather.

The Dutch coach said he hopes FIFA will use drink breaks during the match so that players can replenish fluids in Fortaleza’s hot and humid Arena Castelao.

Tests the Dutch have conducted during training in Brazil and pre-tournament friendlies show that some players lose up to four liters (four and a half pints) of fluid during a match.

“Can you imagine that?” Van Gaal said Saturday. “That has to be replenished because otherwise you start hallucinating.”

If FIFA does not have scheduled drinks breaks during the match, Van Gaal said he will take action to ensure his players do not dehydrate.

“Drinks will be along the sidelines if FIFA doesn’t take care of it,” he said.

Leroy Fer, who has been ruled out of the match after injuring his hamstring in training, said the Netherlands team — used to playing in often chilly northern European conditions — got a taste of the heat in training Friday after arriving from its camp in Rio.

“The climate is much warmer than Rio and other places we’ve played, but the other teams have problems with it, too,” he said.

Mexico coach Miguel Herrera said he hoped the heat would help his team.

“We might adapt a bit better because our climate is closer, but we also have players based in Europe,” he said. “But it will be a physical game and hopefully it will be a factor.”

Van Gaal said that apart from Fer, who scored a minute after going on as a substitute against Chile in group play, defender Bruno Martins Indi will not start against Mexico. Martins Indi was concussed in the Netherlands 3-2 win over Australia and Van Gaal said he wasn’t ready to start yet. Striker and captain Robin van Persie is available again after being suspended for the last group match.

Dirk Kuyt, normally a forward, will likely again play left back and win his 100th international cap in the process. He will become the second Dutch player, after Wesley Sneijder, to reach the milestone in Brazil.

After coming to Brazil unburdened by high expectations, the Netherlands has been one of the best teams of the tournament so far, using counterattacking football to record three straight wins and top Group B, scoring 10 goals on the way and conceding only three — two from disputed (by Van Gaal, at least) penalties.

Mexico has stood out mainly due to its stingy defense and great goalkeeper, with Guillermo Ochoa conceding just one goal in three matches as it finished second behind Brazil in Group A on goal difference.

Van Gaal said he considers Mexico an even better team than Chile, which his team beat 2-0 in Sao Paulo last Sunday in a clinical display of staunch defending and swift counterattacking.

“I expect a match like against Chile because there isn’t much difference in the way Chile and Mexico play,” he said. “I think Chile has two outstanding players. Mexico has fewer and that is what makes it a better team.”

Also, the Dutch coach knows that Mexican players are more accustomed to the heat than his squad.

Van Gaal experienced similar heat and humidity when he took an Ajax team to play in Mexico City in the 1990s and felt like he needed way more than the three substitutions available to him.

“My experience from that match was nine of the 11 players needed to be replaced and asked to be replaced,” he said. “That is why we have trained so hard. I hope it is enough. I think the weather is also an opponent for the Netherlands, as well as Mexico.”