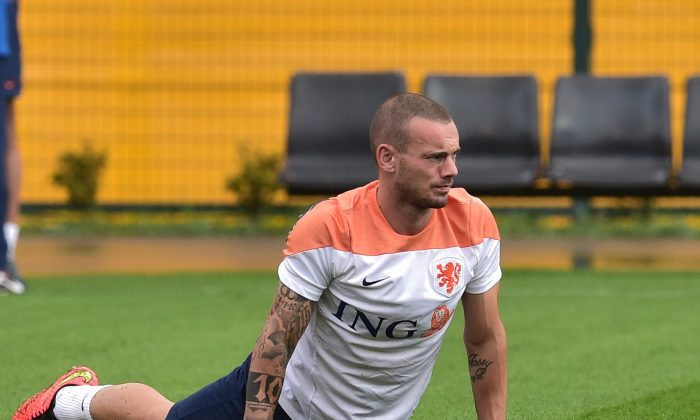 Netherlands' midfielder Wesley Sneijder stretches on the training pitch at The Estádio Paulo Machado de Carvalho (Pacaembu) in Sao Paulo on July 10, 2014, ahead of their third place play-off against host nation Brazil in the 2014 FIFA World Cup. Despite their World Cup semi-final elimination on penalties by Argentina, the Netherlands and their coach Louis van Gaal will move on from the tournament with their reputations unquestionably enhanced. (NELSON ALMEIDA/AFP/Getty Images)
Soccer

Wesley Sneijder has been ruled out of the FIFA World Cup 2014 Third place match after injuring himself during warmups.

Jonathan De Guzman will replace the 30-year-old, according to BBC Sport.

BRASILIA, Brazil (AP) — Right back Maxwell and striker Jo are among the players entering Brazil’s lineup for the third-place match against the Netherlands on Saturday.

Coach Luiz Felipe Scolari made four other changes from the team that started the devastating 7-1 loss to Germany in semifinals. Captain Thiago Silva, who missed the match against Germany because of a yellow card suspension, was back in the lineup as expected, but the coach also included three new midfielders: Willian, Ramires and Paulinho.

Dutch coach Louis Van Gaal, in his final match with the Netherlands before joining Manchester United, made only one change from the team that lost on penalties to Argentina in the semifinals. He replaced Nigel de Jong, who earlier in the tournament had a groin injury, with Jordy Clasie.